In the lunar eclipse above, sunlight scattered into the Earth’s shadow after passing around the planet’s edge and through its dusty atmosphere can make the Moon take on dramatic shades of red during totality. Continue reading to see more pictures of solar, lunar eclipses.

5. A Partial Eclipse Over Manila Bay 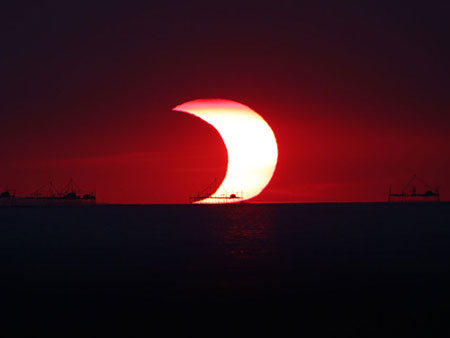 In early 2009, the Moon eclipsed part of the Sun as visible from parts of Africa, Australia, and Asia. In particular the above image, taken from the Mall of Asia seawall, caught a partially eclipsed Sun setting over Manila Bay in the Philippines. Piers are visible in silhouette in the foreground. Eclipse chasers and well placed sky enthusiasts captured many other interesting and artistic images of the year’s only annular solar eclipse, including movies, eclipse shadow arrays, and rings of fire. 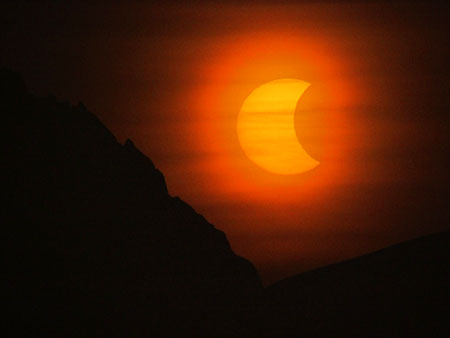 The fourth and final partial solar eclipse of 2011 was only visible from high latitudes in the southern hemisphere. Check out this dramatic picture of the geocentric celestial event from a very high southern latitude on the continent of Antarctica. From a camera positioned at San Martin Station (Argentina) near the antarctic peninsula mountain range, the picture looks toward the south and east. The Sun and silhouetted lunar disk are seen through thin, low clouds. 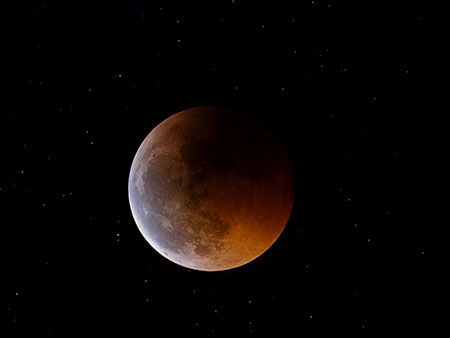 In this sharp portrait of the eclipsed Moon from Granada, Spain, the Moon’s edge reflects a bluish tinge as well as it emerges from Earth’s umbral shadow. The bluer light is still filtered through Earth’s atmosphere, but originates in rays of sunlight passing through layers high in the upper stratosphere. That light is colored by ozone that absorbs red light and transmits bluer hues. 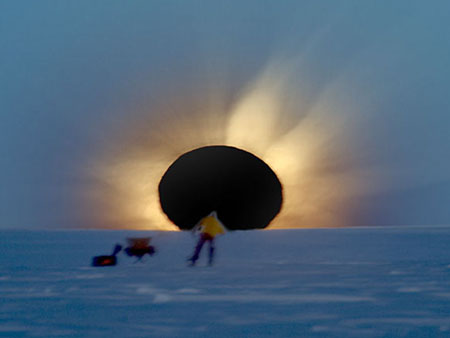 Would you go to the end of the world to see a total eclipse of the Sun? If you did, would you be surprised to find someone else there already? In 2003, the Sun, the Moon, Antarctica, and two photographers all lined up in Antarctica during an unusual total solar eclipse. Even given the extreme location, a group of enthusiastic eclipse chasers ventured near the bottom of the world to experience the surreal momentary disappearance of the Sun behind the Moon. One of the treasures collected was the above picture — a composite of four separate images digitally combined to realistically simulate how the adaptive human eye saw the eclipse. 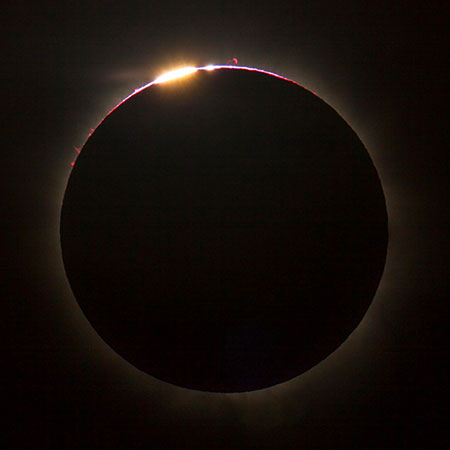 From along the track, this telescopic snapshot captures the Moon’s silhouette in skies over Queensland along the Mulligan highway west of Port Douglas. Almost completely covered, the Sun’s disk is seen still surrounded by a hint of the faint solar corona. Planet-sized prominences stretch above the active Sun’s edge. Sunlight streaming through gaps in the rugged profile of the lunar limb creates the brilliant but fleeting Baily’s Beads.

Have you ever experienced a total eclipse of the Sun? The above time-lapse movie depicts such an eclipse in dramatic detail as visible from Australia last month. As the video begins, a slight dimming of the Sun and the surrounding Earth is barely perceptible. Suddenly, as the Moon moves to cover nearly the entire Sun, darkness sweeps in from the left — the fully blocked part of the Sun.

At totality, only the bright solar corona extends past the edges of the Moon, and darkness surrounds you. Distant horizons are still bright, though, as they are not in the darkest part of the shadow. At mid-totality the darkness dips to the horizon below the eclipsed Sun, created by the shadow cone — a corridor of shadow that traces back to the Moon. As the total solar eclipse ends — usually after a few minutes — the process reverses and Moon’s shadow moves off to the other side. Solar eclipses can frequently be experienced at gatherings organized along the narrow eclipse path as well as specialized cruises and plane flights.

You Won’t Believe How This Carpenter Hid a Bathroom