A spiral galaxy essentially consist of a flat, rotating disk containing stars, gas and dust, and a central concentration of stars known as the bulge. These are surrounded by a much fainter halo of stars, many of which reside in globular clusters. Above, we have NGC 1309, which spans about 30,000 light-years, making it about one third the size of our larger Milky Way galaxy. Continue reading to see more. 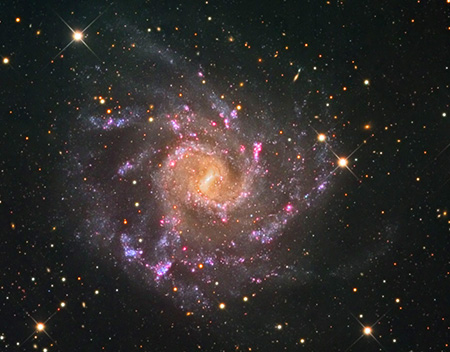 The grand, winding arms are almost mesmerizing in this face-on view of NGC 7424, a spiral galaxy with a prominent central bar. About 40 million light-years distant in the headlong constellation Grus, this island universe is also about 100,000 light-years across making it remarkably similar to our own Milky Way.

Following along the winding arms, many bright clusters of massive young stars can be found. The star clusters themselves are several hundred light-years in diameter. And while massive stars are born in the arms of NGC 7424, they also die there. Notably, this galaxy was home to a powerful stellar explosion, supernova SN 2001ig, which faded well before the above image was recorded. 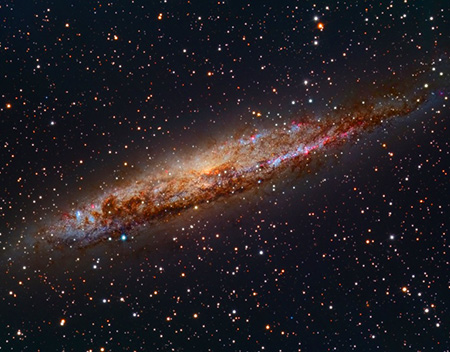 Large spiral galaxy NGC 4945 is seen edge-on near the center of this cosmic galaxy portrait. In fact, NGC 4945 is almost the size of our own Milky Way Galaxy. Its own dusty disk, young blue star clusters, and pink star forming regions standout in the sharp, colorful telescopic image. About 13 million light-years distant toward the expansive southern constellation Centaurus, NGC 4945 is only about six times farther away than Andromeda, the nearest large spiral galaxy to the Milky Way.

Though the galaxy’s central region is largely hidden from view for optical telescopes, X-ray and infrared observations indicate significant high energy emission and star formation in the core of NGC 4945. Its obscured but active nucleus qualifies the gorgeous island universe as a Seyfert galaxy and likely home to a central supermassive black hole. 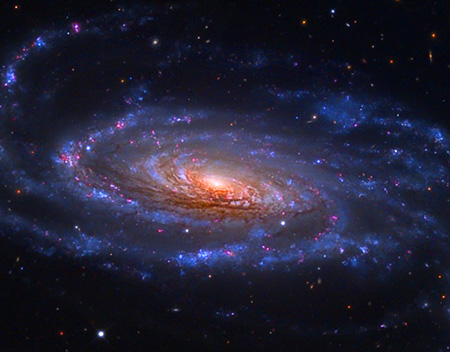 Speckled with pink star forming regions and massive blue star clusters, the arms span over 100,000 light-years, similar in size to our own spiral Milky Way. A well-studied example of the class of Seyfert active galaxies, NGC 5033 has a core that is very bright and variable. The emission is likely powered by a supermassive black hole. The bright nucleus and rotational center of the galaxy also seem to be slightly offset, suggesting NGC 5033 is the result of an ancient galaxy merger. 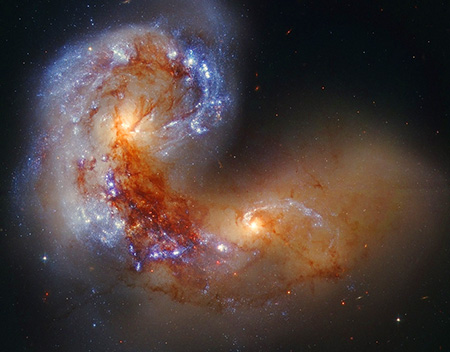 This galaxy is having a bad millennium. In fact, the past 100 million years haven’t been so good, and probably the next billion or so will be quite tumultuous. Visible on the upper left, NGC 4038 used to be a normal spiral galaxy, minding its own business, until NGC 4039, toward its right, crashed into it. The evolving wreckage, known famously as the Antennae, is pictured above.

As gravity restructures each galaxy, clouds of gas slam into each other, bright blue knots of stars form, massive stars form and explode, and brown filaments of dust are strewn about. Eventually the two galaxies will converge into one larger spiral galaxy. Such collisions are not unusual, and even our own Milky Way Galaxy has undergone several in the past and is predicted to collide with our neighboring Andromeda Galaxy in a few billion years. The frames that compose this image were taken by the orbiting Hubble Space Telescope by professional astronomers to better understand galaxy collisions. 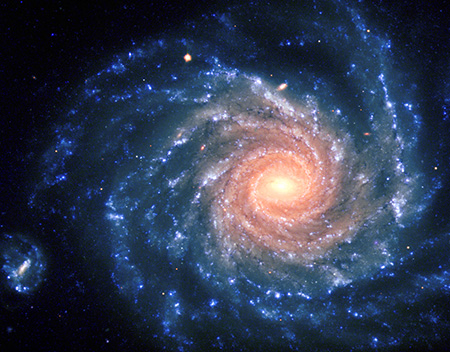 Galaxies are fascinating not only for what is visible, but for what is invisible. Grand spiral galaxy NGC 1232, captured in detail by one of the new Very Large Telescopes, is a good example. The visible is dominated by millions of bright stars and dark dust, caught up in a gravitational swirl of spiral arms revolving about the center.

Open clusters containing bright blue stars can be seen sprinkled along these spiral arms, while dark lanes of dense interstellar dust can be seen sprinkled between them. Less visible, but detectable, are billions of dim normal stars and vast tracts of interstellar gas, together wielding such high mass that they dominate the dynamics of the inner galaxy. Invisible are even greater amounts of matter in a form we don’t yet know – pervasive dark matter needed to explain the motions of the visible in the outer galaxy.