Here’s a mind-blowing look at supernovae, stellar explosions in space. Supernovae are extremely luminous and cause a burst of radiation that often briefly outshines an entire galaxy, before fading from view over several weeks or months. During this short interval a supernova can radiate as much energy as the Sun is expected to emit over its entire life span. Approximately 25-years-ago, in 1987, the brightest supernova (1987A) in recent history was seen in the Large Magellanic Cloud. At the center of the above picture is an object central to the remains of the violent stellar explosion. Continue reading to see more. 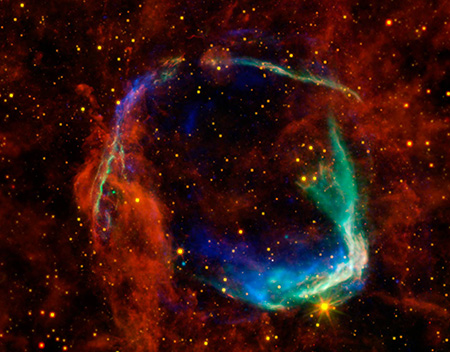 In 185 AD, Chinese astronomers recorded the appearance of a new star in the Nanmen asterism – a part of the sky identified with Alpha and Beta Centauri on modern star charts. The new star was visible for months and is thought to be the earliest recorded supernova. This multiwavelength composite image from orbiting telescopes of the 21st century, XMM-Newton and Chandra in X-rays, and Spitzer and WISE in infrared, shows RCW 86, understood to be the remnant of that stellar explosion. 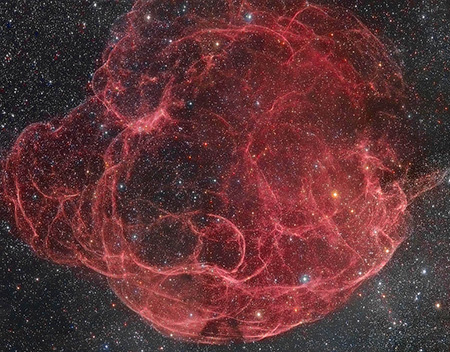 It’s easy to get lost following the intricate filaments in this detailed mosaic image of faint supernova remnant Simeis 147. Also cataloged as Sh2-240 and seen towards the constellation Taurus, it covers nearly 3 degrees (6 full moons) on the sky. That corresponds to a width of 150 light-years at the stellar debris cloud’s estimated distance of 3,000 light-years. The remarkable composite includes image data taken through narrow-band filters to highlight emission from hydrogen and oxygen atoms tracing regions of shocked, glowing gas. This supernova remnant has an estimated age of about 40,000 years – meaning light from the massive stellar explosion first reached Earth 40,000 years ago. But this expanding remnant is not the only aftermath. 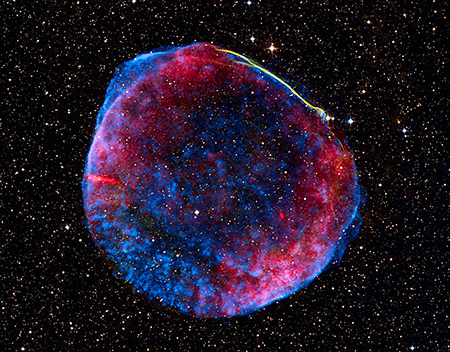 A new star, likely the brightest supernova in recorded human history, lit up planet Earth’s sky in the year 1006 AD. The expanding debris cloud from the stellar explosion, found in the southerly constellation of Lupus, still puts on a cosmic light show across the electromagnetic spectrum. In fact, this composite view includes X-ray data in blue from the Chandra Observatory, optical data in yellowish hues, and radio image data in red. Now known as the SN 1006 supernova remnant, the debris cloud appears to be about 60 light-years across and is understood to represent the remains of a white dwarf star. Part of a binary star system, the compact white dwarf gradually captured material from its companion star. The buildup in mass finally triggered a thermonuclear explosion that destroyed the dwarf star. Because the distance to the supernova remnant is about 7,000 light-years, that explosion actually happened 7,000 years before the light reached Earth in 1006. 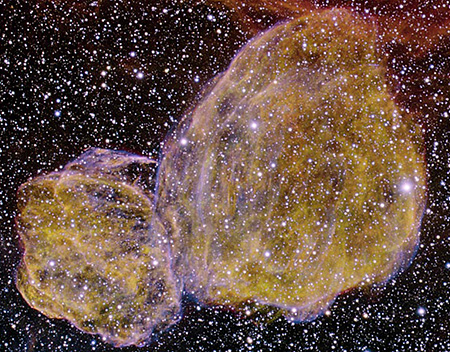 Are these two supernova shells related? To help find out, the 8-meter Gemini Telescope located high atop a mountain in Chile was pointed at the unusual, huge, double-lobed cloud dubbed DEM L316. The resulting image, shown above, yields tremendous detail. Inspection of the image as well as data taken by the orbiting Chandra X-Ray Observatory indicate how different the two supernova remnants are. In particular, the smaller shell appears to be the result of Type Ia supernova where a white dwarf exploded, while the larger shell appears to be the result of a Type II supernova where a massive normal star exploded. Since those two stellar types evolve on such different time scales, they likely did not form together and so are likely not physically associated. 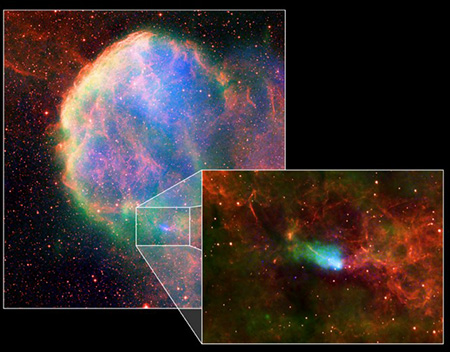 IC 443 is typical of the aftermath of a stellar explosion, the ultimate fate of massive stars. Seen in this false-color composite image, the supernova remnant is still glowing across the spectrum, from radio (blue) to optical (red) to x-ray (green) energies — even though light from the stellar explosion that created the expanding cosmic cloud first reached planet Earth thousands of years ago. The odd thing about IC 443 is the apparent motion of its dense neutron star, the collapsed remnant of the stellar core. The close-up inset shows the swept-back wake created as the neutron star hurtles through the hot gas, but that direction is not aligned with the direction toward the apparent center of the remnant. The misalignment suggests that the explosion site was offset from the center or that fast-moving gas in the nebula has influenced the wake. The wide view of IC 443, also known as the Jellyfish nebula, spans about 65 light-years at the supernova remnant’s estimated distance of 5,000 light-years.

5 Incredible Pictures of the Orion Nebula

Meet Tonik, the Dog with a Human-Like Face