The starship-like object you see above is located 100 million miles from Earth,and may really be the aftermath of a hypervelocity collision between two asteroids. The object, called P/2010 A2, was first discovered by the LINEAR (Lincoln Near-Earth Asteroid Research program) sky survey on January 6, 2010. Continue reading for more. 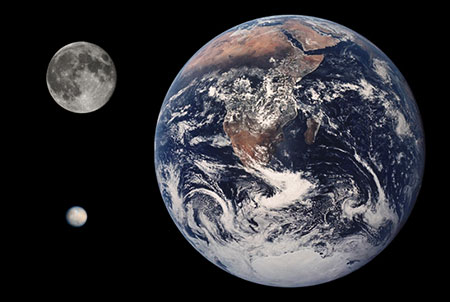 Ceres (lower left) is the largest object in the asteroid belt, which lies between the orbits of Mars and Jupiter. It is a ball of rock and ice 950 km (590 mi) in diameter, containing a third of the mass of the asteroid belt. It is the largest asteroid, and the only dwarf planet in the inner Solar System. It was the first asteroid to be discovered, on 1 January 1801 by Giuseppe Piazzi in Palermo, though at first it was considered to be a planet. The unmanned Dawn spacecraft is scheduled to arrive at Ceres in early 2015. Ceres appears to be differentiated into a rocky core and icy mantle, and may harbor an ocean of liquid water under its surface. 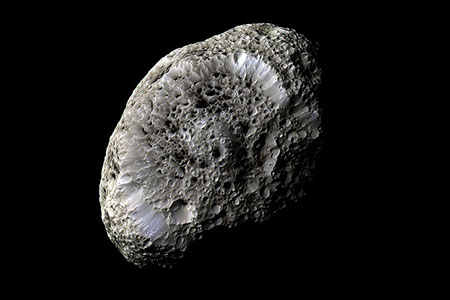 Hyperion is the largest moon in the solar system that isn’t spherical, and it looks like a sponge to boot. It never rotates quite the same way because Titan, a nearby moon, keeps pulling it in different directions. The moon is named after Hyperion, the Titan god of watchfulness and observation – the elder brother of Cronus, the Greek equivalent of Saturn – in Greek mythology. It is also designated Saturn VII. The adjectival form of the name is Hyperionian. 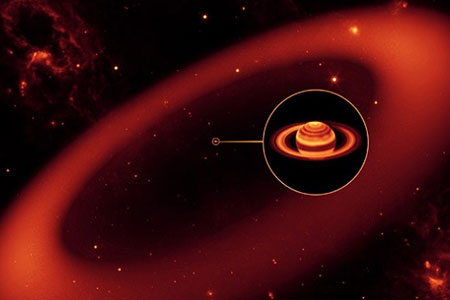 We didn’t know until recently that Saturn’s ring system extends much farther than we first thought. This mega ring is made of dust and ice and has eluded discovery for so long because it can only be viewed in infrared. The sheer size of the ring is hard to visualize, as it begins 6-million kilometers (3.7-million miles) from Saturn and extends all the way out to 12 million kilometers (7.5 million miles), making it 20 times as thick as the planet’s height. In other words, you’d have to use one billion Earths to fill the space the ring takes up. 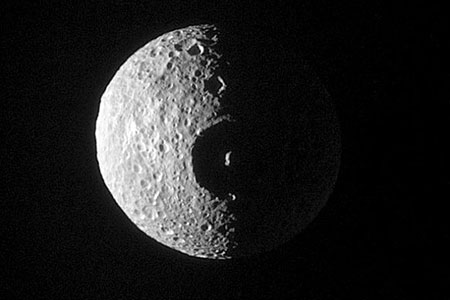 Aside from looking like the Death Star, Mimas is a moon of Saturn that has a surface area slightly less than the land area of Spain. The low density of Mimas, 1.15 g/cm3, indicates that it is composed mostly of water ice with only a small amount of rock. Due to the tidal forces acting on it, Mimas is noticeably prolate; its longest axis is about 10% longer than the shortest. 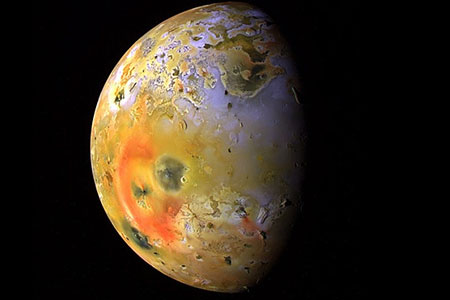 Io is the innermost of the four Galilean moons of the planet Jupiter and, with a diameter of 3,642 kilometres (2,263 mi), the fourth-largest moon in the Solar System. With over 400 active volcanoes, Io is the most geologically active object in the Solar System. This extreme geologic activity results from tidal heating from friction generated within Io’s interior when it is pulled between Jupiter and the other Galilean satellites – Europa, Ganymede and Callisto. Several volcanoes produce plumes of sulfur and sulfur dioxide that climb as high as 500 km (300 mi) above the surface. Io’s surface is also dotted with more than 100 mountains that have been uplifted by extensive compression at the base of Io’s silicate crust.

Staying On This Ultra Luxurious Vessel Costs $1.29-Million Per Week, 20 Pictures Show Why