Sometimes, less is more, and in the case of gadgets, that means transparent designs. For example, the “Water Watch” above was designed to look like it was crafted from a single block of ice. Unfortunately, it doesn’t pack all the features you’d expect from a modern digital watch. Continue reading to see more. 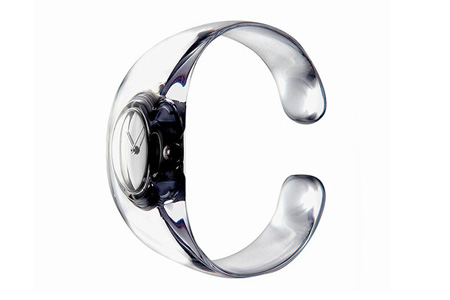 In celebration of the 10th anniversary of the Issey Miyake watch project, Japanese designer Tokujin Yoshioka created an incredible transparent watch that “is suppose to look as if it’s been sculpted of water or from a block of ice.” No word yet on if this watch will be released to the public. 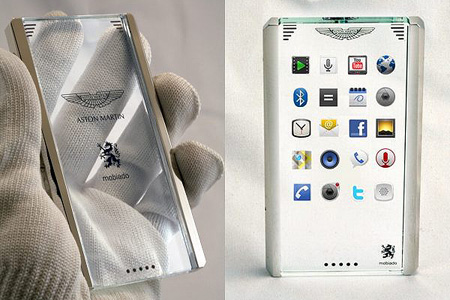 Called the CPT002, this transparent glass Aston Martin phone by Mobiado “can control many of the car’s functions.” Aside from its stunning looks, “cameras integrated into the vehicle can be set to periodically update Facebook and Twitter with pictures, video, and information of passing cities/landmarks during road trips.”

TDK has unveiled an innovative OLED display that is not only transparent, but flexible as well. At $1000, it’s “available now to manufacturers in monochrome and in a lovely color variant by the end of the year.” At two inches, they offer 200ppi pixel density and are more secure than you might think: the light only shines in one direction, so you actually can’t see any data from the back even though you can still see through the display.

How about a cell phone that’s capable of being twisted at will and boasts a transparent form factor to boot? Introducing the Nokia Twist. This cell phone “explores the promise of nanotechnology and emotional interactions in a dynamically flexible device that goes beyond being just another touch screen.”

No, this plane doesn’t have other worldly technology, but rather boasts a “lightweight bionic structure that mimics the bones in birds and could allow for the kind of transparent canopy pictured above.” Plus, there’s a “‘Smart Tech’ zone and a ‘Vitalizing’ zone, separated by the ‘Interaction” zone.'” The Smart Tech section in the rear of the plane will be where you can get work done or enjoy some video on the holographic screen, while in the Vitalizing room up front you can watch the world go by through the transparent fuselage while seated in a massage chair.

What Abraham Lincoln Would Look Like in Dragon Ball Z