Mars is the fourth planet from the Sun and the second smallest planet in the Solar System. Above, we see NASA’s robotic Curiosity rover stopped near a place dubbed Rocknest as it continues to explore Gale Crater on Mars. Continue reading to see more. 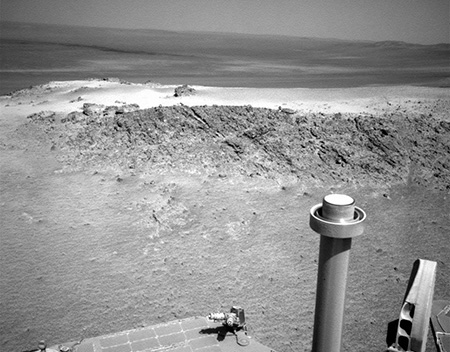 Where on Mars should you spend the winter? As winter approached in the southern hemisphere of Mars last November, the Opportunity rover had just this problem — it needed a place to go. The reduced amount of sunlight impacting Opportunity’s solar panels combined with the extra power needed to keep equipment warm could drain Opportunity’s batteries.

Therefore Opportunity was instructed to climb onto the 15 degree incline of Greeley’s Haven, shown as the rocky slope ahead. The incline increased power input as Opportunity’s solar panels now have greater exposure to sunlight, while also giving the rolling robot some interesting landscape to explore. Visible in the distance, beyond Greeley Haven, lies expansive Endeavour Crater, the ancient impact basin that Opportunity will continue exploring as the Martian winter concludes in a few months, if it survives. 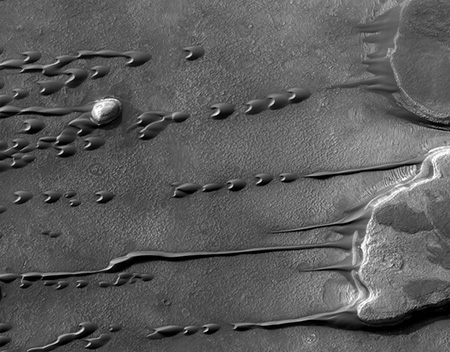 When does Mars act like a liquid? Although liquids freeze and evaporate quickly into the thin atmosphere of Mars, persistent winds may make large sand dunes appear to flow and even drip like a liquid. Visible on the above image right are two flat top mesas in southern Mars when the season was changing from Spring to Summer.

A light dome topped hill is also visible on the far left of the image. As winds blow from right to left, flowing sand on and around the hills leaves picturesque streaks. The dark arc-shaped droplets of fine sand are called barchans, and are the interplanetary cousins of similar Earth-based sand forms. Barchans can move intact a downwind and can even appear to pass through each other. When seasons change, winds on Mars can kick up dust and are monitored to see if they escalate into another of Mars’ famous planet-scale sand storms. 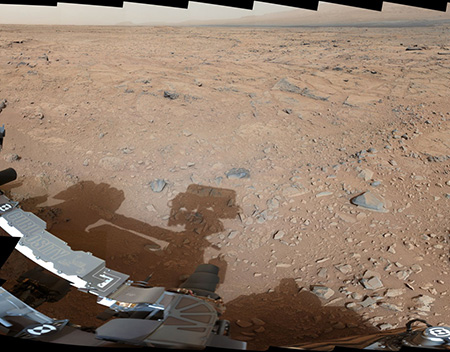 What if you saw your shadow on Mars and it wasn’t human? Then you might be the robotic Curiosity rover currently exploring Mars. Curiosity landed in Gale Crater last August and has been busy looking for signs of ancient running water and clues that Mars could once have harbored life.

Pictured above, Curiosity has taken a wide panorama that includes its own shadow in the direction opposite the Sun. The image was taken in November from a location dubbed Point Lake, although no water presently exists there. Curiosity has already discovered several indications of dried streambeds on Mars, and is scheduled to continue its exploration by climbing nearby Mt. Sharp over the next few years. 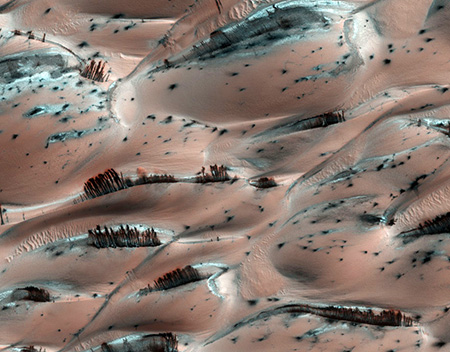 They might look like trees on Mars, but they’re not. Groups of dark brown streaks have been photographed by the Mars Reconnaissance Orbiter on melting pinkish sand dunes covered with light frost. The above image was taken in 2008 April near the North Pole of Mars. At that time, dark sand on the interior of Martian sand dunes became more and more visible as the spring Sun melted the lighter carbon dioxide ice.

When occurring near the top of a dune, dark sand may cascade down the dune leaving dark surface streaks — streaks that might appear at first to be trees standing in front of the lighter regions, but cast no shadows. Objects about 25 centimeters across are resolved on this image spanning about one kilometer. Close ups of some parts of this image show billowing plumes indicating that the sand slides were occurring even when the image was being taken.

3. Curiosity on Mars: A Wall of Gale Crater 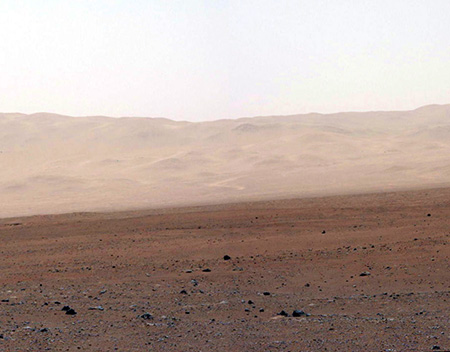 If you could stand on Mars, what would you see? The above image is a digitally re-colored approximation of what you might see if the above Martian landscape had occurred on Earth. Images from Mars false-colored in this way are called white balanced and useful for planetary scientists to identify rocks and landforms similar to Earth.

The image is a high resolution version of a distant wall of Gale Crater captured by the Curiosity rover that landed on Mars last week. A corresponding true color image exists showing how this scene actually appears on Mars. The robotic Curiosity rover continues to check itself over and accept new programming from Earth before it begins to roll across Mars and explore a landscape that has the appearance of being an unusually layered dried river bed. 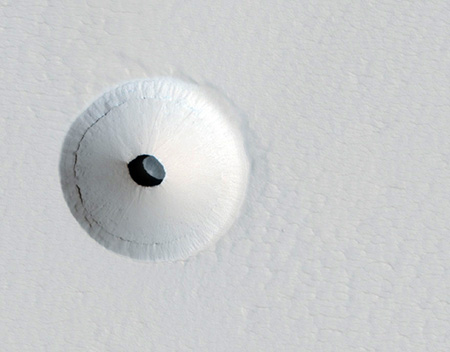 What created this unusual hole in Mars? The hole was discovered by chance on images of the dusty slopes of Mars’ Pavonis Mons volcano taken by the HiRISE instrument aboard the robotic Mars Reconnaissance Orbiter currently circling Mars. The hole appears to be an opening to an underground cavern, partly illuminated on the image right. Analysis of this and follow-up images revealed the opening to be about 35 meters across, while the interior shadow angle indicates that the underlying cavern is roughly 20 meters deep.

Why there is a circular crater surrounding this hole remains a topic of speculation, as is the full extent of the underlying cavern. Holes such as this are of particular interest because their interior caves are relatively protected from the harsh surface of Mars, making them relatively good candidates to contain Martian life. These pits are therefore prime targets for possible future spacecraft, robots, and even human interplanetary explorers. 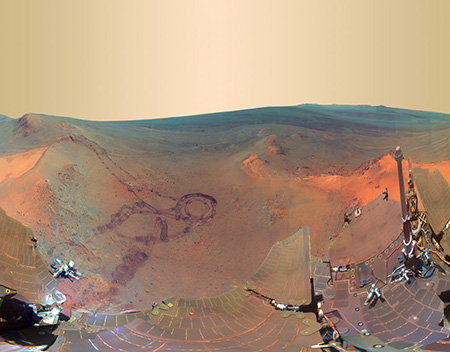 What did you do over your winter vacation? If you were the Opportunity rover on Mars, you spent four months of it stationary and perched on the northern slope of Greeley Haven — and tilted so that your solar panels could absorb as much sunlight as possible. During its winter stopover, the usually rolling robot undertook several science activities including snapping over 800 images of its surroundings, many of which have been combined into this 360-degree digitally-compressed panorama and shown in exaggerated colors to highlight different surface features.

Past tracks of Opportunity can be seen toward the left, while Opportunity’s dust covered solar panels cross the image bottom. Just below the horizon and right of center, an interior wall of 20-kilometer Endeavour Crater can be seen. Now that the northern Martian winter is over, Opportunity is rolling again, this time straight ahead (north). The rover is set to investigate unusual light-colored soil patches as it begins again to further explore the inside of Endeavour, a crater that may hold some of the oldest features yet visited.

According to modern theorists, Mars exists on the outer edge of the habitable zone a region of the Solar System where life can exist. Mars is on the border of a region known as the extended habitable zone where concentrated greenhouse gases could support the liquid water on the surface at sufficient atmospheric pressure. Therefore Mars has the potential to support a hydrosphere and biosphere.

It has been suggested that Mars once had an environment relatively similar to that of Earth during an earlier stage in its development. While water appears to have once existed on the Martian surface, it now only appears to exist at the poles and just below the planetary surface as permafrost. The lack of both a magnetic field and geologic activity on Mars may be a result of its relatively small size, which allowed the interior to cool more quickly than Earth’s, though the details of such a process are still not well understood.

Fascinating Look at Lily, the Tiny Lionhead Bunny with a Homemade Wheelchair