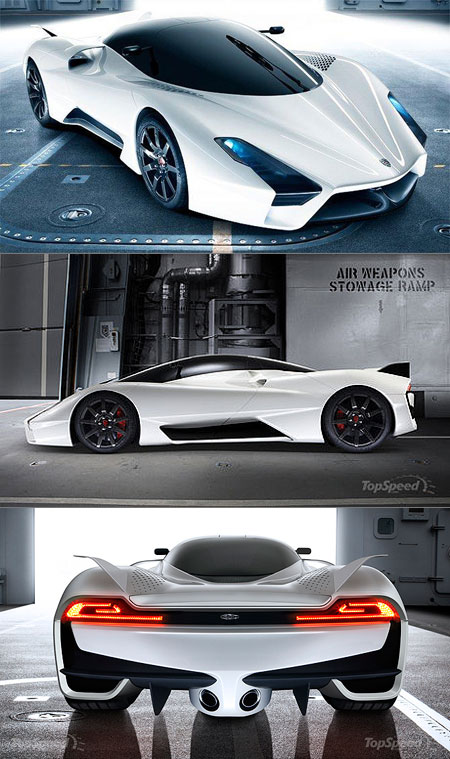 Yes, this list includes the Veyron (lowest hp on the list), but for those who don’t keep up to date with the latest supercars, there are many others that come with over 1000 horsepower from the factory. Unfortunately, they’ll all cost you a pretty penny. Continue reading to see more.

The Koenigsegg CCXR is a specially modified version of the CCX, easily recognized by its unpainted carbon fibre body. Only six of these special order examples were built. The CCXR has to be the first environmentally friendly million-dollar supercar. It runs on E-85 biofuel, the ethanol cools the combustion chambers and the higher octane value increases horsepower. The twin-supercharged 4.7 litre biofuel V-8 CCXR weighs 1.2 tonnes, is capable of 0-100 km/h in 3 seconds and has a top speed exceeding 400 km/h.

The 1,104-hp Zenvo ST1 is a 100 percent Danish product. The cutting-edge, sharp lines and simplicity that is often associated with Danish design makes it a stunning car to look at. Everything about the Zenvo is over the top, from its turbocharged and supercharged 7.0-litre V-8 engine to the yards of carbon fibre covering its chassis. The transmission is a 6-speed manual that drives the rear wheels. This supercar has a 0-100 km/h time of 3.2 seconds and boasts a top speed of 373 km/h (233 mph) the top speed is electronically limited.

I can tell you from experience there’s no missing the sound of the 1,200-hp twin-turbo V8 Hennessey Venom GT from inside the cockpit, but that’s not stopping the Texas company from removing the car’s top in pursuit of even more glorious decibels with their 2013 Hennessey Venom GT Spyder. Hennessey says they’re planning to produce five Venom GTs for the 2013 model year. Two have already been spoken for, including this gorgeous black-on-black Spyder. The fixed-roof hardtop costs $950,000 while the GT Spyder will set you back $1.1 million.

The chassis and body is made entirely out of carbon fiber weighing approximately 1,134 kg. Fitted with the option high horsepower engine the 1,300-hp version has a power to weight ratio of a formula one racing car. The heavily modified 8.2 litre Chevrolet V-8 engine is mated to a Tremec six-speed manual transmission and capable of 328 km/h.

In addition to the tantalizing imagery, we get some facts and figures. For starters, this new Ultimate Aero is powered by a 6.8-liter twin-turbocharged V8 that can scream up to a 9,000 rpm redline. Power? 1,350 horses, every last drop of which will be needed to hit the targeted top speed of 275 mph. Obviously, this rocketship won’t be available for short money; it’s going to cost $970,000.

Nicknamed “The Land Shark”, this car weighs a full 250 kg (551 lbs) less than the already lightened GTR XX, coming in at 861 kg (1898 lbs) with its fuel tanks full. Yes, we said “tanks”, as in plural. This car runs on a multi-fuel system using petrol, methanol, hydrogen, and ethanol. Gocha says his car utilizes an engine with a 381 cubic inch plant generating an unbelievable 2,500 horsepower, in part thanks to the twin turbos.