An aurora is basically a natural light display in the sky particularly in the high latitude (Arctic and Antarctic) regions, caused by the collision of energetic charged particles with atoms in the high altitude atmosphere (thermosphere). The charged particles originate in the magnetosphere and solar wind and, on Earth, are directed by the Earth’s magnetic field into the atmosphere. Continue reading to see seven more mind-blowing pictures. 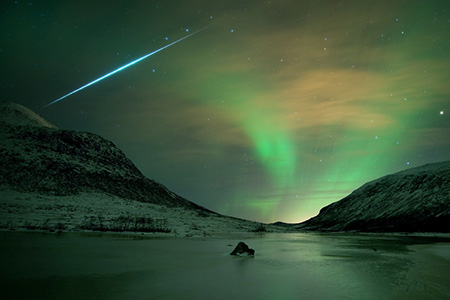 Northern Lights, or aurora borealis, haunted skies over the island of Kvaloya, near Tromso Norway on December 13. This 30 second long exposure records their shimmering glow gently lighting the wintery coastal scene. A study in contrasts, it also captures the sudden flash of a fireball meteor from December’s excellent Geminid meteor shower.

Streaking past familiar stars in the handle of the Big Dipper, the trail points back toward the constellation Gemini, off the top of the view. Both aurora and meteors occur in Earth’s upper atmosphere at altitudes of 100 kilometers or so, but aurora are caused by energetic charged particles from the magnetosphere, while meteors are trails of cosmic dust. 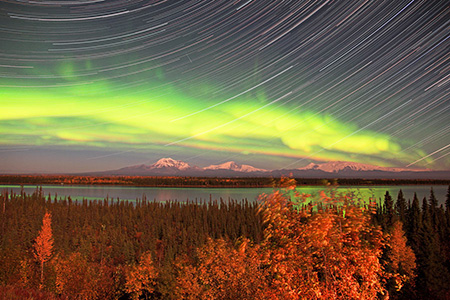 Are those green clouds or aurora? Photographed above two weeks ago, puffy green aurora help the Moon illuminate the serene Willow Lake and the snowy Wrangell and Saint Elias Mountains in eastern Alaska, USA. Although auroras might first appear to be moonlit clouds, they only add light to the sky and do not block background stars from view.

Called northern lights in the northern hemisphere, auroras are caused by collisions between charged particles from the magnetosphere and air molecules high in the Earth’s atmosphere. If viewed from space, auroras can be seen to glow in X-ray and ultraviolet light as well. Predictable auroras likely occur a few days after a powerful magnetic event has been seen on the Sun. 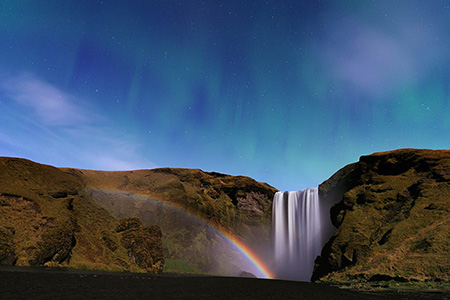 The longer you look at this image, the more you see. Perhaps your eye is first drawn to the picturesque waterfall called Skogarfoss visible on the image right. Just as prevalent, however, in this Icelandic visual extravaganza, is the colorful arc of light on the left.

This chromatic bow is not a rainbow, since the water drops did not originate in rainfall nor are they reflecting light from the Sun. Rather, the drops have drifted off from the waterfall and are now illuminated by the nearly full Moon. High above are the faint green streaks of aurora. The scene, captured one night last month, also shows a beautiful starscape far in the background, including the Big Dipper, part of the constellation of the Great Bear (Ursa Major). 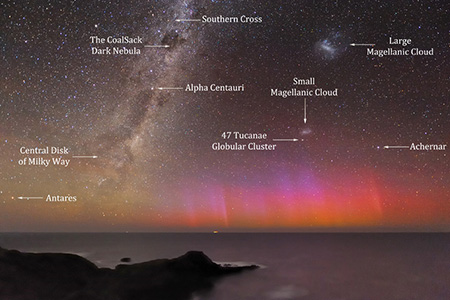 Why would the sky glow red? Aurora. Last week’s solar storms, emanating mostly from active sunspot region 1402, showered particles on the Earth that excited oxygen atoms high in the Earth’s atmosphere. As the excited element’s electrons fell back to their ground state, they emitted a red glow.

Were oxygen atoms lower in Earth’s atmosphere excited, the glow would be predominantly green. Pictured above, this high red aurora is visible just above the horizon last week near Flinders, Victoria, Australia. The sky that night, however, also glowed with more familiar but more distant objects, including the central disk of our Milky Way Galaxy on the left, and the neighboring Large and Small Magellanic Cloud galaxies on the right. A time-lapse video highlighting auroras visible that night puts the picturesque scene in context. Why the sky did not also glow green remains unknown. 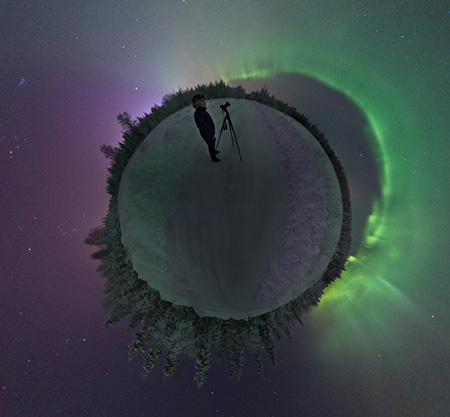 Illuminated by an eerie greenish light, this remarkable little planet is covered with ice and snow and ringed by tall pine trees. Of course, this little planet is actually planet Earth, and the surrounding stars are above the horizon near Ostersund, Sweden.

The pale greenish illumination is from a curtain of shimmering Aurora Borealis also known as the Northern Lights. The display was triggered when a giant solar coronal mass ejection (CME) rocked planet Earth’s magnetosphere on January 24th and produced a strong geomagnetic storm. Northern hemisphere skygazers will also recognize the familiar orientation of stars at the left, including the Pleiades and Hyades star clusters and the stars of Orion. Increasing solar activity has caused recent auroral displays to be wide spread, including Aurora Australis, the Southern Lights, at high southern latitudes. 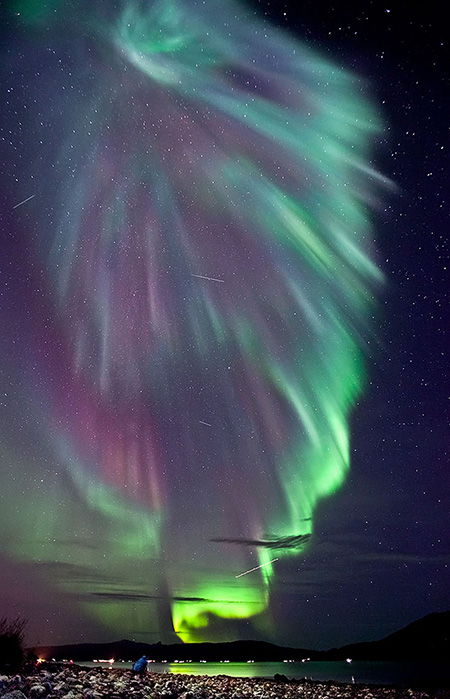 Although auroras might first appear to be moonlit clouds, they only add light to the sky and do not block background stars from view. Called northern lights in the northern hemisphere, auroras are caused by collisions between charged particles from the magnetosphere and air molecules high in the Earth’s atmosphere. If viewed from space, auroras can be seen to glow in X-ray and ultraviolet light as well. Predictable auroras might occur a few days after a powerful magnetic event has been seen on the Sun.

With the Sun being unusually dormant over the past four years, the amount of Sun-induced auroras has been unusually low. More recently, however, our Sun has become increasingly active and exhibiting a greater abundance of sunspots, flares, and coronal mass ejections.

Solar activity like this typically expels charged particles into the Solar System, some of which may trigger Earthly auroras. Two weeks ago, beyond trees and before stars, a solar storm precipitated the above timelapse displays of picturesque auroras above Ravnastua, Skoganvarre and Lakselv, Norway. Curtains of auroral light, typically green, flow, shimmer and dance as energetic particles fall toward the Earth and excite air molecules high up in the Earth’s atmosphere.