Photo credit: Xinhua
Unlike the world’s first maglev train, China’s new hydrogen-electric train has a built-in hydrogen power system that enables it to travel 373-miles on a single charge. This is no bullet train though, as it has a maximum speed of 99.4 mph, which is plenty fast for urban transport. The powertrain consists of a hydrogen fuel cell and supercapacitor, rather than a traditional catenary power supply system.

Energy is generated through the electrochemical reaction of hydrogen and oxygen in the hydrogen fuel cell. The byproduct is simply water without any nitrogen or sulfur, and the reaction process is stable, all the while keeping noise to a minimum. If it ran for 310 miles round trip each day, it would reduce carbon dioxide emissions by over 22,046 pounds annually. Other features include a 5G wireless network, autonomous driving, and automatic return to depot functionality. 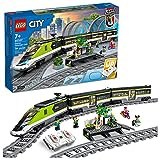 Custom Mercedes-Benz Sprinter Might Have Largest Camper Van Bathroom Yet

Rezvani Vengeance is the Ultimate SUV for the Zombie Apocalypse, Based on Cadillac Escalade