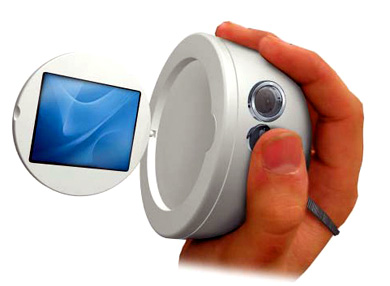 Here are some cool Apple gadgets that never quite made it past the drawing board. But, if one of them were to be produced, it’d have to be the iPod Watch. Which one is your favorite?

Simple yet very stylish, the iBall proves that more is less with a fold-out LCD screen and an ergonomic grip. You won’t find buttons cluttering up the exterior, as all controls appear on its touch-screen display.

The iBall’s design is also functional in that all of the electrical components are protected and hidden behind a hatch, that can be easily opened when needed.

Designed by Peter Burns, this iPod watch concept is envisioned “as a 10GB player with Bluetooth-enabled earphones.”

The clean Apple-esque look of the watch is enhanced by the lack of wiring between player and earphones, and the whole design looks like a sleek, efficient method of dealing with the increasing risk of misplacing the unit as the iPod gets smaller and smaller

The screen can also be set to various levels of translucency, and can fade during sleep modes etc

Sergio Trujillo designed this interesting “iCapOpener” accessory for the iPod Shuffle. It basically slips right onto one end of the player and acts as a bottle opener — great for parties.

We praise him for the time it took to make this movie, but the practicality of the thing leaves something to be desired. Plus, we think the iPod Shuffle is getting replaced by a lower-end iPod Nano come WWDC anyway