We’ve come a long way since the early black and white televisions. Future display technologies include a 2D/3D switchable LCD TV and more. 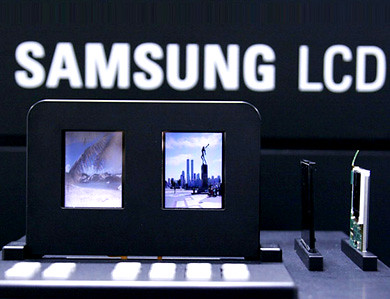 Samsung has developed a dual-sided LCD for mobile devices that makes use of their new “double-gate, thin-film transistor (TFT) architecture.” At just 2.6mm thick, this display boasts QVGA (240 x 320) resolution and 250 nits (front) / 100 nits (back) brightness. 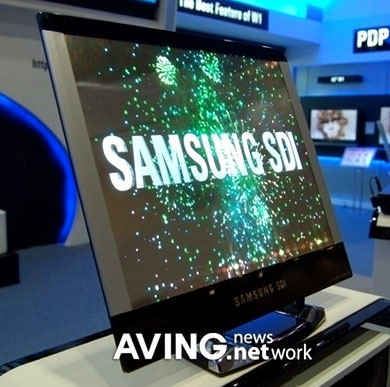 The active matrix / organic light emitting diode hybrid AMOLED technology has been a Samsung favorite, providing bright, colorful displays in quite thin form factors, since there’s no need for a backlight

Here’s a first: a touchscreen display you don’t actually have to touch. Basically, users swipe their hand from a distance of up to 15cm away and the built-in sensors translate that movement into a command — like flipping pages, etc.

Developed by Mitsubishi Electric Research Laboratories (MERL), this interactive multi-input panel allows users to control games or applications with an array of antennas embedded in the touch surface. Basically, a receiver connected to each user’s chair, gets signals from antennas near the touch point. The displays are available in 32-inch and 42-inch sizes.

We’re used to seeing OLED screens in small-ish electronics. But the technology is moving forward by leaps and bounds, and displays getting ever larger. The nice thing about OLED displays is that they don’t have to be quite as thick as their LCD or plasma counterparts

CNN gives us another look at Sharp’s 2-way LCD technology. With a parallax barrier superimposed on a normal TFT-LCD, these displays can show different information simultaneously depending on the viewing angle.

This followup to Toshiba’s flat-bed 3D display, builds upon that technology and adds touchscreen functionality. Put simply, it employs “an integral imaging system that reproduces light beams similar of those produced by a real object, not its visual representation.”

This could quite possibly be the largest multi-touch display we’ve ever seen. In this demonstration, you’ll see the user navigate through Google Earth-like software and organize photos.
DisplaysFeatureTechnologyTop 10Video
0
Prev Post