If you’re a geek who prefers to live in style and luxury, look no furthur than these gadgets. Highlights include the “Open Edition LED Clock”, “Herman Miller LED Leaf Light”, and “Blackbook”. Continue reading to see them all.

That’s right, Lexus built a one-of-a-kind chrome IS250 for the Australian International Motor Show, fitted with a special body kit that consists “of a front lower spoiler, side skirts, rear lower skirt and a boot spoiler.”

The creators were inspired by a chrome Lamborghini owned by rap star 50 Cent and had the Japanese built car re-sprayed in the special MirraChrome paint in the Australian state of Victoria. Our favorite feature has got to be car’s alloy wheels, which were specially prepared for this vehicle, and are available in a polished alloy finish as accessory wheels to all IS250 owners

Another Jaren Goh creation, the BlackBook slightly resembles the Toshiba Quosimo-line of notebooks and features a sleek design.

The indented tiled keypad flows seamlessly into the main body while a TFT screen on the topside replaces a physical logo and allows for graphic customization. The omnipresent gloss factor and chrome-clad edges are impossible to go unnoticed. 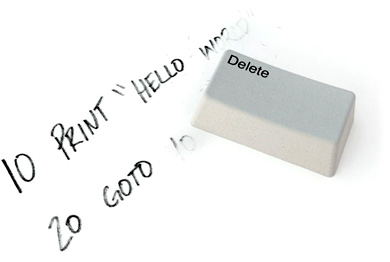 Not all erasers are boring, as Artlebedev — creator of the Optimus Mini Three — proves. Priced at a hefty $10.50, “Delete” will provide “years” of erasing fun…or will it? This product starts shipping in mid-July.

Liven up your workspace with Herman Miller’s LED Leaf Light, which combines a metallic crane body with an energy-saving LED. Simple yet very stylish.

Got a fancy designer desk but only have a crappy Ikea lamp to go on top? Grab this Herman Miller LED Leaf-Light and decorate your office in style

This Open Edition LED Clock consists of four blocks that light up with the correct time when placed in order. It’s available now, priced at $89.00.

However (and don’t quote me on this) I theorize that mixing up the cubes will result in a breach of the space-time contiuum no doubt bringing the end of the universe as we know it. Ditch the Delorean and simply rearrange the blocks to time travel anywhere in that specific day 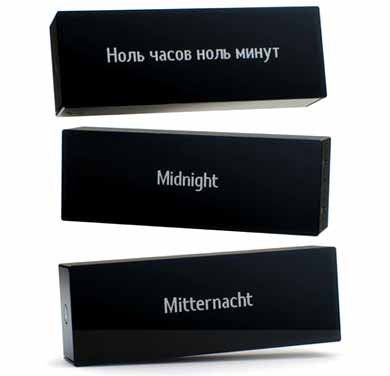 Art Lebedev puts a new twist on electronic clocks, with the Vebarius. This device doesn’t use numbers to display the time, but rather spells it out, and in five different languages to boot. One potential drawback, it’ll set you back a hefty $158.25 (preorder). Product page.

What’s more, it changes up its verbiage each time you ask it the time, displaying variations like “forty-five minutes past four,” “fifteen minutes to five,” “four forty-five”, and “a quarter to five.” This being Lebedev, of course, they’re also taking their time to build up anticipation in the device, with the clock supposedly set to only begin shipping in November

Think of Art.Lebedev’s latest creation, the Upravlator, as a giant monitor-shaped Optimus Mini Three. It’s basically “a 12-button device, with a top-left button that switches context for the rest of the buttons.”

We’ve gotta admit we’re a fan of this color swatch idea pictured above, and we’re guessing there should be plenty more fun uses for the unit once some developers get ahold of the SDK

This Rubik’s Cube Speaker connects to virtually any audio source and boasts LEDs that synchronize to your music. It’s basically a “250-watt speaker and lamp rolled into one.” Best of all, this stylish accessory is priced at just $43.

It doesn’t look to be functional, so you’ll have the frustration of having a puzzle sitting in your living room that can never be solved. I guess you could rearrange the colored bulbs in it to solve it, but that seems as unsatisfying as just moving the stickers around on a real cube

Sleek and stylish, the KE800 is the latest addition to LG’s “Chocolate” lineup. At 9.9mm-thick, it boasts a TFT-LCD display, 256MB of internal memory, 2.0-megapixel camera, an FM tuner, MicroSD card slot, Bluetooth w/A2DP, and a music player.

This new LG’s a cut above previous models, but keeps the same distinctively sexy styling. We fell in love with the original Chocolate’s moody looks, and the new model’s done nothing to sway our affections

The score shown on the left and right sides correspond to the time of day. A continuous random game of Pong is played by the clock every 24 hours 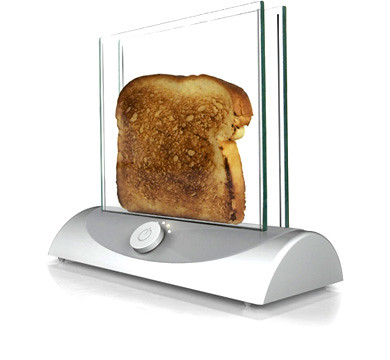 This innovative “Transparent Toaster” concept uses special heating glass to warm a single slice of bread. It looks cool, but unfortunately, the glass doesn’t reach a high enough temperature — at this time — to actually toast the bread. [Source]