H/T: Engadget
What happens when you combine a 3.5″ floppy disk with a VCR? You get this custom floppy disk VCR, called LimaTek Diskmaster. This isn’t just a simple machine that runs basic programs, but rather entire moves in a custom x265 video codec that compresses video to a resolution of 120 x 96 pixels. So far, the entire Shrek movie has been squeezed onto a 1.44 MB floppy, using 1.37 MB of that. Powering this machine is a Raspberry Pi mini computer, which has more than enough processing power for this task. Read more for a video demonstration and additonal information.

I created a floppy disk VCR that plays full length films (like garbage) with the help of a Pi and a custom x265 codec. I call it the LimaTek Diskmaster from r/raspberry_pi 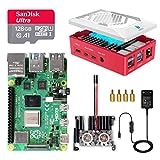