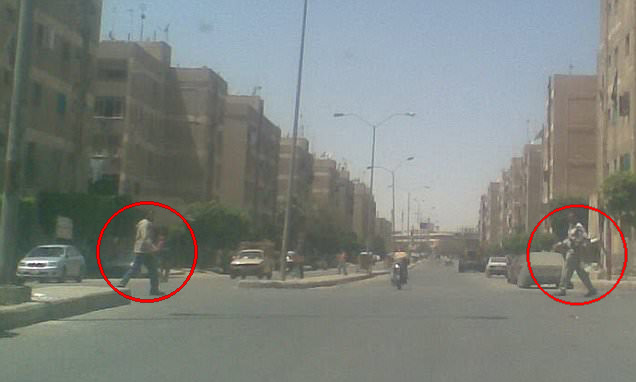 YouTube user “MrMBB333” was using Google Earth to browse the Great Pyramids before stumbling upon an image he claims shows two giants walking around Giza. “That man’s waist is over the top of the car. That guy is eight foot tall and not only is there one there’s two. I think this guy over here is taller than him. Woah. Talk about return of the Annunaki,” said MrMBB333. To view this location yourself, here are the instructions: “Go to ‘6th of October City’, just west of Cairo. Go to Dolci St and find the little coffee cup icon. Click on the icon. Supposed to be a bakery.” Continue reading for a video on the secrets of the Great Pyramids.

“The great Pyramid, one of the seven wonders of the world has three chambers. The so called ‘base’ chamber sits on bedrock while the two upper chambers are called the chambers of the Queen and the King. The network extends from the north and south walls of the Queen’s Chamber into two tunnels , about 20 centimeters wide and high; it is unclear to what purpose these tunnels were made, although it is speculated that they led to a secret chamber,” according to The Ancient Code.

Install it Underground, Climb In, and Groundfridge Becomes Your Own Naturally-Cooled Man Cave