You can always pick up some ferrofluid online, but what if you wanted to make your own? These tutorials show you exactly how, and for some, it is a manageable task, especially if you’re locked down at home. A process for making a ferrofluid was first invented in 1963 by NASA’s Steve Papell, as he set out to create liquid rocket fuel that could be drawn toward a fuel pump in a weightless environment by applying a magnetic field. Read more for two videos and additional information.

The name ferrofluid was eventually introduced and the process improved when more highly magnetic liquids were synthesized. Practical applications include in electronic devices, where it’s used to form liquid seals around the spinning drive shafts in hard disks, loudspeakers to remove heat from the voice coil, and in the future, spacecraft propulsion. That’s right, ferrofluids can be made to self-assemble nanometer scale sharp tips under the influence of a magnetic field, and when that happens, the tips begin emitting jets that could be used as a thruster mechanism to propel small satellites. 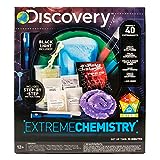