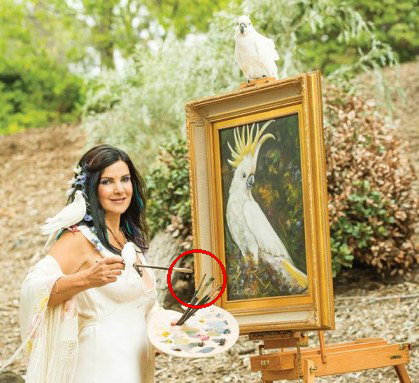 Concetta Antico is a painter unlike any other, and that’s because she’s tetrachromatic. This unique condition enables her to see 100-million colors, rather than just 1-million, like normal humans, thanks to extra receptors in her eyes. Most people have three types of cones, which are structures in the eye that designed to absorb particular wavelengths of light and transmit them to the brain, but tetrachromatics, like Concetta, have four cones. Continue reading for more pictures and informatino.

“Tetrachromats are extremely rare – only a handful have ever been identified. The fourth cone in their eyes are believed to process colors other than red, green, and blue that are visible to us. The condition is thought to be caused by mutations in the X chromosome, which is responsible for people seeing more or less colors. The same mutations make men more likely to be color blind, while women are more likely to be tetrachromats,” says Oddity Central.

Polaroid 72″ ProPod Deluxe Tripod with Carrying Case Gets 69% Reduction to $24.99 Shipped, Today Only

These Latte Images Have Not Been Computer-Generated, Just Masterfully Drawn