No, this isn’t a concept or some joke, but rather an actual phone developed by a group of Japanese scientists, lead by Takashi Minato. They have “come up with a human-shaped mobile phone that has a skin-like outer layer that apparently allows you to feel closer to the person on the other end of the phone.” Continue reading for another picture and more information. 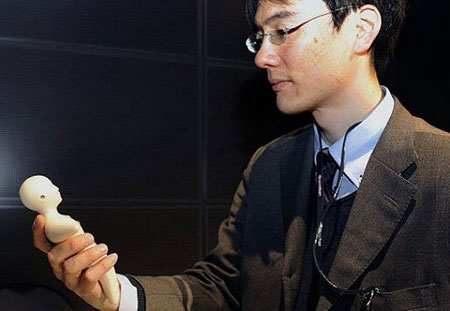 The project is a collaboration between Osaka University, the mobile telephone operator NTT DoCoMo and other institutes. They hope to put it into commercial production within five years by adding image and voice recognition functions. The prototype, slightly bigger than the size of a palm, features an outer coating that feels like human skin, ATR officials said.

Interior of Mars Holds Vast Reservoirs of Water, According to Scientists