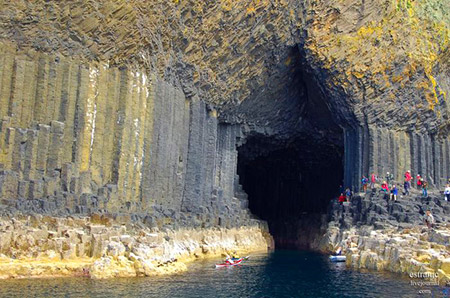 Fingal’s Cave is basically a sea cave that’s located on the uninhabited island of Staffa, in the Inner Hebrides of Scotland. It got its name, “Pillar Island”, from the hexagonally jointed basalt columns within a Paleocene lava flow – cooling on the upper and lower surfaces of the solidified lava resulted in contraction and fracturing, starting in a blocky tetragonal pattern and transitioning to a regular hexagonal fracture pattern with fractures perpendicular to the cooling surfaces. Continue reading for two videos, more pictures, and additional information.

Due to its size and naturally arched roof, waves splashing upon the columns generate eerie sounds and echoes of waves. One thing you may not know is that the cave’s Gaelic name, An Uaimh Bhinn, means “the melodious cave.” It was brought to the attention of the English-speaking world by 18th-century naturalist Sir Joseph Banks in 1772. However, it became known as Fingal’s Cave after the eponymous hero of an epic poem by 18th-century Scots poet-historian James Macpherson.

Fingal’s Cave has a large arched entrance and is filled by the sea. Many local companies offer a pass by the cave in sightseeing cruises from April to September. That’s not all, it’s also possible to land elsewhere on the island and walk to the cave overland, where a row of fractured columns forms a walkway just above high-water level permitting exploration on foot. From the inside, the entrance seems to frame the island of Iona across the water.

I’m Retired: A Funny Short Film That Shows Why Soldiers Shouldn’t Come Out of Retirement