The first Mortal Kombat movie was released in 1995 and the special effects left a lot to be desired. Fast forward to 2021 and a new film is set to be released in theaters as well as HBO Max streaming on April 16th. Today, Warner Brothers released the very first trailer and it follows the story of a washed-up mixed martial arts fighter named Cole Young who is unaware of his hidden lineage or why he is being hunted down by Sub-Zero of the Lin-Kuei clan of assassins. Read more to see both the restricted and unrestricted trailers.

As you can see in the unrestricted trailer below, they did not skimp out on the gore. Whoever you’re rooting for, Cole is out for the safety of his family, so he seeks out a clique of fighters that were chosen to defend Earthrealm in a high-stakes battle against the forces of Outworld. The movie stars Lewis Tan (Cole Young), Jessica McNamee (Sonya Blade), Josh Lawson (Kano), Tadanobu Asano (Raiden), Mehcad Brooks (Major Jackson ‘Jax’ Briggs), Ludi Lin (Liui Kang), Chin Han (Shang Tsung), Joe Taslim (Bi-Han / Sub-Zero), and Hiroyuki Sanada (Hanzo Hasashi / Scorpion). 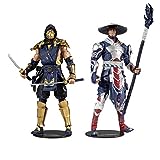 
Get over here! Watch the trailer for Mortal Kombat now — in theaters and streaming exclusively on HBO Max April 16. #MortalKombatMovie pic.twitter.com/eFhQhbdNUl