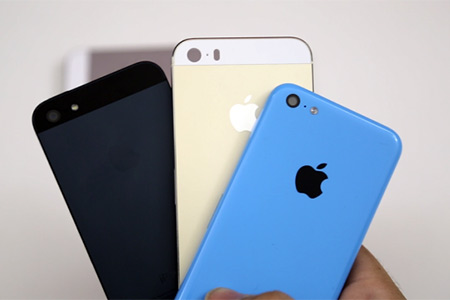 Here it is, a first hands-on look at both the iPhone 5C and gold iPhone 5S, which are set to be officially unveiled on September 10th. According to Mac Rumors, the “iPhone 5S is nearly identical to the iPhone 5 with the exception of the dual-LED rear flash [and] a redesigned home button to incorporate its fingerprint sensor.” Continue reading for the video and more information.

The iPhone 5C is shown in blue, but it will come in an array of colors including blue, green, red, yellow, and white.

Apple is not expected to produce a black iPhone 5C, but all of the 5Cs will feature standard black faceplates with a matching black Apple logo on the back of the device.