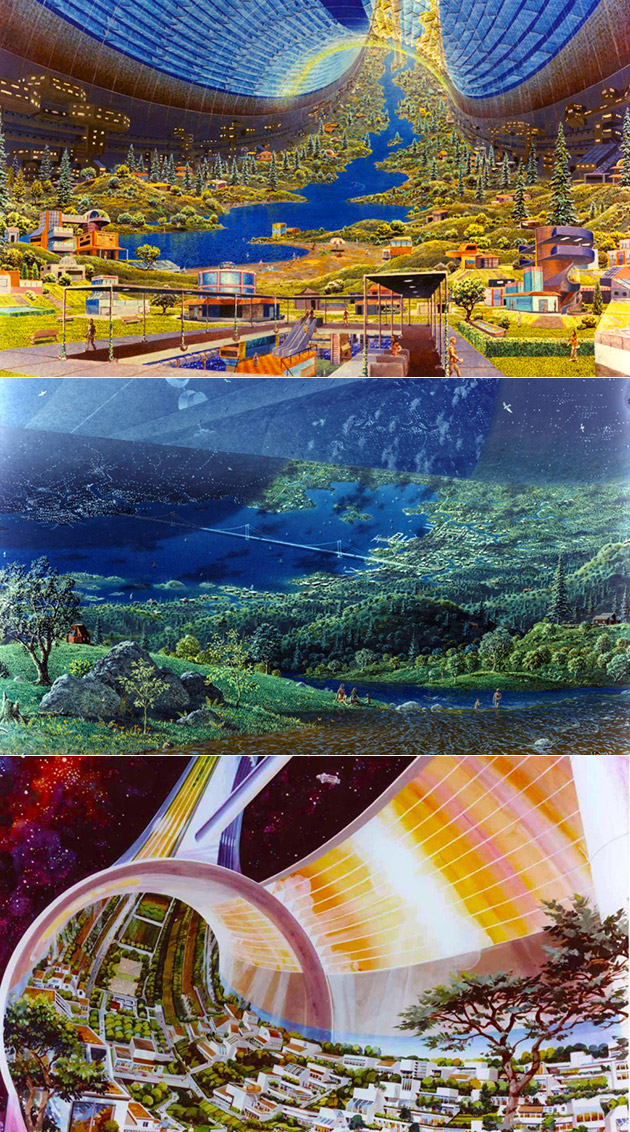 The O’Neill cylinder is essentially a space settlement design proposed by American physicist Gerard K. O’Neill in his 1976 book The High Frontier: Human Colonies in Space. An O’Neill cylinder would consist of two counter-rotating cylinders. The cylinders would rotate in opposite directions in order to cancel out any gyroscopic effects that would otherwise make it difficult to keep them aimed toward the Sun. Each would be 5-miles in diameter and 20-miles long, connected at each end by a rod via a bearing system. They would rotate so as to provide artificial gravity via centrifugal force on their inner surfaces. Continue reading for two more videos, pictures and additional information.

The habitat and its mirrors must be perpetually aimed at the Sun to collect solar energy and light the habitat’s interior. O’Neill and his students carefully worked out a method of continuously turning the colony 360° per orbit without using rockets. First, the pair of habitats can be rolled by operating the cylinders as momentum wheels. If one habitat’s rotation is slightly off, the two cylinders will rotate about each other. Once the plane formed by the two axes of rotation is perpendicular in the roll axis to the orbit, then the pair of cylinders can be yawed to aim at the Sun by exerting a force between the two sunward bearings. Pushing the cylinders away from each other will cause both cylinders to gyroscopically precess, and the system will yaw in one direction, while pushing them towards each other will cause yaw in the other direction. The counter-rotating habitats have no net gyroscopic effect, and so this slight precession can continue throughout the habitat’s orbit, keeping it aimed at the Sun.

Pepsi P1 Smartphone is Not a Joke, Here’s a First Look, Octa-Core CPU and All