Phoo Chan, a California-based amateur photographer, managed to capture a once-in-a-lifetime image of a crow riding on a bald eagle’s back using a Canon 1D X, Canon 600mm II lens, and a Canon 1.4x III extender. Chan said: “Crows are known for aggressively harassing other raptors that are much bigger in size when spotted in their territories and usually these ‘intruders’ simply retreat without much fuss. However, in this frame the crow did not seem to harass the bald eagle at such close proximity and neither did the bald eagle seem to mind the crow’s presence invading its personal space.” Continue reading to see the sequence of events captured during this photographer’s burst shoot. 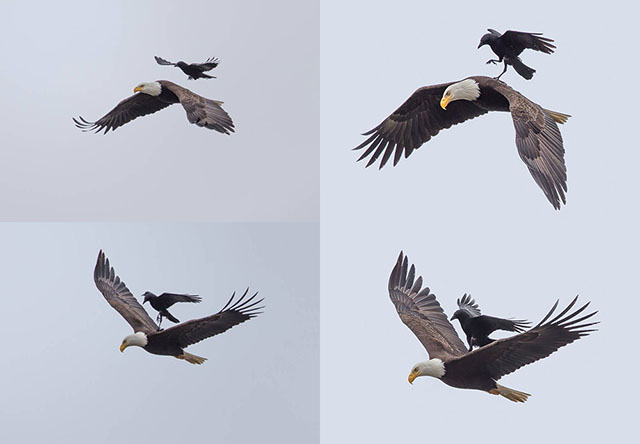 Chan added: “The eagle didn’t seem to mind and kept flying as if nothing happened,” he said. “I think the crow decided to land on the eagle because the eagle did not respond to its harassment, so it landed briefly and then left. The ride lasted just seconds. Eventually the crow flew away and the eagle continued to hunt for its breakfast.”