Logan, better known as Wolverine, is a mutant who possesses animal-keen senses, enhanced physical capabilities and a healing factor that allows him to recover from virtually any wound at an accelerated rate. Ricardo Fuentes of Mexico City proved why he is the superhero’s real-life counterpart after an explosion occurred at Pemex oil headquarters. Continue reading for one more picture and additional information. 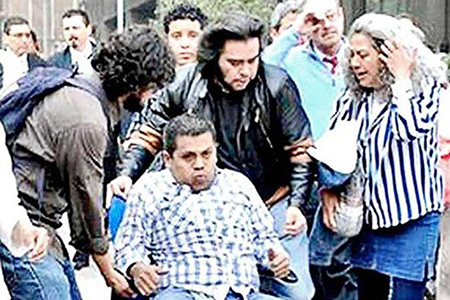 Here’s what Ricardo has to say: “Just when I was helping these people I was photographed. Resembling the character was no coincidence, as a teenager I liked the character from the comics. All my friends call me Logan, since I was in high school, this up here (his hair) I comb my hair back and leave alone, then I laugh at these situations in the office because I said that it seems I have horns head and I reply that my hair well so they do not see me.”

However, Ricardo believes that comparisons are unnecessary when a coincidence put several factors at a site. He adds: “It’s not because I’ve got to find fame, then demanded it, was what was needed and the guy who took the picture could be or could not be and the same would have gone unnoticed, was a series of coincidences which are giving.”