Researchers have just discovered an alien planet that might be able to harbour life, located just 16 light years away. Named Gliese 832c, it’s a ‘super-Earth’ at least five times as large as our planet. They believe it has Earth-like temperatures, albeit with large seasonal shifts. Astronomers from around the world claim that the exoplanet is in the star Gliese 832’s ‘habitable zone,’ the perfect range distances that could allow liquid water to exist on a world’s surface. Continue reading for a picture showing how big it is compared to Earth and for more information. 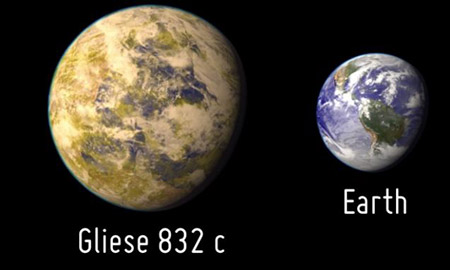 Gliese 832c orbits its host star, a red dwarf that’s cooler than our sun, every 36 days. Despite this fact, it receives about as much stellar energy as Earth does even though it’s much closer to its parent.’This makes Gliese 832 c one of the top three most Earth-like planets and the closest one to Earth of all three, a prime object for follow-up observations,’ said Abel Mendez Torres, director of the Planetary Habitability Laboratory at the University of Puerto Rico at Arecibo.