Though not connected to these UFO mysteries, this discovery is puzzling nonetheless. According to Beforeitsnews, “the body of a perfectly preserved, carefully mummified an alien was found buried in an ancient pyramid. A mysterious creature from between 150 and 160 centimeters was found by an archaeologist near Lahun when exploring a small pyramid near the Dynasty doceaba of Senusret II.” Continue reading for one more picture, a bonus video, and additional information. 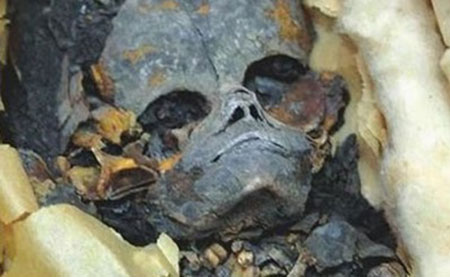 According to Egyptian sources, the alien mummy was discovered by Dr. Viktor Lubek, Czechoslovakian citizen and retired professor of the University of Pennsylvania. Archaeologist located the hidden compartment while conducting an investigation into a small pyramid south of the main pyramid, Senusret II, which contains the queen of the pharaoh. At the site also found some gold and clay mixtures covering the body, and traces of cloth linen like appearance, the skin covering the enigmatic being.

“The truth is, that every expert who has seen the mummy have concluded that it is not of earthly origin,” said the source. “There is a sense that this is an alien who somehow ended up advising an Egyptian king.” But everyone in the government is moving away from that conclusion that would support the new ideas that the ancient Egyptians had help from aliens in building their extraordinary civilization. “The Egyptians refuse to believe that their heritage came from outer space.”

5 of the World’s Coolest Caves