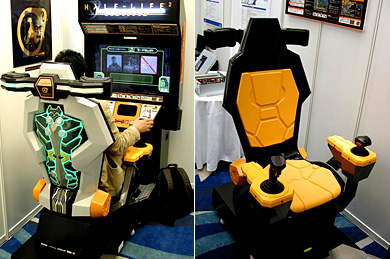 If you like the idea of playing Pong with a flashlight, rather than a controller, check out our list of strange games you (probably) never knew existed. Which one is your favorite?

Inspired by the original Whack-a-Mole, DDR-a-Mole makes use of a MPC823 microcontroller to put a creative twist on the game.

The difference with our version is that the player would not be using a mallet, but rather a Dance Dance Revolution (DDR) pad. The pad, which is a playstation controller, has eight steppable buttons, and the game is played by pressing on a button to “whack” a corresponding mole when it pops up.

TileToy is “a modular, electronic game prototype for tangible LED game tiles” — consisting of four 2-inch squares, each with an LED matrix system.

Each tile is controlled individually and can be used to transmit information on its own or in groups of several tiles. The assembled tiles transmit wirelessly their individual position in relation to each other and based on that changing information, a central computer, or a dedicated tile runs the different applications.

“Bomberman Evolved” basically involves “setting up a ceiling camera to track movements from above — gamers play wearing colored beanie hats so the camera can track their movements for the characters on the projector screen at the from of the room.”

With all the tables pushed aside, the two gamers run around the room and the characters follow their paths in the game. It looks like they have controllers for dropping bombs too, can you imagine the level of exertion this would take to play for some games?

Created by the MIT Media Lab, You’re In Control is a urine-control system where “sensors in the back of a urinal detect the position of impact of a stream of urine, enabling the user to play interactive games on a screen mounted above the urinal”.

Players control their movement by a combination of joysticks – one for each hand – and floor pedals. The console unit’s screen is a HDTV widescreen liquid crystal display – the action unfolding from a traditional first-person shooter perspective

Display22 puts a new twist on the classic game of Pong by adding a new level of interactivity — using flashlights to control the paddles. The entire surface of the screen was fitted with light-tracking sensors to follow movement.

Concretely, Flashlight Pong should be playable in the input area on the display installed