Why go to a real movie theater, when you’ve got the money to build your very own cinema at home that looks better than the real thing? These cool examples include home theater setups inspired by Stargate Atlantis, Star Wars, and more. Continue reading to see all ten.

Jason Crist wanted to bring some Paris back to his home in Nashville, so he hired designer Donny Hackett to build an incredible Paris-themed home theater. It comes complete with a “ceiling structure [that] was modeled after a rose window of the Notre Dame cathedral.” 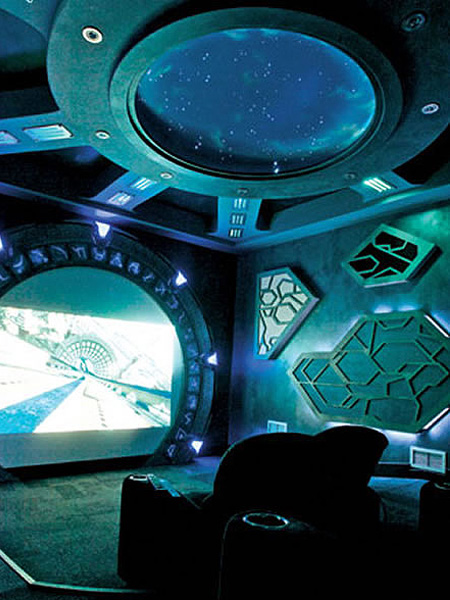 his Stargate Atlantis home theater could be the other of all home theaters, completed at a cost of $70,000. Featuring “a 10 foot diagonal circuit screen (that shows a 96-inch diagonal image), Atlantic’s THX series speakers, a couple of Polk Audio IW155 in-wall subwoofers and a JVC RS-1 D-ILA light amplifier for HD imagery.” 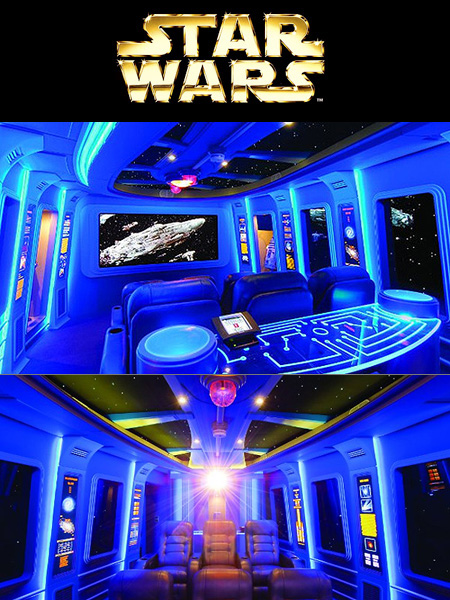 This could quite possibly be the coolest and most detailed Star Wars-inspired home theater ever. Featuring “10,000 square feet of contemporary design; six flat panel HDTVs each with their own futuristic touchscreen remote from Creston.”

4. Pirates of the Caribbean Home Theater 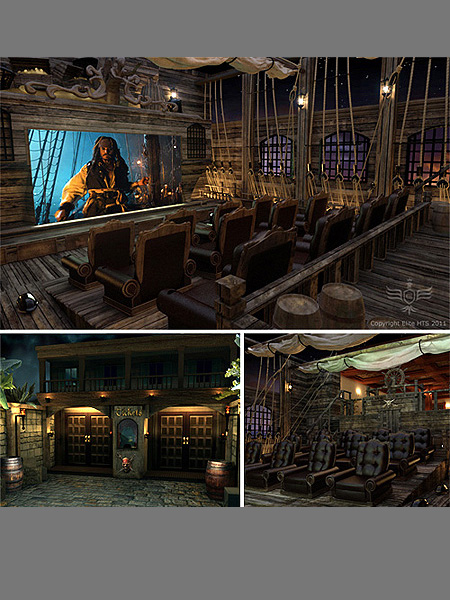 Built at a cost of $2.5-million, this Pirates of Caribbean-inspired home theater definitely looks the part. Unfortunately, you won’t find any lifelike animatronics in the theater. However, expect to feel like you’re riding the actual theme park attraction when stepping into this mind-blowing room. 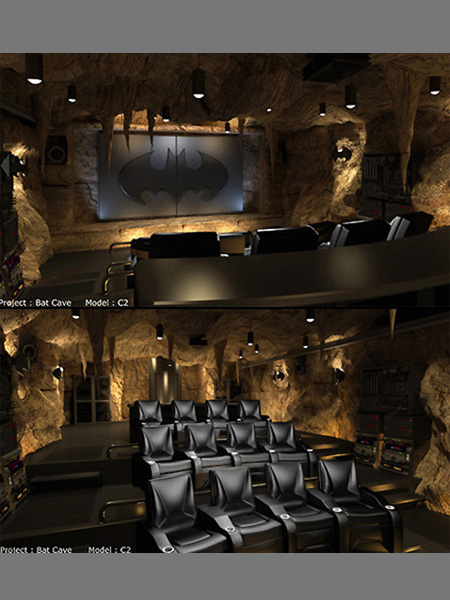 Built by Elite HTS, the Bat Cave looks just as it sounds, the underground fortress where Batman goes to rest, train, etc. Fortunately, this home theater is open to the public and used to screen some of Hollywood’s latest blockbusters, even before they hit the box office. 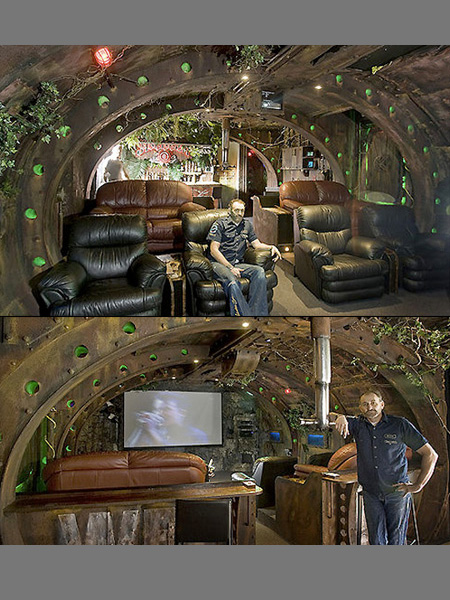 Though nothing can beat the experience of actually diving thousands of feet into an ocean, this amazing submarine home theater might be a close second. Built at a cost of $100,000, this setup even includes a periscope along with rusty metal arches / walls. 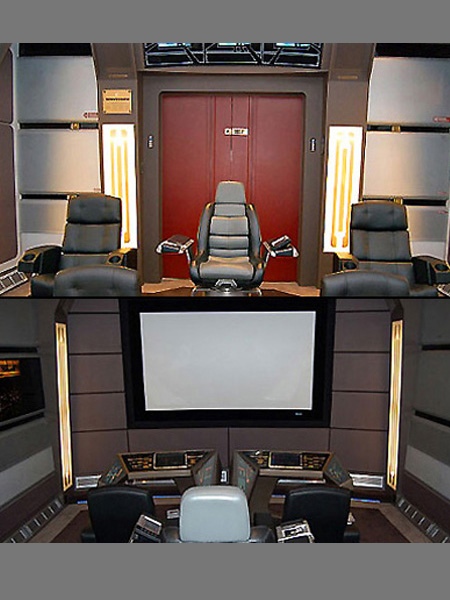 Aside from using original props — including two original consoles, this Star Trek home theater setup Gary Sekulow looks like a real movie set. That’s not all, Sekulow even “has the captain’s chair from ‘Star Trek: Enterprise’ seasons 1 through 3.” 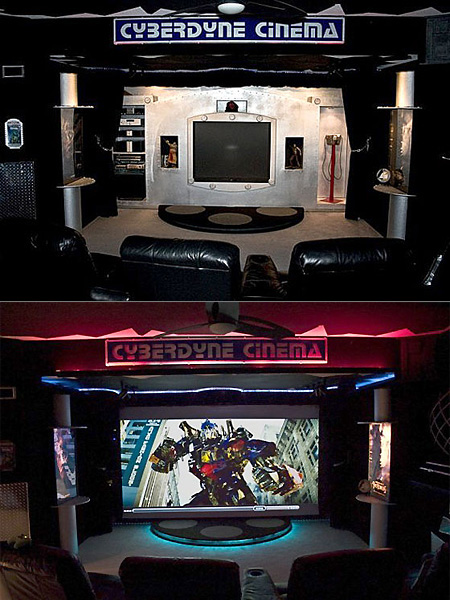 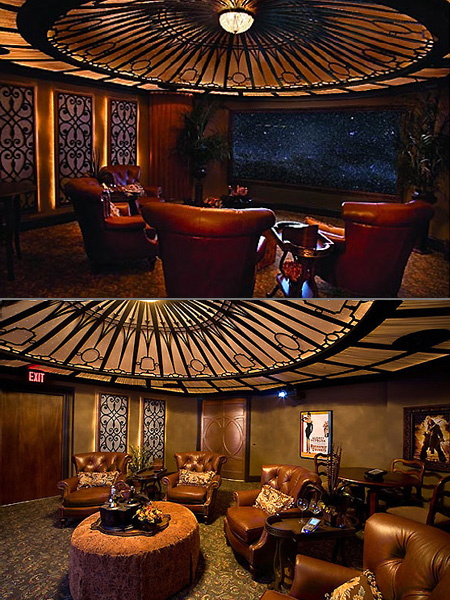 This Titanic-inspired home theater features “1,230 fiber optic light strands in order to provide the artificial night sky and entry to the luxurious bar next door can be found behind a motorised bookcase.” This truly brings the movie theater experience home. 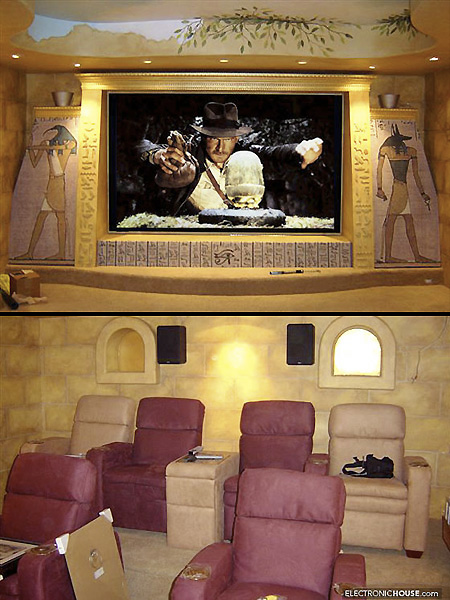 One step inside this 18-by-12-foot, Indian Jones-inspired home theater setup, and “it’s like entering a cave with the top worn out to expose the sky; next to the door, there is a small equipment room, which also includes wiring for intercom, security, networking and sound.”

Scumbag Steve Meme: The Best Of