There are many ways of using your computer – in a coffee shop, at school, in your room, etc. However, using your MacBook Air to cut vegetables, fruits and / or poultry is a completely different story. We’ve rounded up ten of the most bizarre ways to use a computer for your viewing enjoyment. Continue reading to see them all. 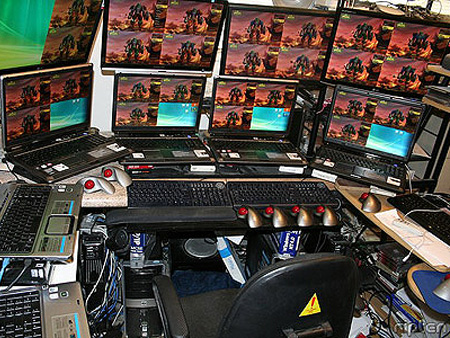 You may be asking yourself, why does this person have so many monitors all running World of Warcraft? Well, Bradster (owner) picked up “36 copies of Wrath of the Lich King on day one, spending around $1500, just so he can have a raid group of level 80 Shamans terrorizing Stormwind as soon as possible.” 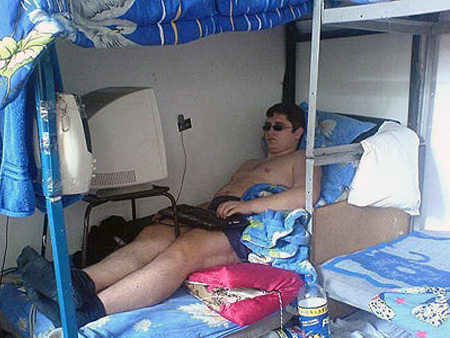 Why spend a day at the beach, when you can spend a day under your bunk, complete with a broadband internet connection, Pepsi, bed-mounted speakers, and beach towels for added effect. From the looks of it, showers don’t seem to be on the “to-do” list, so wet naps, hand sanitizer, and clean clothes are definitely going to be necessary for a weekend computing marathon. 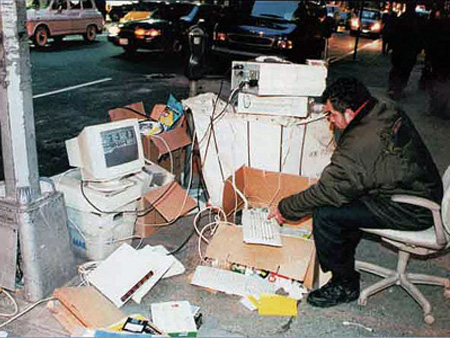 Always wanted a corner office, but never got that promotion? Here’s another type of corner office of another kind. Featuring lots of boxes, old computer parts, a bunch of floppy disks, and a whole mess of wires. We do think that the next upgrade should definitely be an LED monitor, should energy efficiency be a priority.

7. Practicing for a Real Computer

To practice for the arrival of a real computer, just find any old television set, typewriter, and clothes iron. Next, place them on a desk, assume the head lunged forward position, and you’re ready to browse the internet. We wouldn’t be surprised if the next mod is stuffing an actual working computer inside those vintage devices… 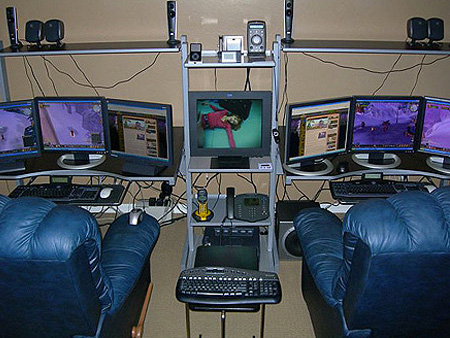 Playing World of Warcraft for days on end can be tiring, for your eyes that is, and what better way to enjoy the other activities life has to offer than with this computer setup. It comes complete with two recliners and a miniature television to boot. One caveat: the recliners do not have built in toilets. 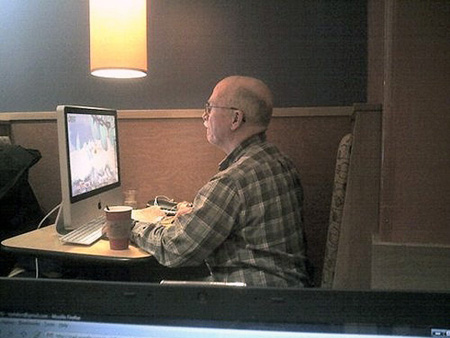 Panera Bread is known for the soups, sandwiches, pastries, and apparently, their free Wi-Fi. This man wanted to take full advantage of the latter, and so he brought his full-sized 21.5-inch iMac into the store. Even more surprising, the person who took this picture claims that he was using it to play World of Warcraft. 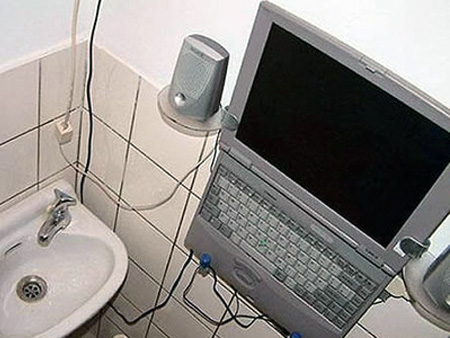 For those who do not care for the safety of their computer equipment, here’s one way to ensure that you’ll be able to surf the internet, brush your teeth, and possibly even use the toilet simultaneously. On the other hand, playing some of your favorite tunes while showering doesn’t sound so bad either. 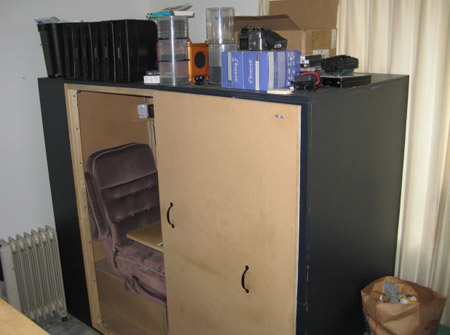 Hard-core gamers that don’t want to be bothered whatsoever (and don’t mind risking suffocation) can lock themselves in this makeshift cabinet computer setup. Unfortunately, World of Warcraft freakouts can still be heard throughout the house, should your shouting be loud enough.

Believe it or not, the then 24-year-old Hermione Way (as of 2010) from the UK has unofficially wed her laptop, which she named “Alex”. One caveat: “Current law does not allow computer to human marriages but Hermione is hoping to change all that.”

We all know that the MacBook Air has edges that are quite sharp, but these users show just how they can be used. Whether it be apples, shrimp, or mushrooms, there’s a MacBook Air for the job.