The Milky Way name comes from its appearance as a dim “milky” glowing band arching across the night sky, in which the naked eye cannot distinguish individual stars. The fact that this faint band of light is made up of stars was proven in 1610 when Galileo Galilei used his telescope to resolve it into individual stars. In the 1920s, observations by astronomer Edwin Hubble showed that the Milky Way is just one of many galaxies. Continue reading to see more.

5. Perseid Meteors and the Milky Way 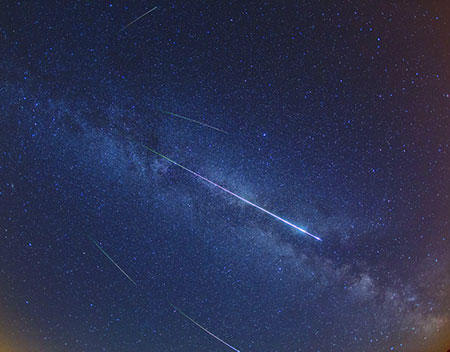 Where will the next Perseid meteor appear? Sky enthusiasts who trekked outside for the Perseid meteor shower that peaked over the past few days typically had this question on their mind. Six meteors from this past weekend are visible in the above stacked image composite, including one bright fireball streaking along the band of the background Milky Way Galaxy.

All Perseid meteors appear to come from the shower radiant in the constellation of Perseus. Early reports about this year’s Perseids indicate that as many as 100 meteors per hour were visible from some dark locations during the peak. The above digital mosaic was taken near Weikersheim, Germany. 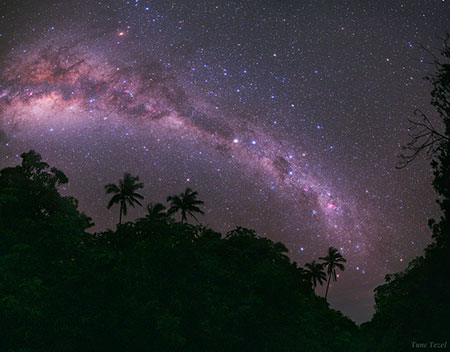 From Sagittarius to Carina, the Milky Way Galaxy shines in this dark night sky above planet Earth’s lush island paradise of Mangaia.

Familiar to denizens of the southern hemisphere, the gorgeous skyscape includes the bulging galactic center at the upper left and bright stars Alpha and Beta Centauri just right of center. About 10 kilometers wide, volcanic Mangaia is the southernmost of the Cook Islands. Geologists estimate that at 18 million years old it is the oldest island in the Pacific Ocean. Of course, the Milky Way is somewhat older, with the galaxy’s oldest stars estimated to be over 13 billion years old. 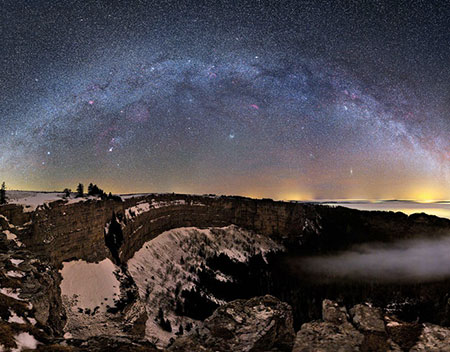 What’s visible in the night sky during this time of year? To help illustrate the answer, a beautiful land, cloud, and skyscape was captured earlier this month over Neuchatel, Switzerland. Visible in the foreground were the snow covered cliffs of the amphitheater shaped Creux du Van, as well as distant trees, and town-lit clouds. Visible in the night sky (at midnight) were galaxies including the long arch of the central band of our Milky Way Galaxy, the Andromeda galaxy (M31), and the Triangulum galaxy (M33).

2. The Milky Way Over Pulpit Rock 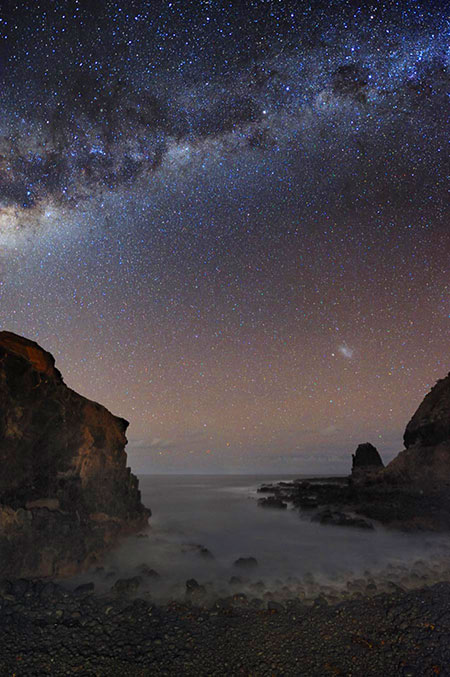 Can a picture of the sky be relaxing? A candidate for such a picture might be this image taken only last month from Cape Schank, Victoria, Australia. The frame is highlighted by a dreamlike lagoon, two galaxies, and tens of thousands of stars. The rock cropping on the left may appear from this angle like a human head, but the more famous rock structure is on the far right and known as Pulpit Rock. Across the top of the image runs a distant stream of bright stars and dark dust that is part of the disk of our spiral Milky Way Galaxy.

1. ISS and the Summer Milky Way 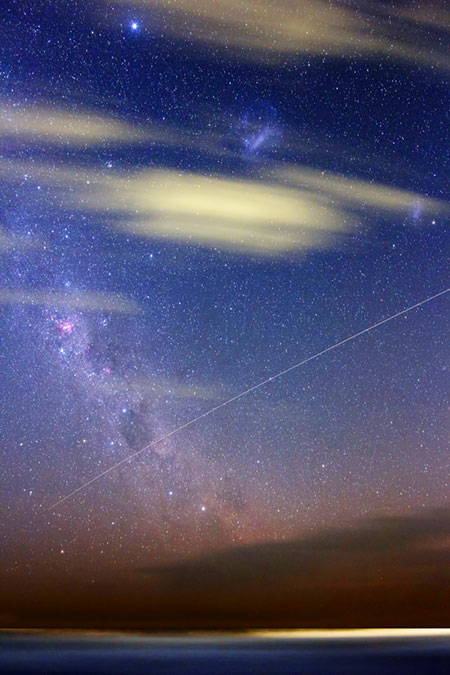 Clouds on a summer night frame this sea and skyscape, recorded earlier this month near Buenos Aires, Argentina. But planet Earth’s clouds are not the only clouds on the scene. Starry clouds and nebulae along the southern hemisphere’s summer Milky Way arc above the horizon, including the dark Coal Sack near the Southern Cross and the tantalizing pinkish glow of the Carina Nebula.

Both the Large (top center) and Small Magellanic Clouds are also in view, small galaxies in their own right and satellites of the Milky Way up to 200,000 light-years distant. Alpha star of the Carina constellation and second brightest star in Earth’s night, Canopus shines above about 300 light-years away. Still glinting in sunlight at an altitude of 400 kilometers, the orbiting International Space Station traces a long streak through the single, 5 minute, star-tracking exposure.

The Milky Way is a barred spiral galaxy 100,000-120,000 light-years in diameter containing 200-400 billion stars. It may contain at least as many planets. The Solar System is located within the disk, around two thirds of the way out from the Galactic Center, on the inner edge of a spiral-shaped concentration of gas and dust called the Orion Arm. The stars in the inner ≈10,000 light-years are organized in a bulge and one or more bars. The very center is marked by an intense radio source named Sagittarius A* which is likely to be a supermassive black hole.

Stars and gas throughout the Galaxy rotate about the center at approximately the same speed, which contradicts the laws of Keplerian dynamics. This indicates that much of the mass of the Milky Way, known as dark matter, does not emit or absorb electromagnetic radiation. The rotational period is about 200 million years at the position of the Sun. The Galaxy as a whole is moving at a velocity of 552 to 630 km per second, depending on the relative frame of reference. It is estimated to be about 13.2 billion years old, nearly as old as the Universe. Surrounded by several smaller satellite galaxies, the Milky Way is part of the Local Group of galaxies, which forms a subcomponent of the Virgo Supercluster.