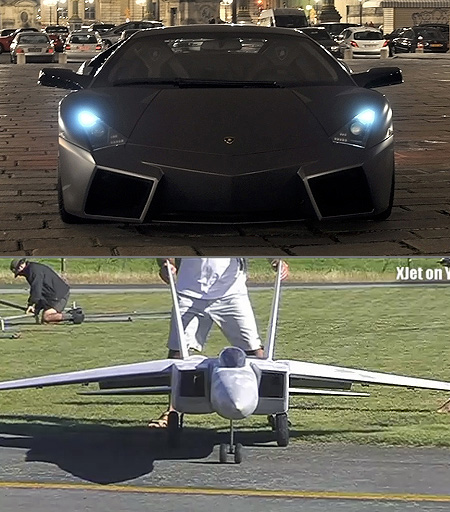 Just because it’s not the real thing, doesn’t mean that the remote-controlled counterparts of real objects have to be treated as toys. We’ve rounded up five of the coolest R/C gadgets for your viewing enjoyment, and yes, it includes the Lamborghini Reventon you see above. Continue reading for more.

There is no better way to kick off this list than with the world’s largest remote-controlled Mig 25 jet. At 4.2-meters long and weighing in at a hefty 42kg, this gigantic huge model was skillfully test-flown by 18-year-old Clinton on the first day of the 2011 ANZAC jet rally in Tokoroa New Zealand.

Here’s a first: a remote-controlled Starship Enterprise submarine that “can zip around underwater without flooding the bridge or shorting out its nacelles.” Unfortunately, there is no word yet on pricing or availability.

Not just any remote-controlled toys, the owner of this amazing F16 jet installed a micro-camera in the cockpit and recorded a flight for all to see. That’s right, “by using a live feed from the camera, the pilot effectively gets the same view out of the cockpit that an actual pilot would enjoy.”

It’s a bird…It’s a plane..It’s RcSuperhero? Sure, you’ll have to build it yourself after spending $295 on a pre-cut kit, but this remote-controlled superhero is designed to take to the skies, and fool just about any bystander.

Limited to just 65-units worldwide, De Agostini’s 1:10 scale, remote-controlled Lamborghini Reventon boasts “a two-stroke 3cc combustion engine and, like the life-size version, gets power to all four wheels.” Other performance features include a two-speed transmission, independent suspension, hydraulic shocks and single-disc brakes. Buyers will control it with a two-channel radio.