When people think of Star Wars, a lightsaber battle usually comes to mind. The weapon is so iconic that fans and big companies (toy, electronics, etc.) alike have created their own versions of it. We’ve rounded up five of the coolest examples for your viewing enjoyment after the break. 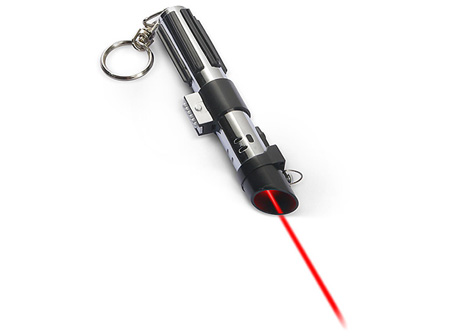 With the majority of flashlights relying on the same tubular design, it takes a certain amount of geekery and attention to detail to stand out. This Darth Vader Lightsaber Flashlight does just that by outfitting it with four LED bulbs and authentic sound effects. That’s right, “you can buy the Darth Vader lightsaber flashlight at the Star Wars shop for only $25 (USD) — 3 AAA batteries included…because, you know, we can’t control the Force. 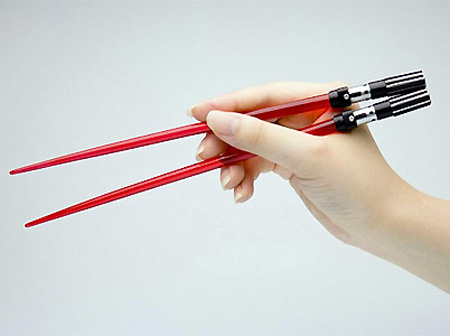 For less than $15, Japan-based Kotobukiya brings The Force to your meals. These lightsaber-inspired chopsticks “are perfect for picking up dumplings, noodles or barbecued Ewok.” Yes, “a long time ago, in a galaxy far, far away, lightsabers were used to eat Asian delicacies. No, not really. But now you can.”

The Force is strong with Cornobi, an innovative corn cob holder that’s designed to resemble a lightsaber from Star Wars. This gadget was created by Shed Simove, “a self proclaimed ‘Ideas Man,’ a serial entrepreneur who’s garnered the prestige of several awards and accolades in response to his work.”

Ok, so technically this lightsaber isn’t exactly functional, but it’s still the largest nonetheless. That’s right, “to celebrate the release of the Star Wars Saga on Blu-Ray, last week BT Tower in London was turned into the largest lightsaber ever constructed.”

Bradley Lewis of Sloth Furnace may have created the world’s coolest homemade lightsaber. In other words, “the blade is ridiculously bright and lights up in an instant, the handle is gorgeous and beautifully constructed.”