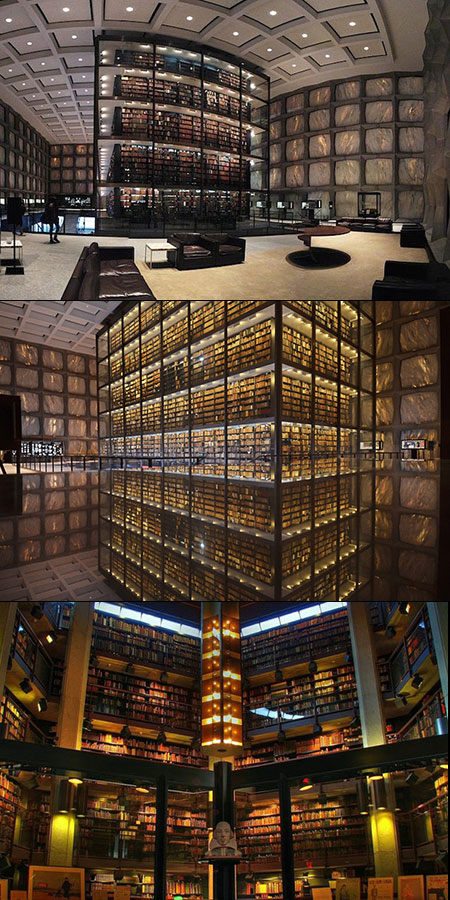 The Beinecke Rare Book and Manuscript Library (BRBL) above is a library and literary archive located on the campus of Yale University. It was a 1963 gift of the Beinecke family and designed by Pritzker Prize-winning architect Gordon Bunshaft. This library is currently the largest building in the world reserved exclusively for the preservation of rare books and manuscripts. A six-story above-ground glass-enclosed tower of book stacks is surrounded by a windowless rectangular outer shell, supported only on four massive piers at the corners of the building, which descend 50 feet to bedrock. The outer walls are made of translucent veined marble panels quarried from Danby, Vermont, which transmit subdued lighting and provide protection from direct sunlight. At night, the stone panels transmit light from the interior, giving the exterior of the building an amber glow. Continue reading for more. 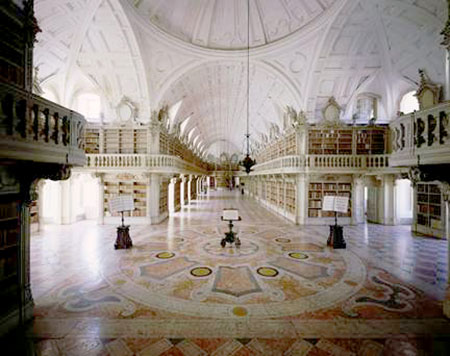 The Rococo library, situated at the back of the second floor, is truly the highlight of this palace, rivaling the grandeur of the library of the Melk Abbey in Austria. Built by Manuel Caetano de Sousa, this library is 88 m long, 9.5 m wide and 13 m high. The magnificent floor is covered with tiles of rose, grey and white marble. The wooden bookshelves in Rococo style are situated on the sidewalls in two rows, separated by a balcony with a wooden railing. They contain over 35,000 leather-bound volumes, attesting of the extent of western knowledge from the 14th to the 19th century. Among them, are many valuable bibliographical jewels, such as incunabula. These beautiful finished volumes were bound in the local workshop (Livraria) in the rocaille style (also by Manuel Caetano de Sousa). 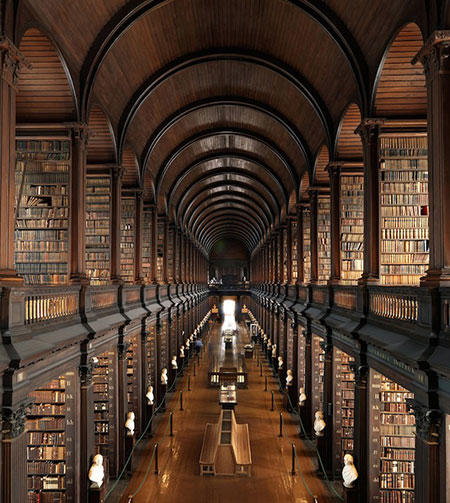 The 65-metre-long (213 ft) main chamber of the Old Library, the Long Room, was built between 1712 and 1732 and houses 200,000 of the Library’s oldest books. The Long Room is measured at almost 65 metres long. After it was first built The Long Room had a flat ceiling, shelving for books only on the lower level, and an open gallery. By the 1850s the room needed to be expanded as the shelves were filled due to the fact that the Library had been given permission to obtain a free copy of every book that had been published in Ireland and Britain. In 1860, The Long Room’s roof was raised to accommodate an upper gallery 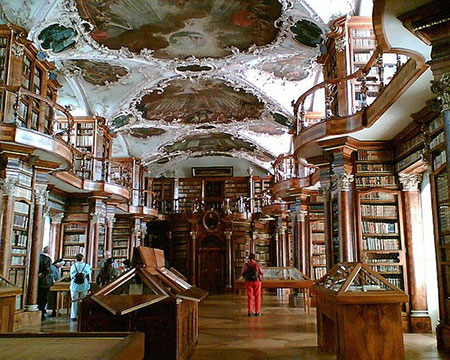 The Abbey Library of Saint Gall was founded by Saint Othmar, the founder of the Abbey of St. Gall. The library collection is the oldest in Switzerland, and is one of earliest and most important monastic libraries in the world. It holds 2,100 manuscripts dating back to the 8th through the 15th centuries, 1,650 incunabula (printed before 1500), and old printed books. The library holds almost 160,000 volumes. The manuscript B of the Nibelungenlied is kept here. The library books are available for public use, but the books printed before 1900 must be read in the Reading Room. 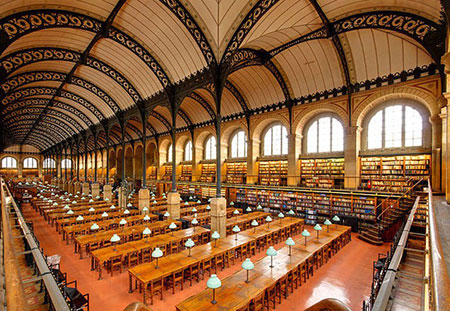 The Sainte-Genevieve Library inherited the writings and collections of one of the largest and oldest abbeys in Paris. Founded in the sixth century by Clovis I and subject to the rule of St Benedict, the abbey was initially dedicated to the apostles Peter and Paul. In 512 the body of St Genevieve, later the patron saint of Paris was buried there and in time became the new dedication. Between 1838 and 1850, the current Sainte-Genevieve Library was designed and constructed under the direction of the architect Henri Labrouste. The glass and iron reading room has been described as “magisterial”, making the building a seminal work in the creation of the modern library as “a temple of knowledge and space for contemplation”. The names of 810 illustrious scholars are inscribed on the library facade. 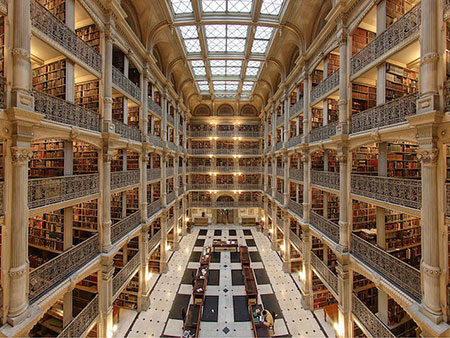 The George Peabody Library, formerly known as the Library of the Peabody Institute, is the 19th century research library of The Johns Hopkins University. It is located on the Peabody campus at Mount Vernon Place in Baltimore, Maryland. he main collection reflects scholarly interests and fads of the 19th century. The library’s 300,000 volume collection is particularly strong in religion, British art, architecture, topography and history; American history, biography, and literature; Romance languages and literature; history of science; and geography, exploration and travel.While the majority of titles date to the 19th century, the library also has a strong assortment of early printed books, cuneiform tablets, and a marquee collection of Don Quixote editions.