Photo credit: Tim O’Hara
Australian researchers have discovered the remnants of an ancient submarine volcano in the Indian Ocean that looks oddly similar to the “Eye of Sauron” from J.R.R. Tolkien’s “The Lord of the Rings” trilogy. It was detected using a multi-beam sonar at a depth of 3,100 meters (10,170 feet) beneath Australia’s Commonwealth Scientific and Industrial Research Organization’s (CSIRO) ocean research vessel RV Investigator approximately 280 kilometers (174 miles) southeast of Christmas Island. 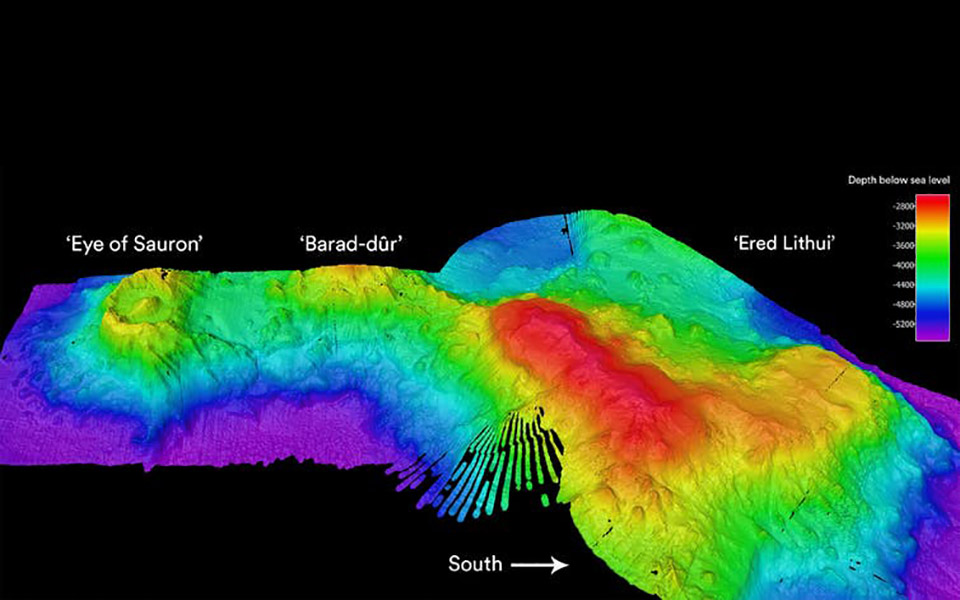 Photo credit: Phil Vandenbossche | Nelson Kuna/CSIRO
Aside from this underwater volcano, the three-dimensional mapping also revealed two other seafloor structures, both with Tolkein-inspired names, called Barad-dûr and Ered Lithui. These structures are both located near the Eye of Sauron in Mordor. All three of these appear to be a part of a cluster of seamounts that have been previously estimated to be more than 100 million years old, which had formed next to an ancient sea ridge when Australia was located more near Antarctica than Asia.


Previously unknown and unimagined, this volcano emerged from our screens as a giant oval-shaped depression called a caldera, 6.2 kilometers by 4.8 kilometers across. It is surrounded by a 300 [meter]-high rim (resembling Sauron’s eyelids), and has a 300 [meter] high cone-shaped peak at its…[center](the “pupil”),” said Tim O’Hara, chief scientist and senior curator at Museums Victoria.