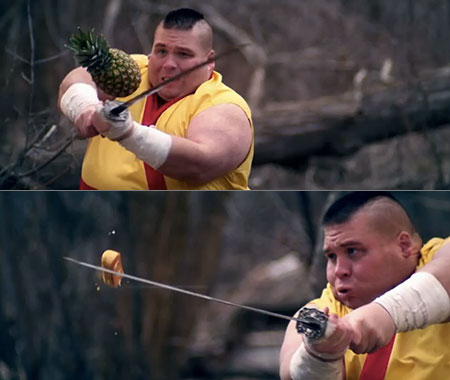 For those who aren’t big smartphone gaming fans, Fruit Ninja is a video game developed by Halfbrick Studios in Brisbane, Australia. As of May 2012, Fruit Ninja reached 300 million downloads, and was on one third of all US iPhones. Continue reading to see what the game would be like in the real world.

This game basically has players slicing fruit with a blade controlled via a touch pad. As the fruit is thrown onto the screen, the player swipes their finger across the screen to create a slicing motion, attempting to slice the fruit in half. Extra points are awarded for slicing multiple fruits with one swipe, and players can use additional fingers to make multiple slices simultaneously. Players must slice all fruit; if three fruits are missed, the game ends, but upon reaching scores that are multiples of one hundred (i.e. 100, 200, 300, etc.), the player will gain an extra life (unless they have not missed a piece of fruit already). Bombs are occasionally thrown onto the screen, and will also end the game should the player slice them.