This 1907 No Mint Mark Saint Gaudens Ultra High Relief Pattern PCGS just might be the most expensive legitimate item on Amazon. The coin is named after its designer, the sculptor Augustus Saint-Gaudens, who designed the obverse and reverse. It is considered by many to be the most beautiful of U.S. coins. Product page. Continue reading for a video, more hilarious reviews and information. 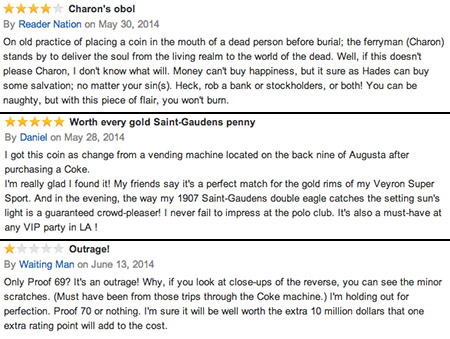 In 1904, President Theodore Roosevelt sought to beautify American coinage, and proposed Saint-Gaudens as an artist capable of the task. Although the sculptor had poor experiences with the Mint and its chief engraver, Charles E. Barber, Saint-Gaudens accepted Roosevelt’s call. The work was subject to considerable delays, due to Saint-Gaudens’s declining health and difficulties because of the high relief of his design. Saint-Gaudens died in 1907, after designing the eagle and double eagle, but before the designs were finalized for production. More information.