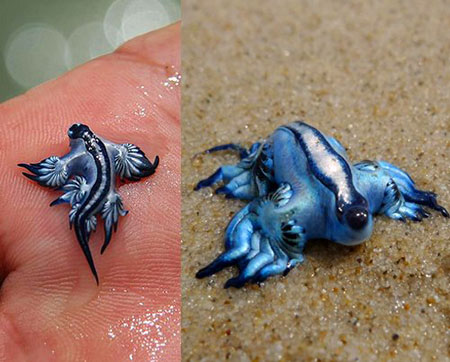 At first glance, it may appear as if this person is holding a real-life Pokemon, but it’s actually just the Glaucus Atlanticus, also known as Blue Dragons. As you can already tell, it “has dark blue stripes along the edge of its foot. It has a tapering body which is flattened and has six appendages which branch out into rayed cerata.” Continue reading for a video, more pictures, and additional information.

With the aid of a gas-filled sac in its stomach, Glaucus atlanticus floats at the surface. Due to the location of the gas sac the sea swallow floats upside down. The upper surface, actually the foot (the underside in other snails), has either a blue or blue-white coloration. The true dorsal surface (downwards in G. atlanticus) is completely silver-grey. This coloration is an example of counter shading, which helps protect it from predators from below, sides and above.

Scientists have often argued over whether Glaucus atlanticus moves on its own or depends on wind for locomotion. Glaucus is a hermaphrodite, containing both male and female reproductive organs. Unlike most nudibranchs, which mate with their right sides facing, sea swallows mate with ventral sides facing.[8] After mating, both animals produce egg strings.