No, you’re not looking at a car engine, but rather a CPU cooler, the Cooler Master V8 GTS to be exact. Its design was inspired by muscle cars, weighs a total of 964 grams including the fans, and measures 154 x 150 x 166mm, thanks to the inclusion of three triple tower aluminum fin heatsinks, eight heatpipes, two 140mm fans. This part takes advantage of Horizontal Vapor Chamber technology to dissipate heat 8x faster and avoid CPU hotspots. Continue reading for more pictures and information. 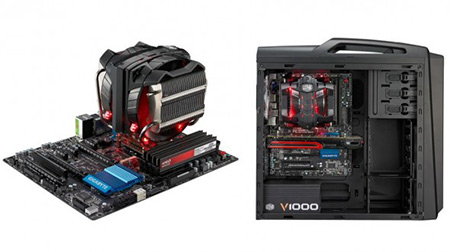 If you have a window in your case, you’ll also appreciate the red LEDs attached to the fans and the dustproof claim Coller Master makes.

Noise is also limited to a maximum of 36dBA while airflow is rated at between 28 and 82CFM depending on the fan speed. The V8 GTS will be available next month and costs $99.

What New York City Would Look Like Inside the Grand Canyon