The Horsehead Nebula (above) is a dark nebula in the constellation Orion, located just to the south of the star Alnitak, which is farthest east on Orion’s Belt, and is part of the much larger Orion Molecular Cloud Complex. It was first recorded in 1888 by Scottish astronomer Williamina Fleming on photographic plate B2312 taken at the Harvard College Observatory. The Horsehead Nebula is approximately 1500 light years from Earth. It is one of the most identifiable nebulae because of the shape of its swirling cloud of dark dust and gases, which bears some resemblance to a horse’s head when viewed from Earth. Continue reading for more. 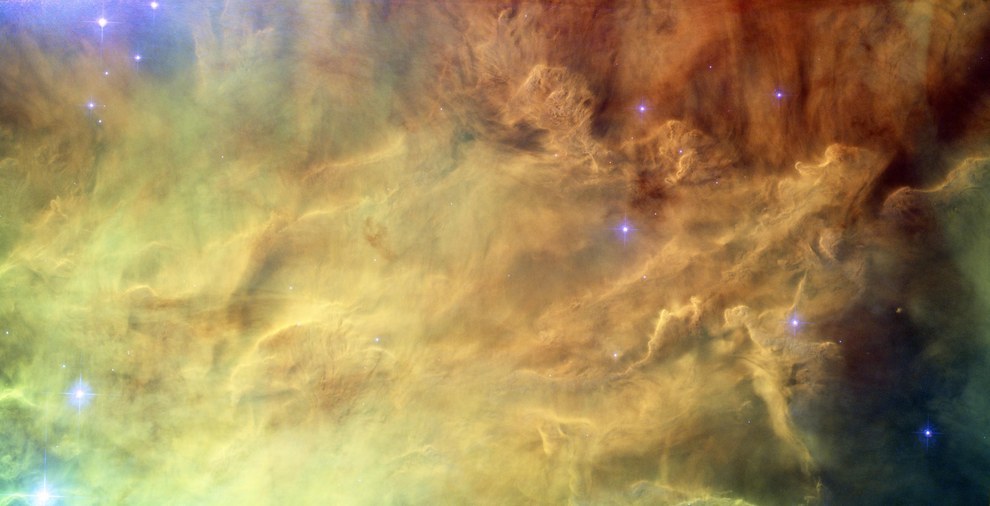 The Lagoon Nebula is a giant interstellar cloud in the constellation Sagittarius. The Lagoon Nebula is estimated to be between 4,000-6,000 light years from the Earth. In the sky of Earth, it spans 90′ by 40′, translates to an actual dimension of 110 by 50 light years. Like many nebulas, it appears pink in time-exposure color photos but is gray to the eye peering through binoculars or a telescope, human vision having poor color sensitivity at low light levels. 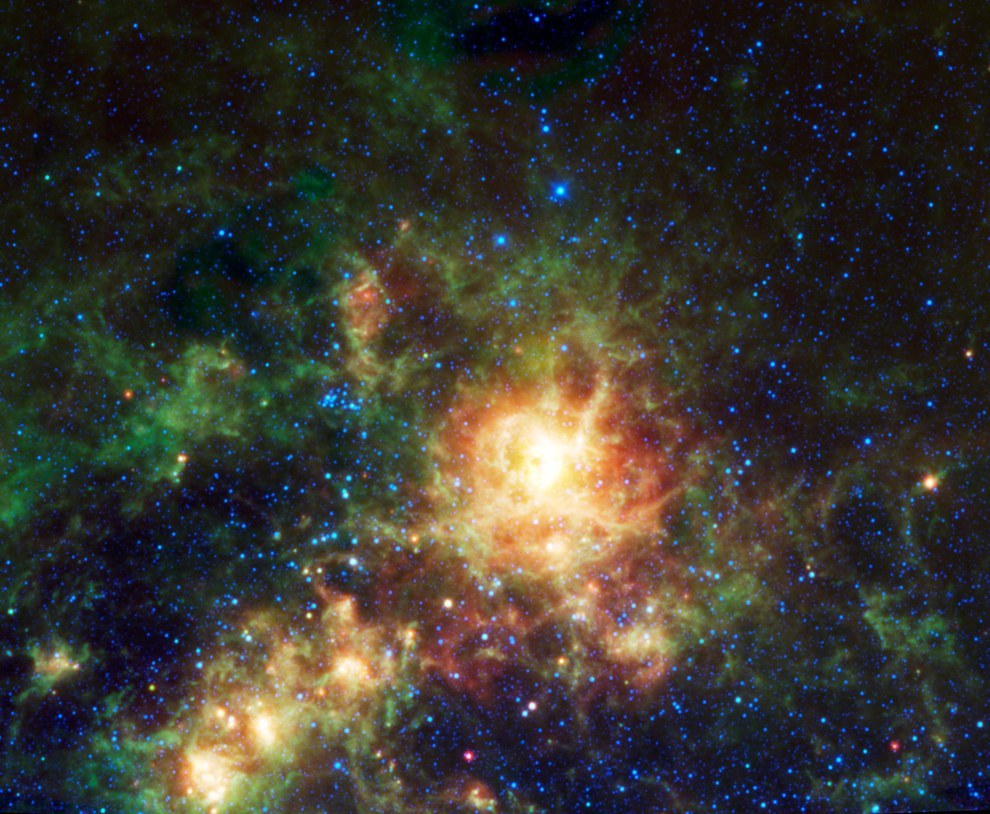 The Tarantula Nebula is an H II region in the Large Magellanic Cloud (LMC). It was originally thought to be a star, but in 1751 Nicolas Louis de Lacaille recognized its nebular nature. The Tarantula Nebula has an apparent magnitude of 8. Considering its distance of about 49 kpc (160,000 light-years), this is an extremely luminous non-stellar object. Its luminosity is so great that if it were as close to Earth as the Orion Nebula, the Tarantula Nebula would cast shadows. In fact, it is the most active starburst region known in the Local Group of galaxies. 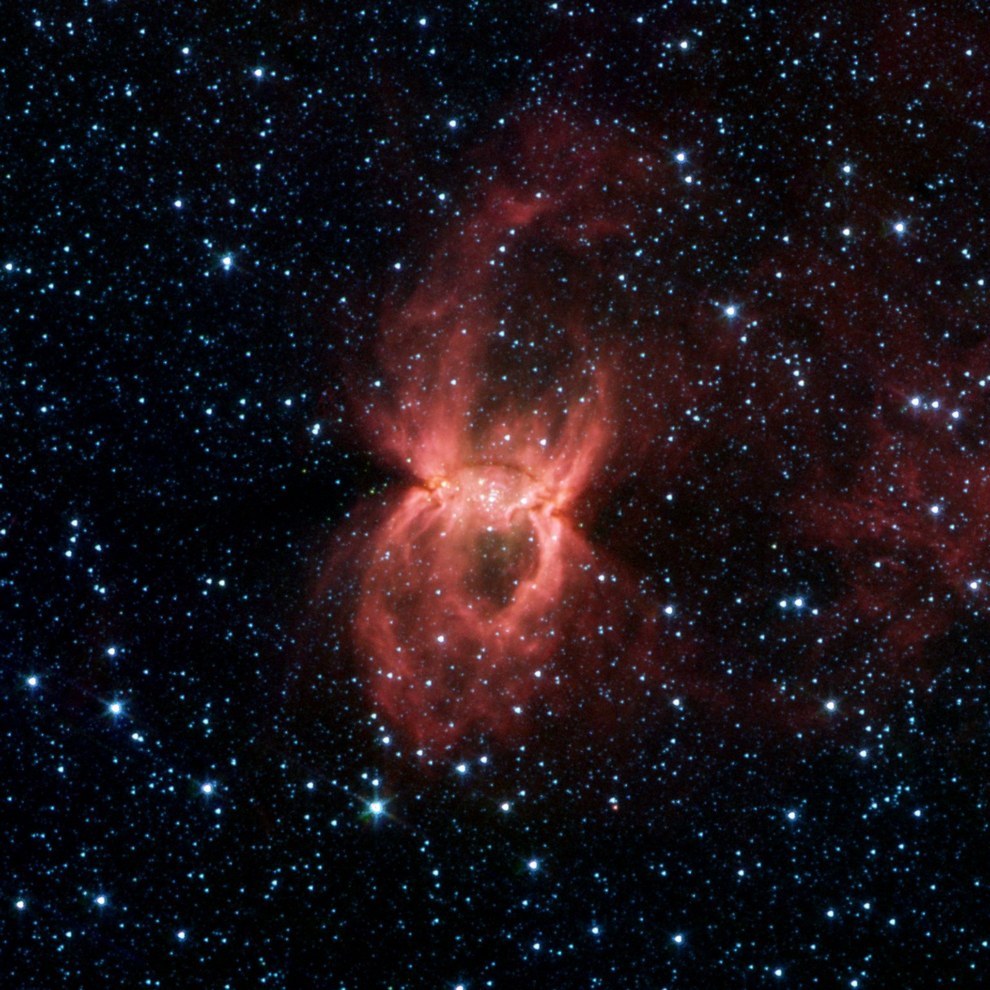 In the case of the Black Widow Nebula, astronomers suspect that a large cloud of gas and dust condensed to create multiple clusters of massive star formation. The combined winds from these groups of large stars probably blew out bubbles into the direction of least resistance, forming a double bubble. 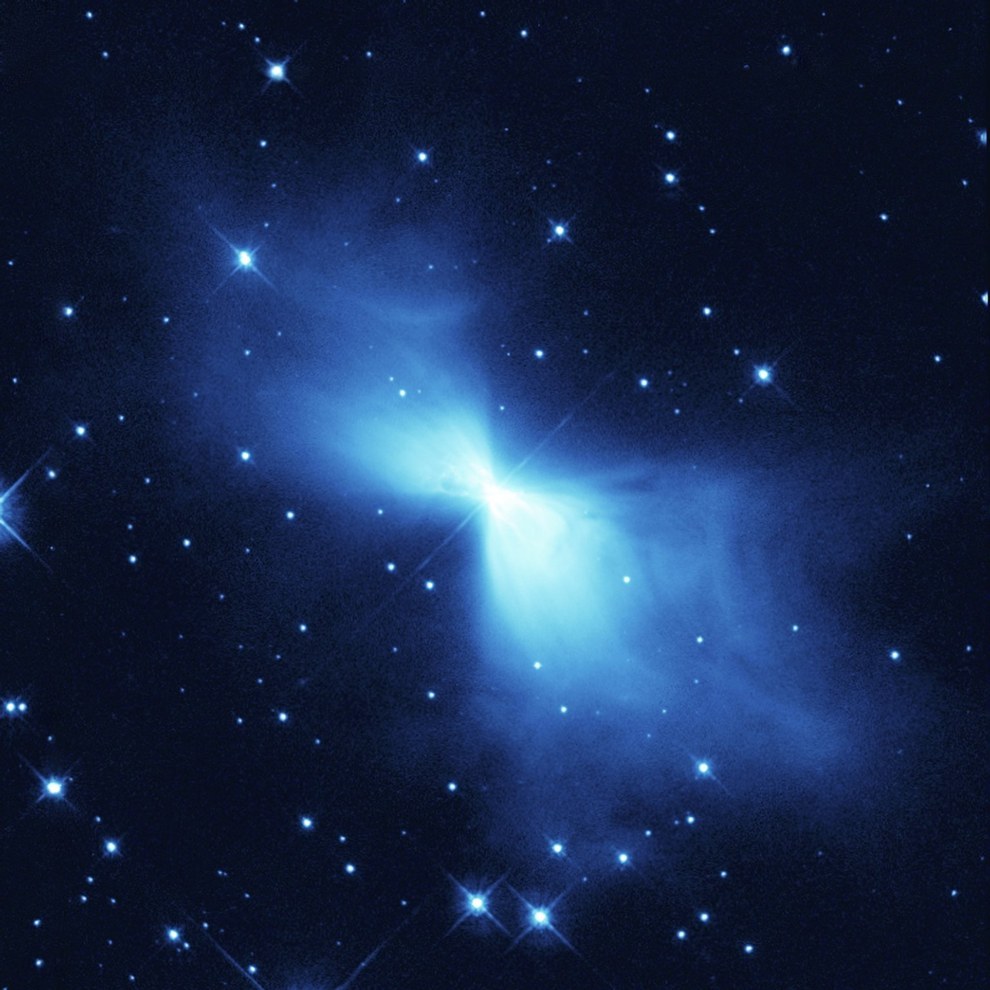 The Boomerang Nebula is a protoplanetary nebula located 5,000 light-years away from Earth in the constellation Centaurus. It is also known as the Bow Tie Nebula and catalogued as PGC 3074547. The nebula’s temperature is measured at 1 K (−272.15 °C; −457.87 °F) making it the coolest natural place currently known in the Universe. The Boomerang Nebula is believed to be a star system evolving toward the planetary nebula phase. It continues to form and develop due to the outflow of gas from its core where a star in its late stage life sheds mass and emits starlight illuminating dust in the nebula. 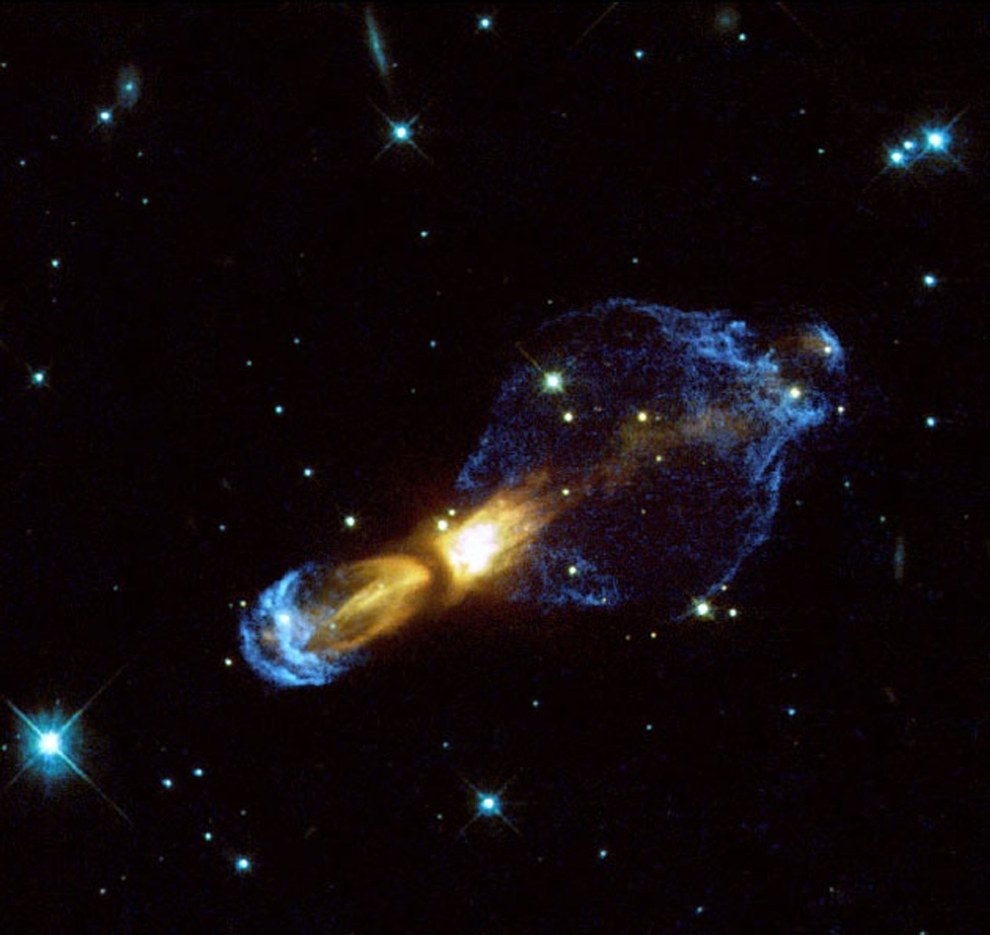 Rotten Egg Nebula is a protoplanetary nebula (PPN) 1.4 light years (13 Pm) long and located some 5,000 light years (47 Em) from Earth in the constellation Puppis. Violent gas collisions that produced supersonic shock fronts in a dying star are seen in a new, detailed image from NASA’s Hubble Space Telescope. The object is sometimes called the Rotten Egg Nebula because it contains a relatively large amount of sulfur. The densest parts of the nebula are composed of material ejected recently by the central star and accelerated in opposite directions. 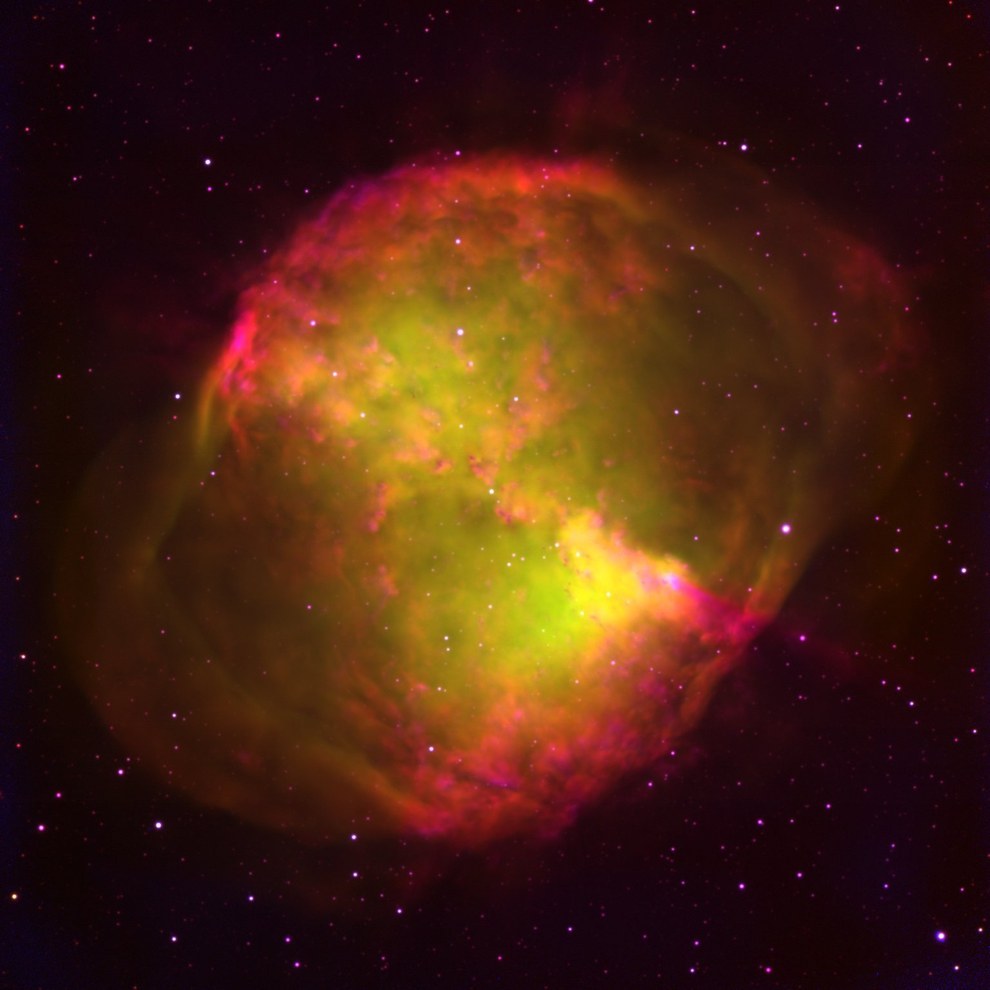 The Dumbbell Nebula is a planetary nebula in the constellation Vulpecula, at a distance of about 1,360 light years. This object was the first planetary nebula to be discovered; by Charles Messier in 1764. At its brightness of visual magnitude 7.5 and its diameter of about 8 arcminutes, it is easily visible in binoculars, and a popular observing target in amateur telescopes. 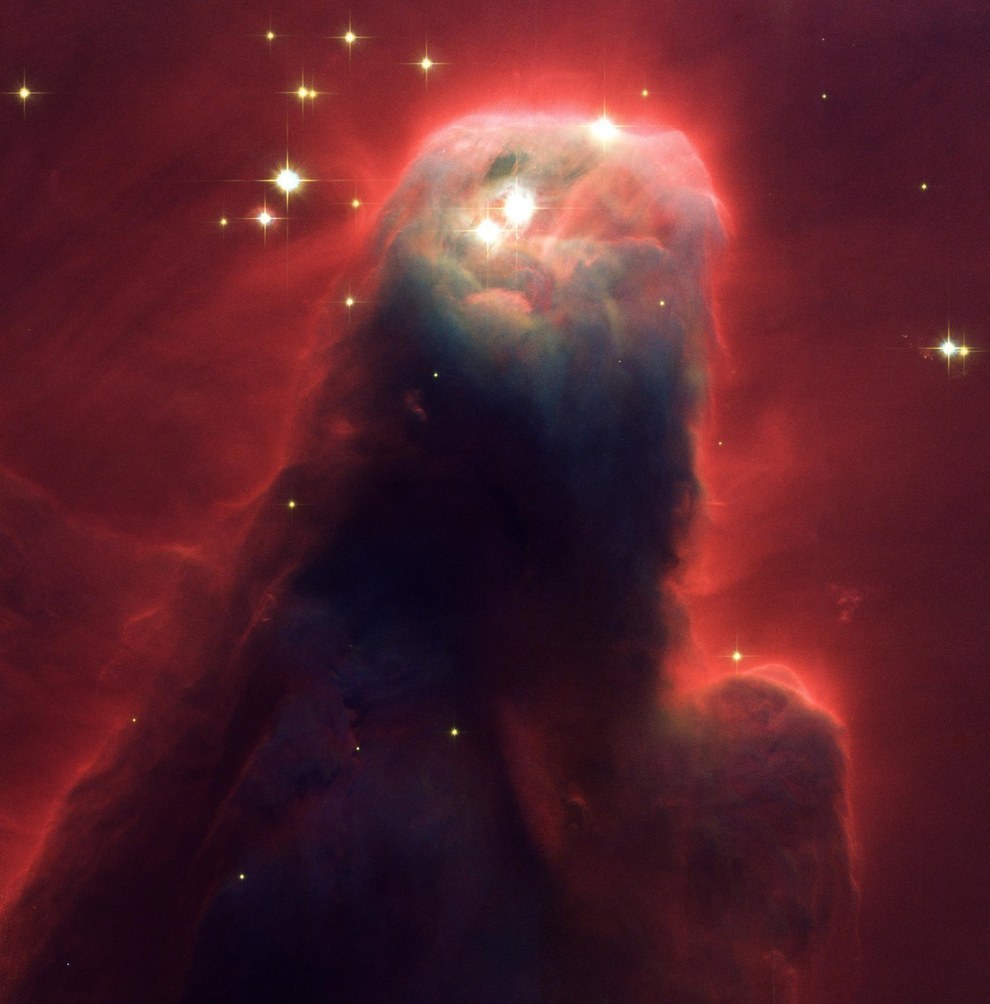 The Cone Nebula is an H II region in the constellation of Monoceros, located about 830 parsecs or 2,700 light-years away from Earth. The Cone Nebula forms part of the nebulosity surrounding the Christmas Tree Cluster. The diffuse Cone Nebula, so named because of its apparent shape, lies in the southern part of NGC 2264, the northern part being the magnitude-3.9 Christmas Tree Cluster. It is in the northern part of Monoceros, just north of the midpoint of a line from Procyon to Betelgeuse. The cone’s shape comes from a dark absorption nebula consisting of cold molecular hydrogen and dust in front of a faint emission nebula containing hydrogen ionized by S Monocerotis, the brightest star of NGC 2264. 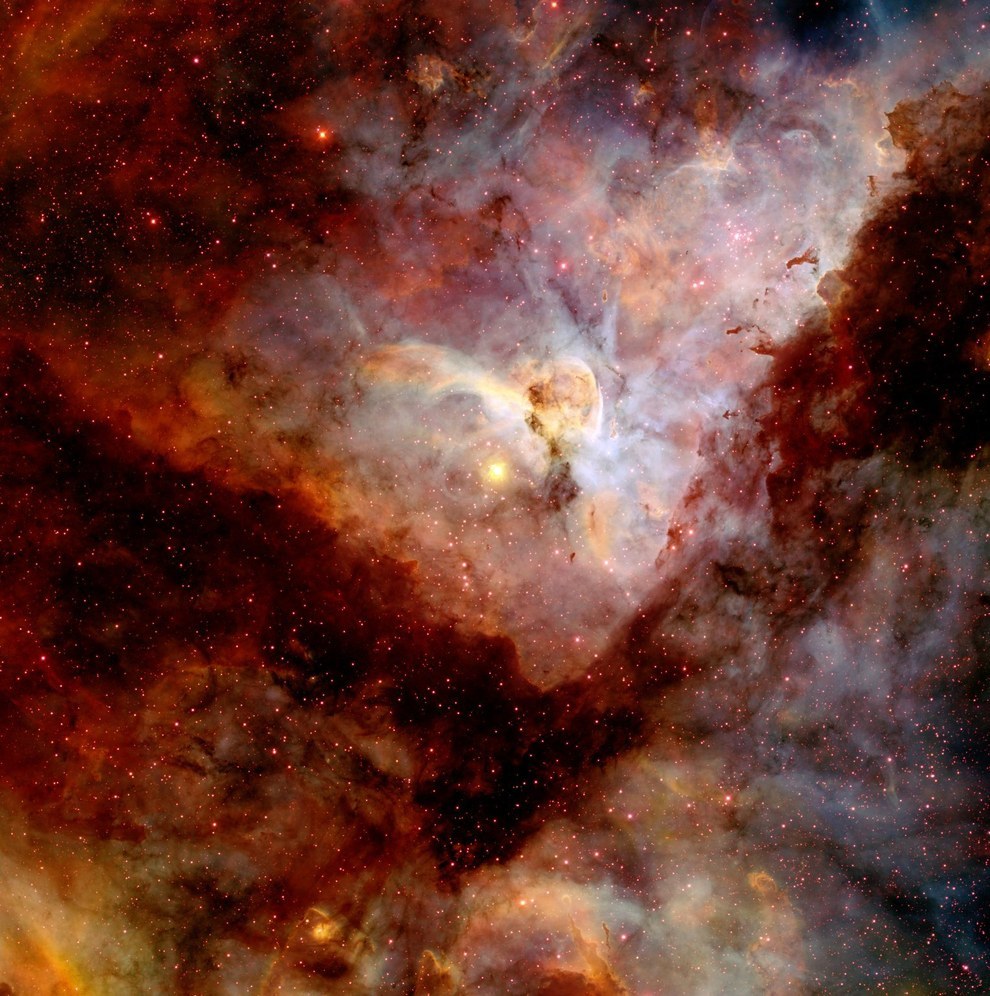 The Carina Nebula is a large bright nebula that has within its boundaries several related open clusters of stars. Some papers generally refer to this as the Carina Nebula, mostly because of differentiating the many papers published on this object, but the historical precedence as determined by southern observers like James Dunlop and John Herschel, who have both termed it the Eta Argus Nebula or Eta Carinae Nebula. John Herschel also describes “The star η Argus, with the Great nebula about it.” with many of his subsequent published papers supporting this.

The Eagle Nebula is a young open cluster of stars in the constellation Serpens, discovered by Jean-Philippe de Cheseaux in 1745-46. Its name derives from its shape that is thought to resemble an eagle. It contains several active star-forming gas and dust regions, including the famous “Pillars of Creation”, photographed by the Hubble Space Telescope. 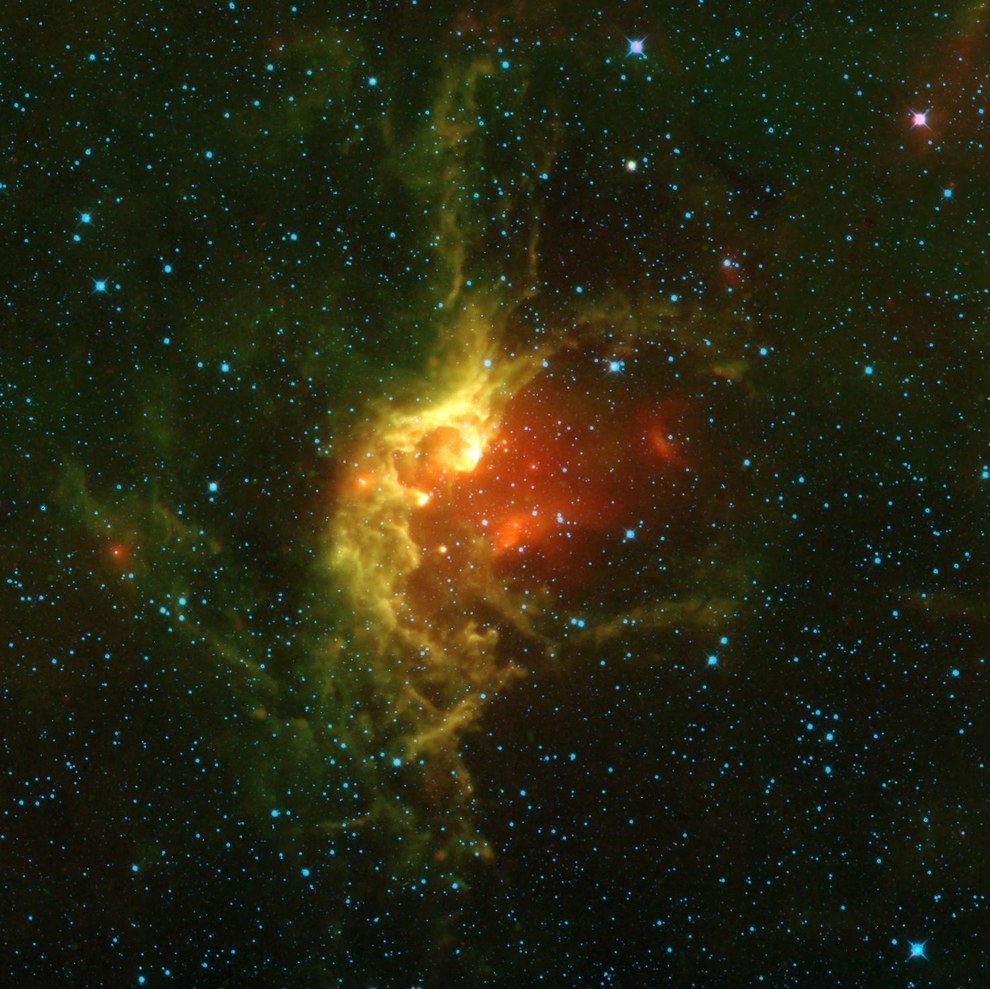 The Wizard Nebula is an open cluster discovered by Caroline Herschel in 1787. William Herschel included his sister’s discovery in his catalog, and labelled it H VIII.77. It is extremely difficult to observe visually, usually requiring very dark skies and an O-III filter.

You Can Either Buy a Car, Or Use a 3D Printer to Make Your Own, Like This Company