A railgun is basically an electrically powered electromagnetic projectile launcher based on similar principles to the homopolar motor. A railgun comprises a pair of parallel conducting rails, along which a sliding armature is accelerated by the electromagnetic effects of a current that flows down one rail, into the armature and then back along the other rail. Continue reading for more. 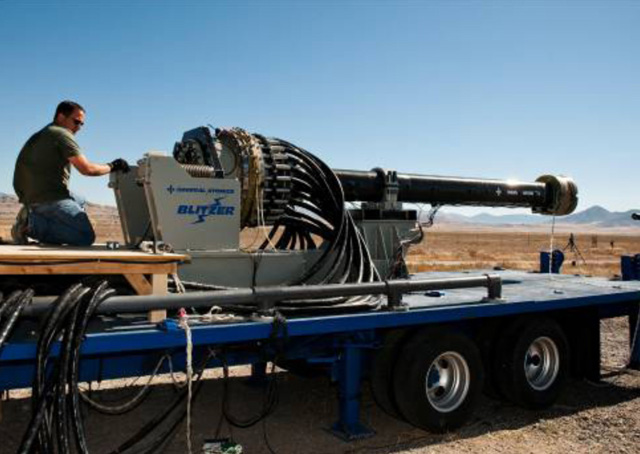 Blitzer is less about ultimate velocity and muzzle energy and more about proving a viable weapon. Its projectiles fly at Mach 5, and are much more advanced towards being actual munitions. With this weapon, the armature which moves along the rails and carries the driving current between them is merely a “sabot” which propels the actual projectile to launch speed and then falls off shortly after clearing the muzzle – rather as in the case of modern armour piercing tank ammo, which consists of a fin-stabilized penetrator dart which rides down the cannon barrel on discarding sabots. 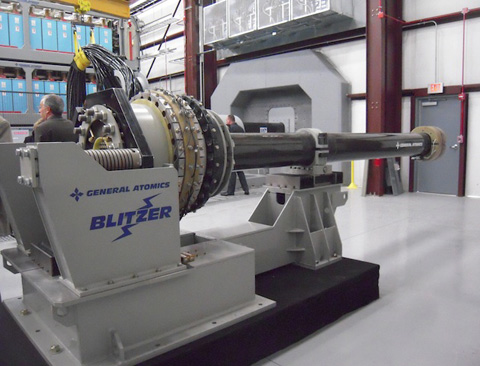 During one of the tests, the projectile was able to travel an additional 7 kilometres (4.3 mi) downrange after penetrating a 1⁄8 inch (3.2 mm) thick steel plate. The company hopes to have an integrated demo of the system by 2016 followed by production by 2019, pending funding. Thus far, the project is self-funded.

In October 2013, General Atomics unveiled a land based version of the Blitzer railgun. A company official claimed the gun could be ready for production in “two to three years.

Railguns are being examined for use as anti-aircraft weapons to intercept air threats, particularly anti-ship cruise missiles, in addition to land bombardment. A supersonic sea-skimming anti-ship missile can appear over the horizon 20 miles from a warship, leaving a very short reaction time for a ship to intercept it. Even if conventional defense systems react fast enough, they are expensive and only a limited number of large interceptors can be carried.

You Can Either Buy a Car, Or Use a 3D Printer to Make Your Own, Like This Company