The community of Wytheville, Virginia experienced a series of UFO encounters in 1987, with the first sighting being made by three policeman who were all former military. On October 7, 1987, WYVE radio station news reporter Danny Gordon received a telephone call from the local Sheriff about this incident. Two weeks later, on October 21, Gordon, along with his friend Roger Hall, a commercial pilot, took a drive to the southern part of Wythe County, where most of the UFO reports had originated. During their drive home both men spotted a large, domed, wingless object moving toward them. Roger Hall said that the object was the size of two football in length, there were three windows on the craft, light coming out from the inside, and a red ball moving toward what he felt was a mother ship. Continue reading for more. 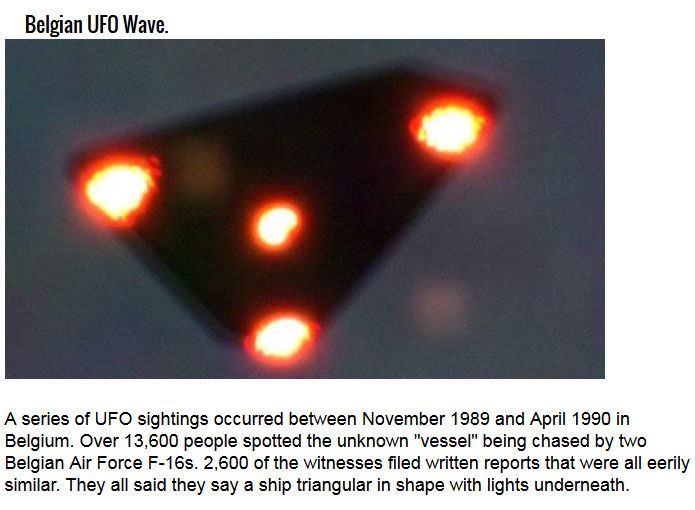 The Belgian UFO wave began in November 1989. The events of November 29th would be documented by no less than thirty different groups of witnesses, and three separate groups of police officers. All of the reports related a large object flying at low altitude. The craft was of a flat, triangular shape, with lights underneath. This giant craft did not make a sound as it slowly moved across the landscape of Belgium. There was free sharing of information as the Belgian populace tracked this craft as it moved from the town of Liege to the border of the Netherlands and Germany. The Belgian UFO wave peaked with the events of the night of March 30-31, 1990. On that night unknown objects were tracked on radar, chased by two Belgian Air Force F-16s, photographed, and were sighted by an estimated 13,500 people on the ground – 2,600 of whom filed written statements describing in detail what they had seen. Following the incident the Belgian air force released a report detailing the events of that night. 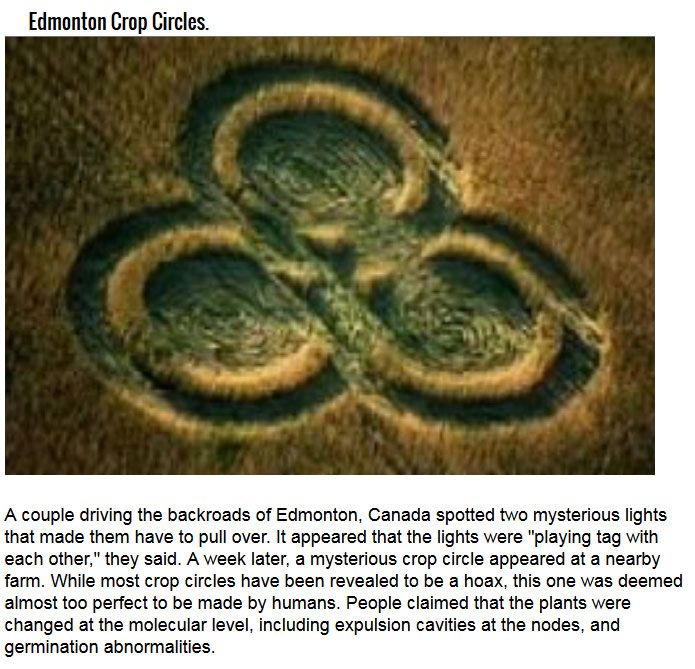 Crop circles appeared in a farmer’s field in Duhamel in 1967. At the time, crop circles were virtually unknown. The discovery of the circles was preceded by reports of UFO sightings around the town. A farmer by the name of Schielke discovered the strange occurrence on Saturday, August 5, 1967, after a night of heavy rains. This was the first time he had been to his fields in weeks, so the circles could have appeared at any time during that period. The circles were composed of four circular marks approximately 30 feet (9.1 m) in diameter. Mr. Schielke always stressed that the marks could not have been made by his equipment, and he did not believe in UFOs. The marks varied from five to seven inches wide, and the smallest circular mark was 31 ft., 9 in. in diameter. Three of the rings were essentially circular, with the largest mark being slightly elliptical, varying from 34 ft., 5 in. to 36 ft., 3 in. There were no exhaust blasts, scorch marks or disturbances of the soil, and vegetation within the circles had apparently been removed by the object that made the marks. The official investigation report implies that the marks were most likely left by a 135-ton aircraft or spacecraft. This case is described as “unsolved” by Canada’s Department of National Defence. 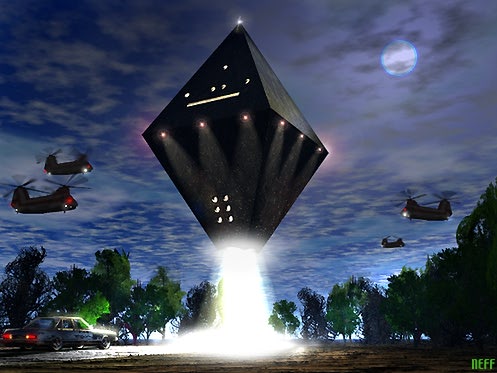 On the evening of December 29, 1980, Betty Cash, Vickie Landrum and Colby Landrum (Vickie’s seven-year-old grandson) were driving home to Dayton, Texas in Cash’s Oldsmobile Cutlass after dining out. At about 9:00pm., while driving on an isolated two-lane road in dense woods, the witnesses said they observed a light above some trees. They initially thought the light was an airplane approaching Houston Intercontinental Airport (about 35 miles away) and gave it little notice. A few minutes later on the winding roads, the witnesses saw what they believed to be the same light as before, but it was now much closer and very bright. The light, they claimed, came from a huge diamond-shaped object, which hovered at about treetop level. The object’s base was expelling flame and emitting significant heat. The witnesses said the heat was strong enough to make the car’s metal body painful to the touch – Cash said she had to use her coat to protect her hand from being burnt when she finally re-entered the car. When she touched the car’s dashboard, Vickie Landrum’s hand pressed into the softened vinyl, leaving an imprint that was evident weeks later. Investigators cited this handprint as proof of the witnesses’ account; however, no photograph of the alleged handprint exists. The object then moved to a point higher in the sky. As it ascended over the treetops, the witnesses claimed that a group of helicopters approached the object and surrounded it in tight formation. Cash and Landrum counted 23 helicopters, and later identified some of them as tandem-rotor CH-47 Chinooks used by military forces worldwide. 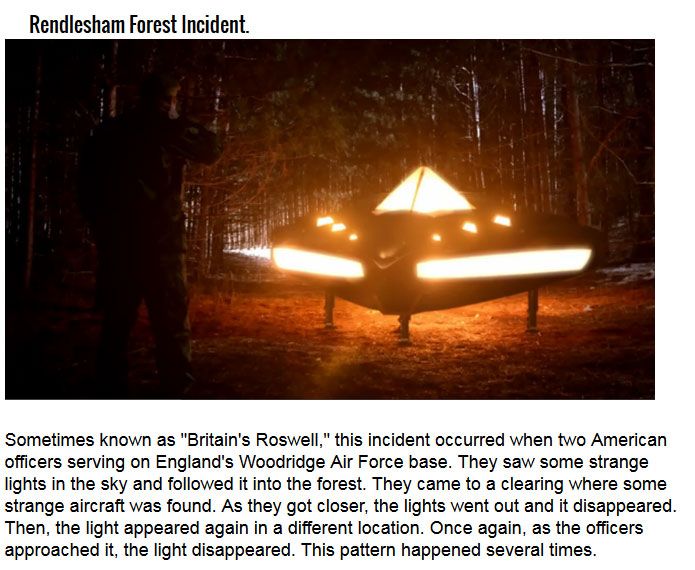 The Rendlesham Forest incident is the name given to a series of reported sightings of unexplained lights and the alleged landing of a craft or multiple craft of unknown origin in Rendlesham Forest, Suffolk, England, in late December 1980, just outside RAF Woodbridge, used at the time by the U.S. Air Force. Dozens of USAF personnel were eyewitnesses to various events over a two- or three-day period. It is the most famous UFO event to have happened in Britain, ranking amongst the best-known UFO events worldwide. Along with the Berwyn Mountain UFO incident, it has been compared to the Roswell UFO incident in the United States, and is sometimes referred to as “Britain’s Roswell” 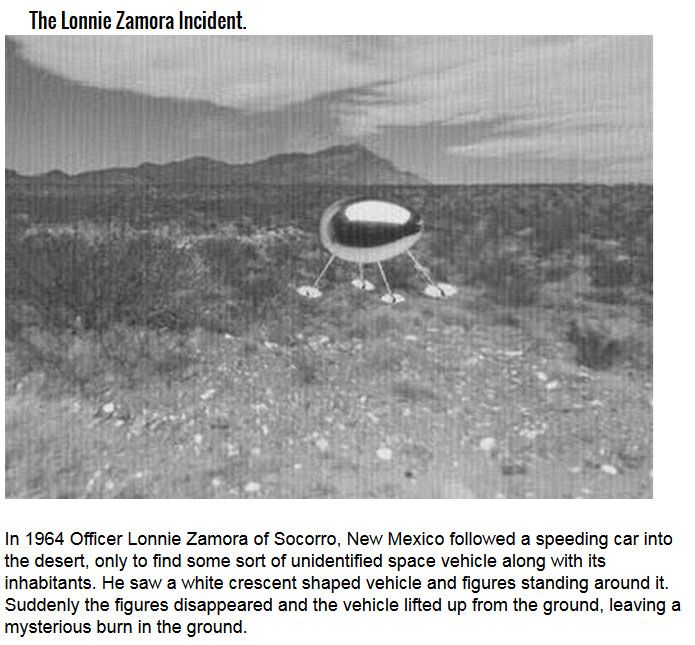 The Lonnie Zamora incident was a UFO close encounter of the third kind which occurred on Friday, April 24, 1964, at about 5:50 p.m., on the southern outskirts of Socorro, New Mexico. Several primary witnesses emerged to report stages and aspects of the event, which included the craft’s approach, din, conspicuous flame, and physical evidence left behind immediately afterward. It was however Lonnie Zamora, a New Mexico State police officer who was on duty at the time, who came closest to the object and provided the most prolonged and comprehensive account. Some physical trace evidence left behind – burned vegetation and soil, ground landing impressions, and metal scrapings on a broken rock in one of the impressions – was subsequently observed and analyzed by investigators for the military, law enforcement, and civilian UFO groups. The event and its body of evidence is sometimes deemed one of the best documented, yet most perplexing UFO reports. It was immediately investigated by the U.S. Army, U.S. Air Force, and FBI, and received considerable coverage in the mass media. It was one of the cases that helped persuade astronomer J. Allen Hynek, one of the primary investigators for the Air Force, that some UFO reports represented an intriguing mystery. After extensive investigation, the AF’s Project Blue Book was unable to come up with a conventional explanation and listed the case as an “unknown”.

When Smartphones are Combined with Halloween Costumes, You Get These Creepy High-Tech Creations