Betty and Barney Hill were an American couple who claimed to have been abducted by extraterrestrials in a rural portion of New Hampshire on September 19-20, 1961. The couple’s story, called the Hill Abduction, and occasionally the Zeta Reticuli Incident, was that they had been kidnapped for a short time by a UFO. The Hill Abduction claim was the first widely publicized report of alien abduction, adapted into the best-selling 1966 book The Interrupted Journey and the 1975 television movie The UFO Incident. Many of Betty Hill’s notes, tapes, and other items have been placed in a permanent collection at the University of New Hampshire, her alma mater. Continue reading for more. 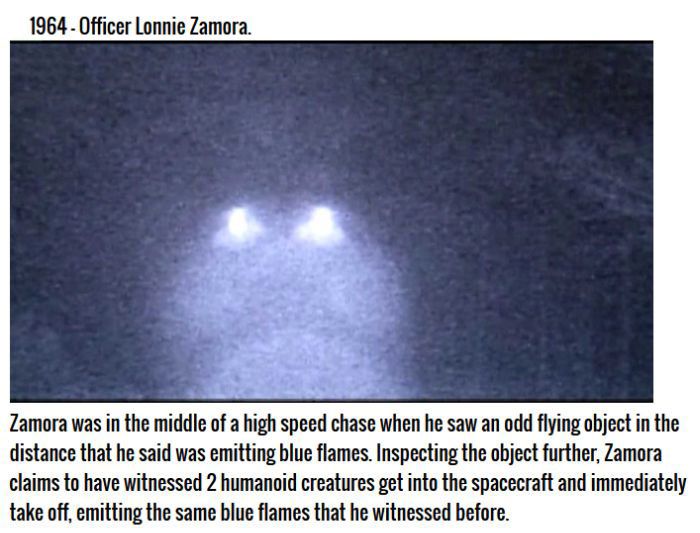 The Lonnie Zamora incident was a UFO close encounter of the third kind which occurred on Friday, April 24, 1964, at about 5:50 p.m., on the southern outskirts of Socorro, New Mexico. Several primary witnesses emerged to report stages and aspects of the event, which included the craft’s approach, din, conspicuous flame, and physical evidence left behind immediately afterward. It was however Lonnie Zamora, a New Mexico State police officer who was on duty at the time, who came closest to the object and provided the most prolonged and comprehensive account. Some physical trace evidence left behind – burned vegetation and soil, ground landing impressions, and metal scrapings on a broken rock in one of the impressions – was subsequently observed and analyzed by investigators for the military, law enforcement, and civilian UFO groups. The event and its body of evidence is sometimes deemed one of the best documented, yet most perplexing UFO reports. It was immediately investigated by the U.S. Army, U.S. Air Force, and FBI, and received considerable coverage in the mass media. It was one of the cases that helped persuade astronomer J. Allen Hynek, one of the primary investigators for the Air Force, that some UFO reports represented an intriguing mystery. 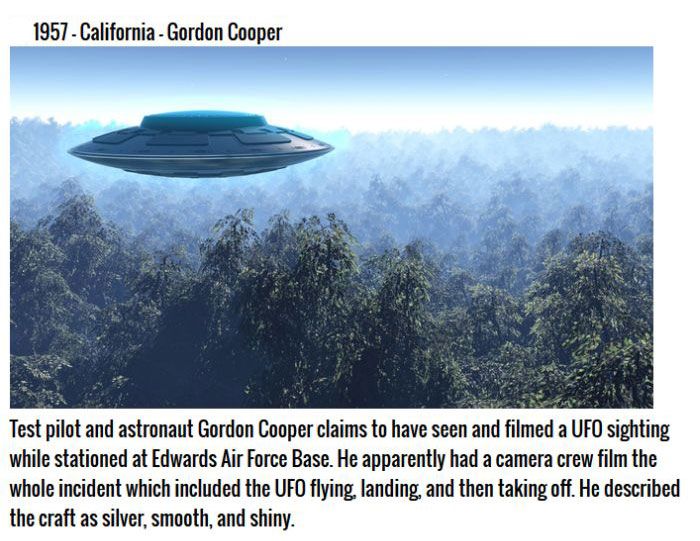 Cooper claimed to have seen his first UFO while flying over West Germany in 1951, although he denied reports he had seen a UFO during his Mercury flight. In 1957, when Cooper was 30 and a Captain, he was assigned to Fighter Section of the Experimental Flight Test Engineering Division at Edwards AFB in California. He acted as a test pilot and project manager. On May 3 of that year, he had a crew setting up an Askania Cinetheodolite precision landing system on a dry lake bed. This cinetheodolite system would take pictures at one frame per second as an aircraft landed. The crew consisted of James Bittick and Jack Gettys who began work at the site just before 0800, using both still and motion picture cameras. According to his accounts, later that morning they returned to report to Cooper that they saw a “strange-looking, saucer-like” aircraft that did not make a sound either on landing or take-off. He held claim until his death that the U.S. government is indeed covering up information about UFOs. 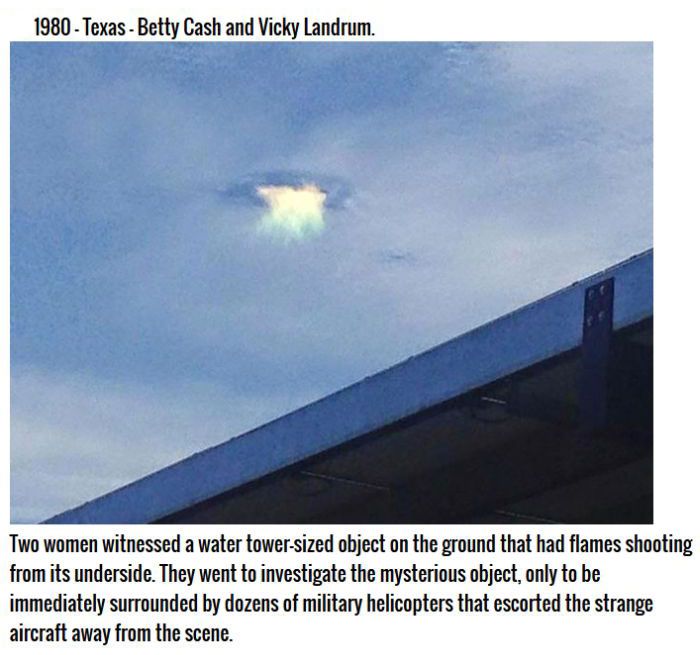 On the evening of December 29, 1980, Betty Cash, Vickie Landrum and Colby Landrum (Vickie’s seven-year-old grandson) were driving home to Dayton, Texas in Cash’s Oldsmobile Cutlass after dining out. At about 9.00 p.m., while driving on an isolated two-lane road in dense woods, the witnesses said they observed a light above some trees. They initially thought the light was an airplane approaching Houston Intercontinental Airport (about 35 miles away) and gave it little notice. A few minutes later on the winding roads, the witnesses saw what they believed to be the same light as before, but it was now much closer and very bright. The light, they claimed, came from a huge diamond-shaped object, which hovered at about treetop level. The object’s base was expelling flame and emitting significant heat.

Vickie Landrum told Cash to stop the car, fearing they would be burned if they approached any closer. Anxious, Cash considered turning the car around, but abandoned this idea because the road was too narrow and she presumed the car would get stuck on the dirt shoulders, which were soft from that evening’s rains. The witnesses said the heat was strong enough to make the car’s metal body painful to the touch�Cash said she had to use her coat to protect her hand from being burnt when she finally re-entered the car. When she touched the car’s dashboard, Vickie Landrum’s hand pressed into the softened vinyl, leaving an imprint that was evident weeks later. Investigators cited this handprint as proof of the witnesses’ account; however, no photograph of the alleged handprint exists.

The object then moved to a point higher in the sky. As it ascended over the treetops, the witnesses claimed that a group of helicopters approached the object and surrounded it in tight formation. Cash and Landrum counted 23 helicopters, and later identified some of them as tandem-rotor CH-47 Chinooks used by military forces worldwide. 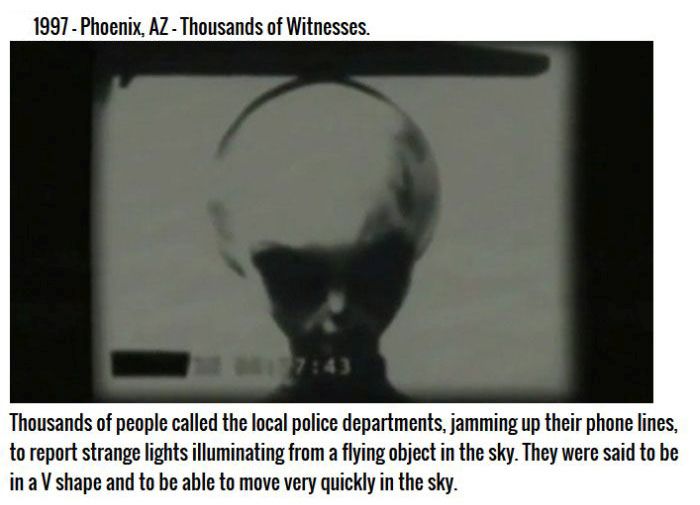 The Phoenix Lights was a UFO sighting which occurred in Phoenix, Arizona, and Sonora, Mexico on Thursday, March 13, 1997.Lights of varying descriptions were seen by thousands of people between 19:30 and 22:30 MST, in a space of about 300 miles (480 km), from the Nevada line, through Phoenix, to the edge of Tucson. Witnesses claim to have observed a huge carpenter’s square-shaped UFO, containing five spherical lights or possibly light-emitting engines. Fife Symington, the governor at the time, was one witness to this incident; he later called the object “otherworldly. 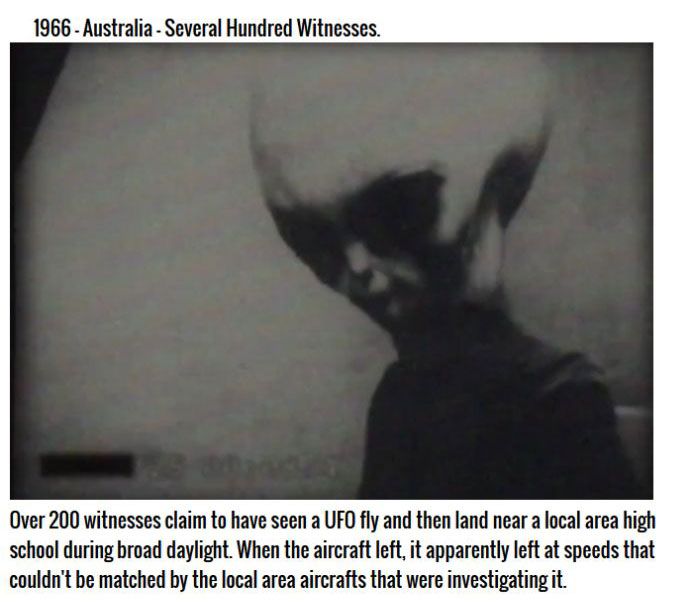 At approximately 11.00 am on Wednesday, 6 April 1966, a class of students and a teacher from Westall High School (now Westall Secondary College) were just completing sport on the main oval when an object, described as being a grey saucer-shaped craft with a slight purple hue and being about twice the size of a family car, was alleged to have been seen. Witness descriptions were mixed: Andrew Greenwood, a science teacher, told The Dandenong Journal at the time that he saw a silvery-green disc. According to witnesses the object was descending and then crossed and overflew the high school’s south-west corner, going in a south-easterly direction, before disappearing from sight as it descended behind a stand of trees and into a paddock at The Grange in front of the Westall State School (primary students). After a short period (approximately 20 minutes) the object – with witnesses now numbering over 200 – then climbed at speed and departed towards the north-west. As the object gained altitude some accounts describe it as having been pursued from the scene by five unidentified aircraft which circled the object.