Here’s a fascinating look at tailless whip scorpions, also known as amblypygids. The name “amblypygid” means “blunt rump”, a reference to a lack of the telson (“tail”) carried by related species. Amblypygids like to be in tight, dark spaces. A ten gallon tank or critter keeper is enough space for a single individual, although a breeding pair will need more room, and an individual from a more diminutive species can be kept in a smaller tank. Continue reading to see more. 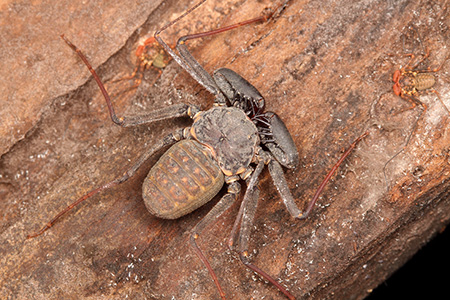 Tailless whip scorpions often move about sideways on their six walking legs, with one “whip” pointed in the direction of travel while the other probes their other sides. Prey are located with these “whips”, captured with pedipalps, then masticated with chelicerae. 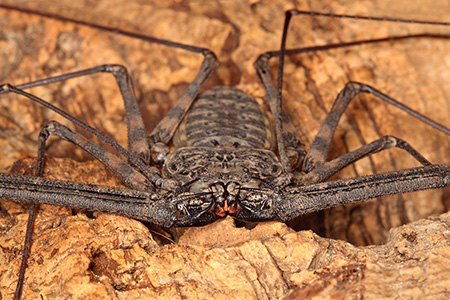 Amblypygi, another name for tailless whip scorpion, is an order of invertebrate animals belonging to the class Arachnida, in the subphylum Chelicerata of the phylum Arthropoda. They form a separate order of arachnids alongside the spiders, scorpions and others.

3. They Have Poor Eyesight 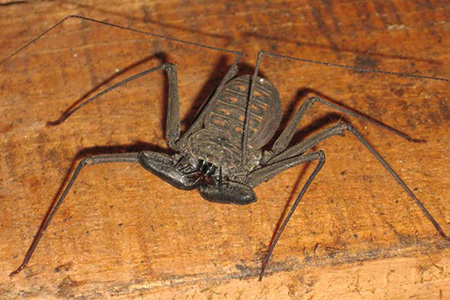 Amblipygids possess medium to poor eyesight, however their pedipalps, which serve as sensors for many akin arachnids, are modified and inward-adapted for grabbing and retaining prey, much like those of a praying mantis. The first pair of legs are also modified and act as sensory organs, while the animal uses the other six legs for walking. The sensory legs are very thin, have numerous sensory receptors, and can extend several times the length of body. 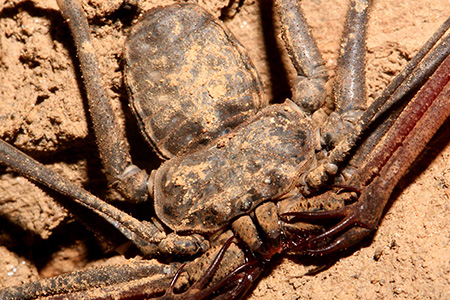 Amblypygids possess no silk glands or venomous fangs, however their chelicerae do eject a digestive acidic enzyme, unlike those of sun spiders, for example. They rarely bite if threatened, but can grab fingers with pedipalps, resulting in thorn-like puncture injury.

1. They Eat Any Insect Prey

Amblypygids will consume any sort of insect prey. The size of the insect to be fed should be judged in accordance to the individual animal; in general, do not feed anything much larger than the amblypygid’s abdomen. Like most arachnids, amblypygids only need to be fed once a week, and can go for two or three weeks without food, although this is not advisable.

This is Why You Shouldn’t Ship Yourself in a Box

How Geeks Respond to One Letter “K” Text Messages