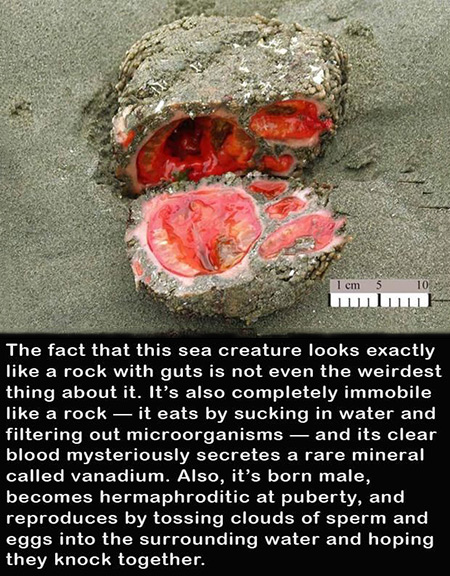 There are some fascinating things in this world that just can’t be explained by science, and this rock-looking creature is included. In addition to looking exactly like a rock, it feeds on microorganisms from the water and has clear blood that secretes a rare mineral called vanadium. Continue reading for more fascinating discoveries that can’t be explained by science.

The Antikythera mechanism is an ancient analog computer designed to predict astronomical positions and eclipses. It was recovered in 1900-1901 from the Antikythera wreck, a shipwreck off the Greek island of Antikythera. Although the computer’s construction has been attributed to the Greeks and dated to the early 1st century BC, its significance and complexity were not understood until the 1970s when it was analyzed with modern X-ray technology. Technological artifacts approaching its complexity and workmanship did not appear again until the 14th century, when mechanical astronomical clocks began to be built in Western Europe.

Upsweep is an unidentified sound detected on the American National Oceanic and Atmospheric Administration’s equatorial autonomous hydrophone arrays. This sound was present when the Pacific Marine Environmental Laboratory began recording its sound surveillance system SOSUS in August, 1991. It consists of a long train of narrow-band upsweeping sounds of several seconds in duration each. The source level is high enough to be recorded throughout the Pacific.

A placebo is a simulated or otherwise medically ineffectual treatment for a disease or other medical condition intended to deceive the recipient. Sometimes patients given a placebo treatment will have a perceived or actual improvement in a medical condition, a phenomenon commonly called the placebo effect.

Astronomers have discovered an impossible world – a rocky exoplanet that orbits its star at distance of less than 1.5 million kilometres and swelters at 2,000 degrees Celsius. Science cannot yet explain how these worlds came to be in such tight orbits. What is known for sure about the planet, called Kepler-78b, is that it has 1.7 times the mass of Earth and is 1.2 times wider, with a diameter of 15,300 kilometres. Its density is just a tad less than Earth’s – 5.3 grams per cubic centimetre compared to 5.5 – meaning Kepler-78b must be made from iron and rock. It revolves around its star every 8.5 hours.

The Naga fireballs is a phenomenon with unconfirmed source said to be often seen in Thailand’s Mekong river, in which glowing balls are alleged to naturally rise from the water high into the air. The balls are said to be reddish and to have diverse sizes from smaller sparkles up to the size of basketballs; they quickly rise up to a couple of hundred meters before disappearing. The number of fireballs reported varies between tens and thousands per night.