The Tsar Bomba is the nickname for the AN602 hydrogen bomb, the most powerful nuclear weapon ever detonated. The artificial explosion on October 30, 1961 remains the most powerful in human history. It was developed by the Soviet Union and had the yield of 50 to 58 megatons of TNT (210 to 240 PJ). Only one bomb of this type was ever officially built and it was tested in the Novaya Zemlya archipelago, at Sukhoy Nos. Continue reading for more. 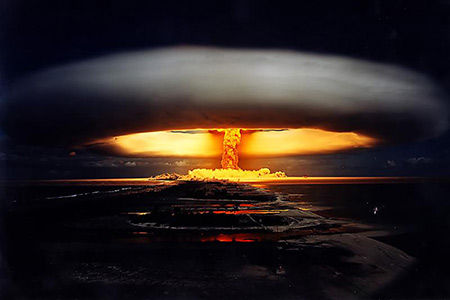 The Tsar Bomba was a three-stage Teller-Ulam design Lithium bomb with a yield of 50 to 58 megatons of TNT (210 to 240 PJ). This is equivalent to about 1,350-1,570 times the combined power of the bombs that destroyed Hiroshima and Nagasaki, 10 times the combined power of all the conventional explosives used in World War II, or one quarter of the estimated yield of the 1883 eruption of Krakatoa, and 10% of the combined yield of all nuclear tests to date. A three-stage H-bomb uses a fission bomb primary to compress a thermonuclear secondary, as in most H-bombs, and then uses energy from the resulting explosion to compress a much larger additional thermonuclear stage. There is evidence that the Tsar Bomba had several third stages rather than a single very large one. 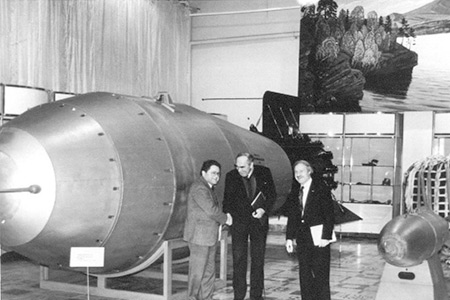 The Tsar Bomba was flown to its test site by a specially modified Tu-95V release plane, flown by Major Andrei Durnovtsev. Taking off from an airfield in the Kola Peninsula, the release plane was accompanied by a Tu-16 observer plane that took air samples and filmed the test. Both aircraft were painted with a special reflective white paint to limit heat damage. The bomb, weighing 27 metric tons, was so large that the Tu-95V had to have its bomb bay doors and fuselage fuel tanks removed. The bomb was attached to an 800 kilogram parachute, which gave the release and observer planes time to fly about 45 kilometres (28 mi) away from ground zero. When detonation occurred, the Tu-95V fell one kilometer from its previous altitude due to the shock wave of the bomb. 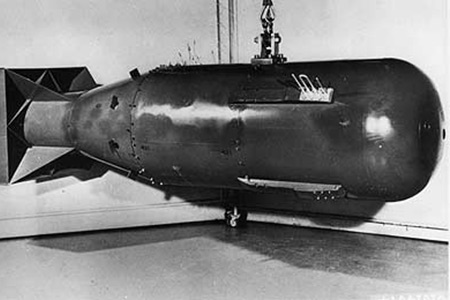 The fireball reached nearly as high as the altitude of the release plane and was visible at almost 1,000 kilometres (620 mi) away from where it ascended. The subsequent mushroom cloud was about 64 kilometres (40 mi) high (over seven times the height of Mount Everest), which meant that the cloud was above the stratosphere and well inside the mesosphere when it peaked. The cap of the mushroom cloud had a peak width of 95 kilometres (59 mi). 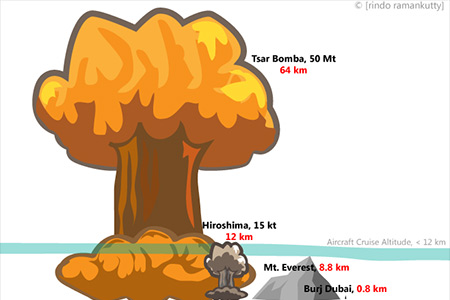 One participant in the test saw a bright flash through dark goggles and felt the effects of a thermal pulse even at a distance of 270 kilometres (170 mi). The heat from the explosion could have caused third-degree burns 100 km (62 mi) away from ground zero. A shock wave was observed in the air at Dikson settlement 700 kilometres (430 mi) away; windowpanes were partially broken to distances of 900 kilometres (560 mi). Atmospheric focusing caused blast damage at even greater distances, breaking windows in Norway and Finland. The seismic shock created by the detonation was measurable even on its third passage around the Earth. Its seismic body wave magnitude was about 5 to 5.25. The energy yield was around 8.1 on the Richter scale but, since the bomb was detonated in air rather than underground, most of the energy was not converted to seismic waves.

The Tsar Bomba is the single most physically powerful device ever used by mankind. By contrast, the largest weapon ever produced by the United States, the now-decommissioned B41, had a predicted maximum yield of 25 Mt, and the largest nuclear device ever tested by the United States (Castle Bravo) yielded 15 Mt (this was due to an unexpected runaway lithium-7 reaction; the preliminary prediction for the yield was from 4 to 6 MT). The largest weapons deployed by the Soviet Union were also around 25 Mt, as in the SS-18 Mod. 3 ICBM warheads. The weight and size of the Tsar Bomba limited the range and speed of the specially modified bomber carrying it and ruled out its delivery by an ICBM. Much of its high-yield destructiveness was inefficiently radiated upwards into space. It has been estimated that detonating the original 100 Mt design would have released fallout amounting to about 25 percent of all fallout emitted since the invention of nuclear weapons.

When Modern Technology Meets Classic Car Design, You Get the Mini Superleggera Vision