A sun dog is basically an atmospheric phenomenon that creates bright spots of light in the sky, often on a luminous ring or halo on either side of the sun. They may appear as a colored patch of light to the left or right of the sun, 22° distant and at the same distance above the horizon as the sun, and in ice halos. They can be seen anywhere in the world during any season, but they are not always obvious or bright. Sundogs are best seen and are most conspicuous when the sun is low. 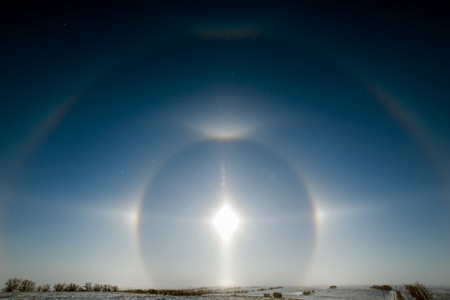 Sundogs are commonly made by the refraction of light from plate-shaped hexagonal ice crystals in high and cold cirrus clouds or, during very cold weather, these ice crystals are called diamond dust, and drift in the air at low levels. These crystals act as prisms, bending the light rays passing through them with a minimum deflection of 22°. If the crystals are randomly oriented, a complete ring around the sun is seen – a halo. 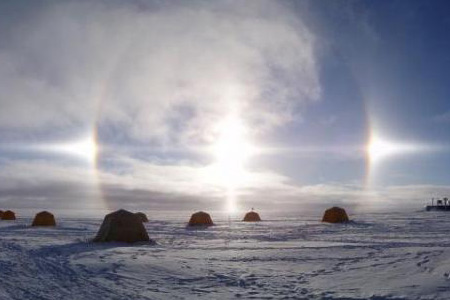 Sundogs are red-colored at the side nearest the sun. Farther out the colors grade through oranges to blue. However, the colors overlap considerably and so are muted, never pure or saturated. The colors of the sundog finally merge into the white of the parhelic circle (if the latter is visible). 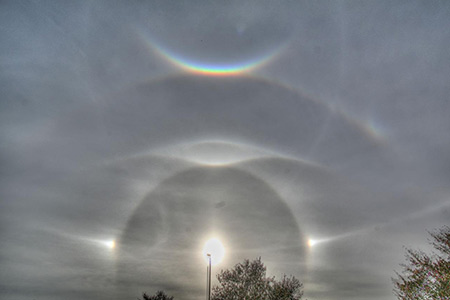 It is possible to predict the forms of sundogs as would be seen on other planets and moons. Mars might have sundogs formed by both water-ice and CO2-ice. On the giant gas planets – Jupiter, Saturn, Uranus and Neptune – other crystals form the clouds of ammonia, methane, and other substances that can produce halos with four or more sundogs.

2. Origin of the Word 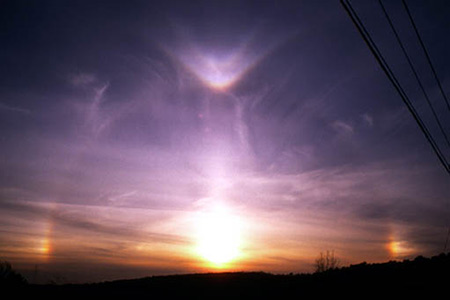 In Abram Palmer’s 1882 book Folk-etymology: A Dictionary of Verbal Corruptions Or Words Perverted in Form Or Meaning, by False Derivation Or Mistaken Analogy, sun-dogs are defined: “The phenomena [sic] of false suns which sometimes attend or dog the true when seen through the mist (parhelions). In Norfolk a sun-dog is a light spot near the sun, and water-dogs are the light watery clouds; dog here is no doubt the same word as dag, dew or mist as “a little dag of rain.” 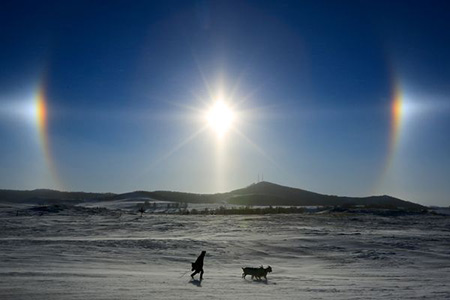 Aristotle (Meteorology III.2, 372a14) notes that “two mock suns rose with the sun and followed it all through the day until sunset.” He says that “mock suns” are always to the side, never above or below, most commonly at sunrise or sunset, more rarely in the middle of the day.

Lamborghini Rat Rod Unveiled, Might be the Coolest Hot Rod Ever