The image above of a “blue moon” (second full moon in a month) was captured by Simon Smith. It was “taken just hours before the exact full phase in delightfully clear skies over Nottingham, UK, it features eye-catching bright rays extending from the prominent young crater Tycho in the Moon’s southern hemisphere.” Continue reading to see more. 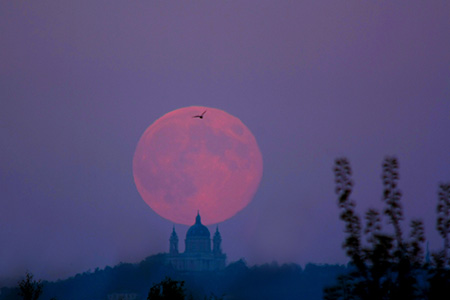 A Full Moon rising can be a dramatic celestial sight, and Full Moons can have many names. For example, Monday’s Full Moon was the one nearest this year’s autumnal equinox for the northern hemisphere, traditionally called the Harvest Moon.

According to lore the name is a fitting one because farmers could work late into the night at the end of the growing season harvesting crops by moonlight. This serene telephoto image captures this September’s harvest moonrise from Turin, Italy. In silhouette against an orange lunar disk is Turin’s hilltop Basilica of Superga. 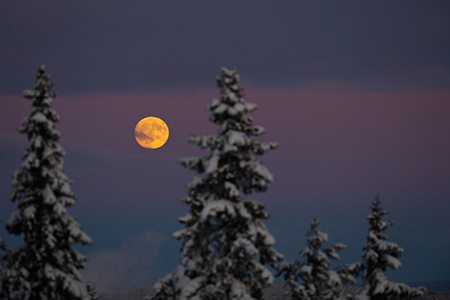 A Full Moon rising can be a dramatic celestial sight, and Full Moons can have many names. Captured on January 8 from Ostersund, Sweden, this evocative moonrise portrait might make you feel the cold of winter in the north. If you can also imagine wolves howling in the distance then you probably understand why Native Americans would have called it the Wolf Moon, their traditional name for the first Full Moon in January.

The photographer reports that no wolves were heard though, as he watched this beautiful Full Moon rise in fading light over the eastern horizon, echoing the yellow color of the setting Sun. 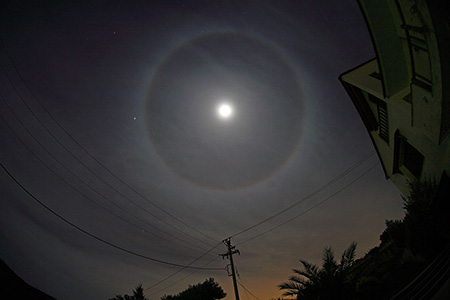 Have you ever seen a halo around the Moon? This fairly common sight occurs when high thin clouds containing millions of tiny ice crystals cover much of the sky. Each ice crystal acts like a miniature lens. Because most of the crystals have a similar elongated hexagonal shape, light entering one crystal face and exiting through the opposing face refracts 22 degrees, which corresponds to the radius of the Moon Halo.

A similar Sun Halo may be visible during the day. The setting of the above picture is Athens, Greece. The distant planet Jupiter appears by chance on the halo’s left. Exactly how ice-crystals form in clouds remains under investigation. 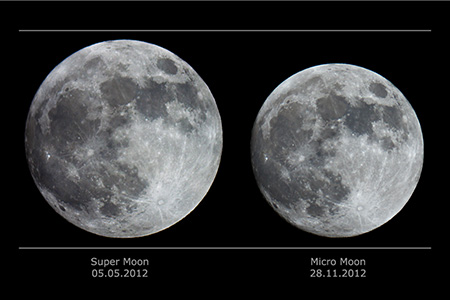 Did you see the big, bright, beautiful Full Moon Wednesday night? That was actually a Micro Moon! On that night, the smallest Full Moon of 2012 reached its full phase only about 4 hours before apogee, the most distant point from Earth in the Moon’s elliptical orbit. Of course, earlier this year on May 6, a Full Super Moon was near perigee, the closest point in its orbit.

The relative apparent size of November 28’s Micro Moon (right) is compared to the famous May 6 Super Moon in these two panels, matching telescopic images from Bucharest, Romania. The difference in apparent size represents a difference in distance of just under 50,000 kilometers between apogee and perigee, given the Moon’s average distance of about 385,000 kilometers. How long do you have to wait to see another Full Micro Moon? Until January 16, 2014, when the lunar full phase will occur within about 3 hours of apogee.

1. Driving on the Moon

What would it be like to drive on the Moon? You don’t have to guess — humans have actually done it. Pictured above, Apollo 16 astronauts John Young and Charles Duke recorded video during one such drive in 1972, with a digital version now available on the web. No matter which direction it headed, the Lunar Rover traveled a path literally covered with rocks and craters.

The first half of the above video shows the rover zipping about a moonscape near 10 kilometers per hour, while the second half shows a dash-cam like view. The Lunar Rover was deployed on the later Apollo missions as a way for astronauts to reach and explore terrain further from the Lunar Module basecamp than was possible by walking in cumbersome spacesuits. Possible future lunar missions that might deploy robotic rovers capable of beaming back similar videos include those by China, Russia, India, and Google X-Prize contestants.