A ring galaxy is basically a galaxy with a circle-like appearance. Hoag’s Object, discovered by Art Hoag in 1950, is an example of a ring galaxy. The ring contains many massive, relatively young blue stars, which are extremely bright. The central region contains relatively little luminous matter. Above, we have NGC 922, a ring galaxy created by the collision of a large and small galaxy about 300 million years ago. Continue reading to see more. 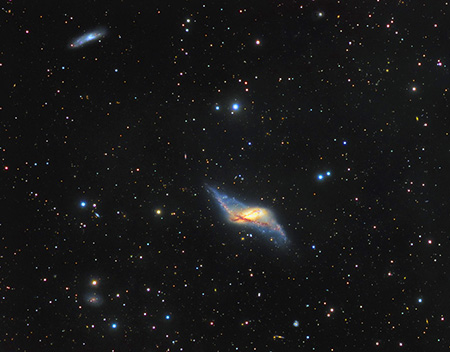 NGC 660 lies near the center of this intriguing field of galaxies swimming within the boundaries of the constellation Pisces. Over 20 million light-years away, its peculiar appearance marks it as a polar ring galaxy.

A rare galaxy type, polar ring galaxies have a substantial population of stars, gas, and dust orbiting in rings nearly perpendicular to the plane of a flat galactic disk. The bizarre configuration could have been caused by the chance capture of material from a passing galaxy by the disk galaxy, with the captured debris strung out in a rotating ring. Polar Ring galaxies can be used to explore the shape of the galaxy’s otherwise unseen dark matter halo by calculating the dark matter’s gravitational influence on the rotation of the ring and disk. Broader than the disk, NGC 660’s ring spans about 40,000 light-years. 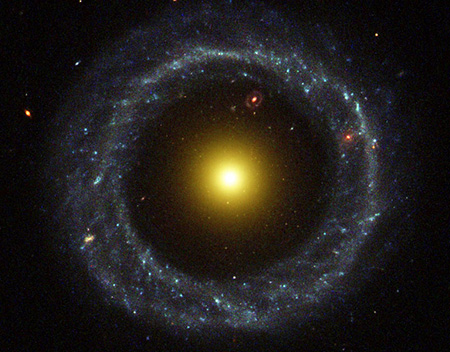 Is this one galaxy or two? This question came to light in 1950 when astronomer Art Hoag chanced upon this unusual extragalactic object. On the outside is a ring dominated by bright blue stars, while near the center lies a ball of much redder stars that are likely much older. Between the two is a gap that appears almost completely dark. How Hoag’s Object formed remains unknown, although similar objects have now been identified and collectively labeled as a form of ring galaxy. Genesis hypotheses include a galaxy collision billions of years ago and the gravitational effect of a central bar that has since vanished.

The above photo taken by the Hubble Space Telescope in July 2001 reveals unprecedented details of Hoag’s Object and may yield a better understanding. Hoag’s Object spans about 100,000 light years and lies about 600 million light years away toward the constellation of the Snake (Serpens). Coincidentally, visible in the gap (at about one o’clock) is yet another ring galaxy that likely lies far in the distance. 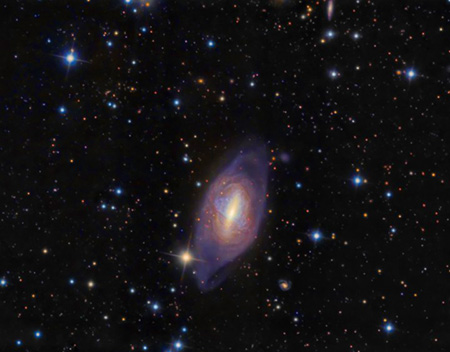 NGC 2685 is a confirmed polar ring galaxy – a rare type of galaxy with stars, gas and dust orbiting in rings perpendicular to the plane of a flat galactic disk. The bizarre configuration could be caused by the chance capture of material from another galaxy by a disk galaxy, with the captured debris strung out in a rotating ring.

Still, observed properties of NGC 2685 suggest that the rotating ring structure is remarkably old and stable. In this fascinating view of the peculiar system also known as Arp 336 or the Helix galaxy, the strange, perpendicular rings are easy to trace as they pass in front of the galactic disk, along with other disturbed outer structures. NGC 2685 is about 50,000 light-years across and 40 million light-years away in the constellation Ursa Major. 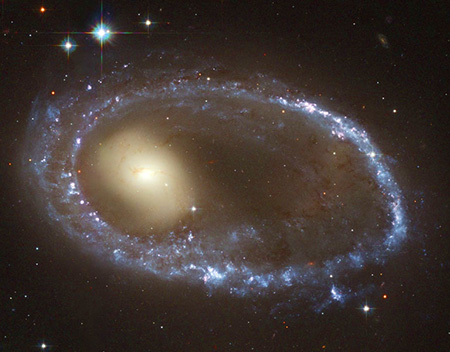 How could a galaxy become shaped like a ring? The rim of the blue galaxy pictured on the right is an immense ring-like structure 150,000 light years in diameter composed of newly formed, extremely bright, massive stars. That galaxy, AM 0644-741, is known as a ring galaxy and was caused by an immense galaxy collision. When galaxies collide, they pass through each other — their individual stars rarely come into contact. The ring-like shape is the result of the gravitational disruption caused by an entire small intruder galaxy passing through a large one.

When this happens, interstellar gas and dust become condensed, causing a wave of star formation to move out from the impact point like a ripple across the surface of a pond. The intruder galaxy has since moved out of the frame taken by the Hubble Space Telescope and released to commemorate the anniversary of Hubble’s launch in 1990. Ring galaxy AM 0644-741 lies about 300 million light years away.

NGC 4650A appears to be two galaxies in one. A rare type of galaxy known as a Polar Ring, NGC 4650A is composed of an old central group of stars and a young ring of stars rotating farther out. Both components are clearly visible in this featured photograph by the Hubble Space Telescope.

What creates Polar Ring Galaxies is still being researched, but a leading theory is the collision of two distinct galaxies in the distant past. Polar Ring Galaxies allow astronomers to estimate the amount of dark matter in galaxies by measuring the rotation rate of the highly extended ring. An unknown type of dark matter is implied because the ring typically rotates too fast to be held together by only the visible stars.

PlayStation 4 Officially Announced with DualShock 4, Set For Release This Winter