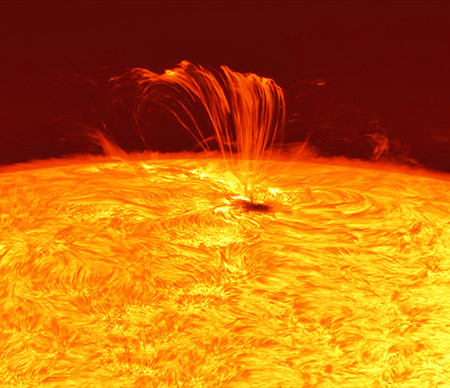 AR 1302 first came around the Sun’s edge last week and is so large it can be seen without a telescope. Coronal Mass Ejections from AR 1302 have already caused strong geomagnetic storms including notable aurora activity around both of Earth’s poles. Pictured above, plasma was left magnetically hanging above the Sun’s surface after AR 1302 emitted an X-class solar flare last Thursday. Earth is illustrated in the inset for a size comparison. Although another X-class flare was emitted on Saturday, no flares from AR 1302 have been aimed directly at the Earth, as yet. 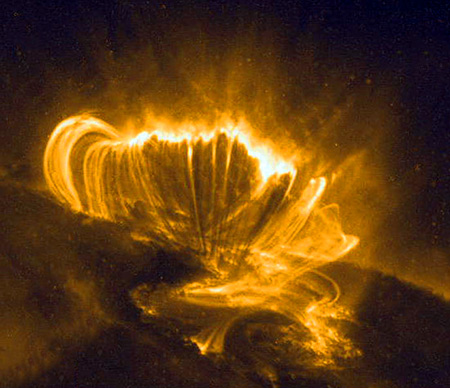 Why does the Sun flare? Unpredictably, our Sun unleashes tremendous flares expelling hot gas into the Solar System that can affect satellites, astronauts, and power grids on Earth. This close up of an active region on the Sun that produced a powerful X-class flare was captured by the orbiting TRACE satellite. Clicking on the image should bring up a movie that shows the evolution of Active Region 9906 over about four hours. The glowing gas flowing around the relatively stable magnetic field loops above the Sun’s photosphere has a temperature of over ten million degrees Celsius. These flows occurred after violently unstable magnetic reconnection events above the Sun produced the flare. 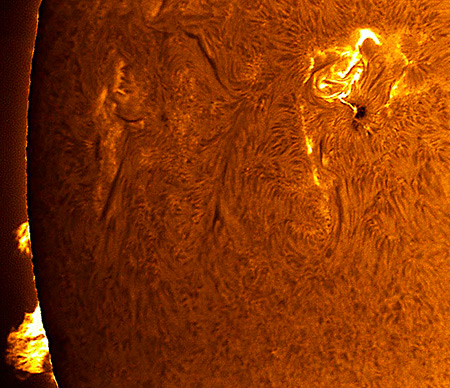 An unusually active sunspot region is now crossing the Sun. The region, numbered 875, is larger than the Earth and has produced several solar flares over the past week. It should take a few more days for Sunspot 875 to finish crossing the solar disk. The above image of the Sun was taken last Wednesday in a very specific color of red light to bring up detail. Sunspot 875, in the midst of erupting a large Class C solar flare, can be seen as the dark region to the upper right. In the above image, relatively cool regions appear dark while hot regions appear bright. On the far left, solar prominences are visible hovering above the Sun’s surface. 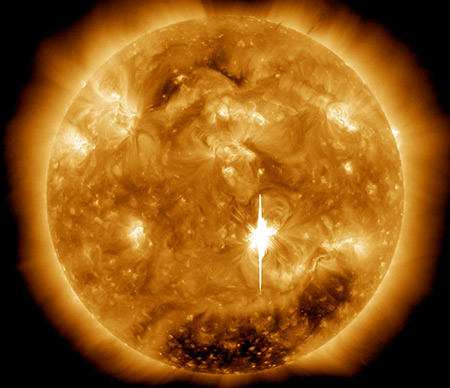 On Valentine’s Day (ET) the Sun unleashed one of its most powerful explosions, an X-class flare. The blast was the largest so far in the new solar cycle. Erupting from active region AR1158 in the Sun’s southern hemisphere, the flare is captured here in this extreme ultraviolet image from the Solar Dynamics Observatory (SDO). The intense burst of electromagnetic radiation momentarily overwhelmed pixels in SDO’s detectors causing the bright vertical blemish. This X-class flare was also accompanied by a coronal mass ejection (CME), a massive cloud of charged particles traveling outward at nearly 900 kilometers per second. 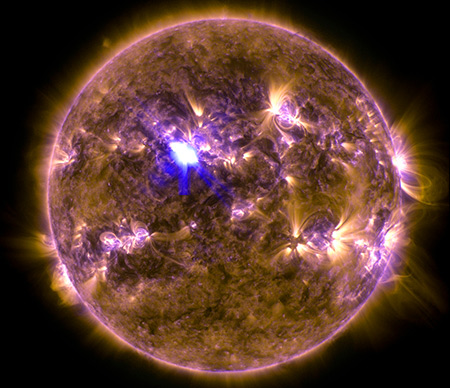 A false-color composite image in extreme ultraviolet light from the Solar Dynamics Observatory captures the moment, recorded on April 11 at 0711 UTC. The flash, a moderate, M6.5 class flare erupting from active region AR 11719, is near the center of the solar disk. Other active regions, areas of intense magnetic fields seen as sunspot groups in visible light, mottle the surface as the solar maximum approaches. Loops and arcs of glowing plasma trace the active regions’ magnetic field lines.

X-rays and UV radiation emitted by solar flares can affect Earth’s ionosphere and disrupt long-range radio communications. Direct radio emission at decimetric wavelengths may disturb operation of radars and other devices operating at these frequencies. Solar flares were first observed on the Sun by Richard Christopher Carrington and independently by Richard Hodgson in 1859 as localized visible brightenings of small areas within a sunspot group. Stellar flares have also been observed on a variety of other stars.