Venus is the second planet from the Sun, orbiting it every 224.7 Earth days. The planet is named after the Roman goddess of love and beauty. After the Moon, it is the brightest natural object in the night sky, reaching an apparent magnitude of −4.6, bright enough to cast shadows. Above, we see the Venus Transit against an evocative backdrop of the turbulent solar surface with prominences lofted above the Sun’s edge by twisting magnetic fields. The thin ring of light seen surrounding the planet’s dark silhouette is sunlight refracted by Venus’ thick atmosphere. Continue reading for more. 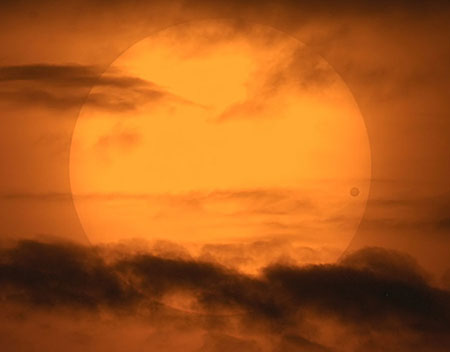 The rare transit of Venus across the face of the Sun in 2004 was one of the better-photographed events in sky history. Both scientific and artistic images flooded in from the areas that could see the transit: Europe and much of Asia, Africa, and North America. Scientifically, solar photographers confirmed that the black drop effect is really better related to the viewing clarity of the camera or telescope than the atmosphere of Venus.

Artistically, images might be divided into several categories. One type captures the transit in front of a highly detailed Sun. Another category captures a double coincidence such as both Venus and an airplane simultaneously silhouetted, or Venus and the International Space Station in low Earth orbit. A third image type involves a fortuitous arrangement of interesting looking clouds, as shown by example in the above image taken from North Carolina, USA.

4. Moon and Venus Over Switzerland 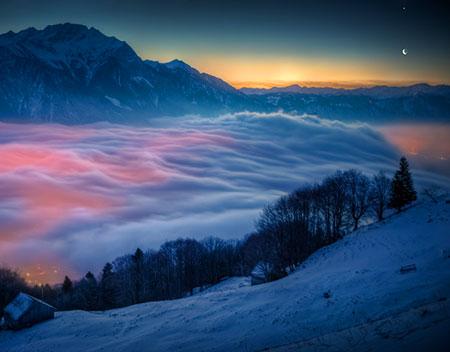 Sometimes a morning sky can be a combination of serene and surreal. Such a sky perhaps existed before sunrise this past Sunday as viewed from a snowy slope in eastern Switzerland. Quiet clouds blanket the above scene, lit from beneath by lights from the village of Trubbach. A snow covered mountain, Mittlerspitz, poses dramatically on the upper left, hovering over the small town of Balzers, Liechtenstein far below.

Peaks from the Alps can be seen across the far right, just below the freshly rising Sun. Visible on the upper right are the crescent Moon and the bright planet Venus. Venus will remain in the morning sky all month, although it will likely not be found in such a photogenic setting. 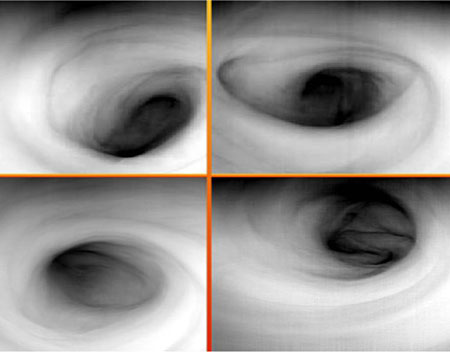 What’s happening over the South Pole of Venus? To find out, scientists have been studying images taken by the robotic Venus Express spacecraft when it passes over the lower spin axis of Earth’s overheated twin. Surprisingly, recent images from Venus Express do not confirm previous sightings of a double storm system there, but rather found a single unusual swirling cloud vortex.

In the above recently released image sequence taken in infrared light and digitally compressed, darker areas correspond to higher temperatures and hence lower regions of Venus’ atmosphere. Also illuminating are recently released movies, which show similarities between Venus’ southern vortex and the vortex that swirls over the South Pole of Saturn. Understanding the peculiar dynamics of why, at times, two eddies appear, while at other times a single peculiar eddy appears, may give insight into how hurricanes evolve on Earth, and remain a topic of research for some time. In three months, the European Venus Express spacecraft will be joined around Venus by the Japanese Akatsuki satellite. 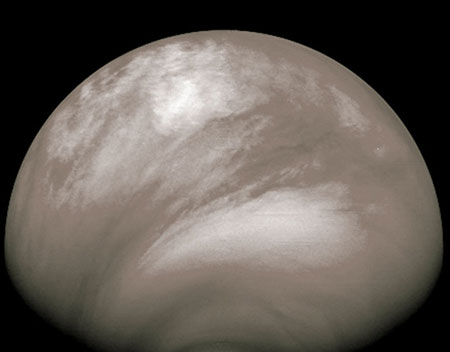 Why did an acidic haze spread across Venus? The unusual clouds were discovered last July by ESA’s robotic Venus Express spacecraft currently orbiting Venus. The bright and smooth haze was found by Venus Express to be rich in sulfuric acid, created when an unknown process lifted water vapor and sulfur dioxide from lower levels into Venus’ upper atmosphere.

There, sunlight broke these molecules apart and some of them recombined into the volatile sulfuric acid. Over the course of just a few days last July, the smooth acidic clouds spread from the South Pole of Venus across half the planet. The above false-color picture of Venus was taken last July 23rd in ultraviolet light, and shows the unusual haze as relatively smooth regions across the image bottom. The cause of the dark streaks in the clouds is also not yet understood and is being researched. 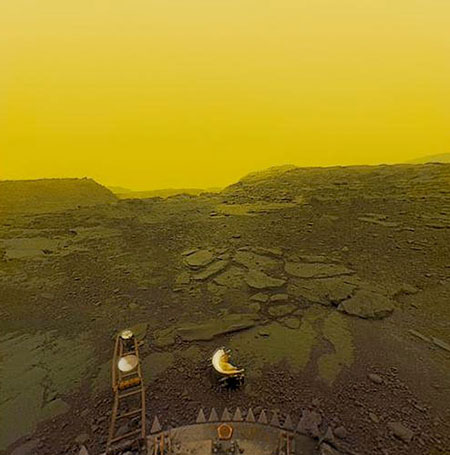 Venus is classified as a terrestrial planet and is sometimes called Earth’s “sister planet” owing to their similar size, gravity, and bulk composition (Venus is both the closest planet to Earth and the planet closest in size to Earth). However, it has been shown to be very different from Earth in other respects. Venus is shrouded by an opaque layer of highly reflective clouds of sulfuric acid, preventing its surface from being seen from space in visible light.

It has the densest atmosphere of the four terrestrial planets, consisting mostly of carbon dioxide. The atmospheric pressure at the planet’s surface is 92 times that of Earth’s. With a mean surface temperature of 735 K (462 °C; 863 °F), Venus is by far the hottest planet in the Solar System. It has no carbon cycle to lock carbon back into rocks and surface features, nor does it seem to have any organic life to absorb it in biomass.

Venus may have possessed oceans in the past, but these would have vaporized as the temperature rose due to the runaway greenhouse effect. The water has most probably photodissociated, and, because of the lack of a planetary magnetic field, the free hydrogen has been swept into interplanetary space by the solar wind. Venus’s surface is a dry desertscape interspersed with slab-like rocks and periodically refreshed by volcanism.