No, we’re not talking about the weird shapes you often see in the sky, but rather real mind-blowing cloud formations that look to be out of this world. First up, we have a stunning undulatus asperatus cloud formation, which usually forms over the Plains states in the US. Continue reading to see more. 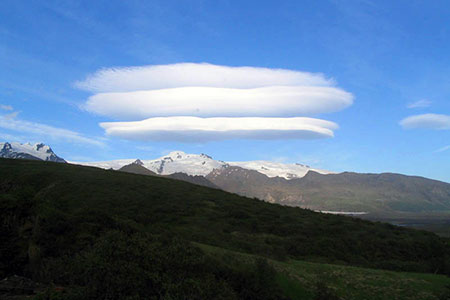 Where stable moist air flows over a mountain or a range of mountains, a series of large-scale standing waves may form on the downwind side. If the temperature at the crest of the wave drops to the dew point, moisture in the air may condense to form lenticular clouds. As the moist air moves back down into the trough of the wave, the cloud may evaporate back into vapor. 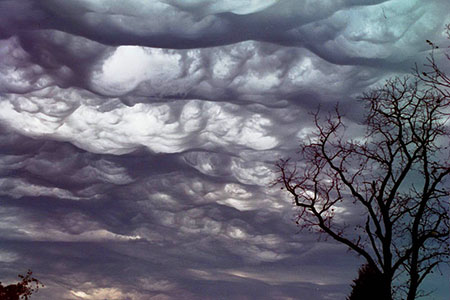 Undulatus asperatus (or alternately, asperatus) is a cloud formation, proposed in 2009 as a separate cloud classification by the founder of the Cloud Appreciation Society. If successful it will be the first cloud formation added since cirrus intortus in 1951 to the International Cloud Atlas of the World Meteorological Organization. The name translates approximately as roughened or agitated waves

The clouds are most closely related to undulatus clouds. Although they appear dark and storm-like, they tend to dissipate without a storm forming. The ominous-looking clouds have been particularly common in the Plains states of the United States, often during the morning or midday hours following convective thunderstorm activity. 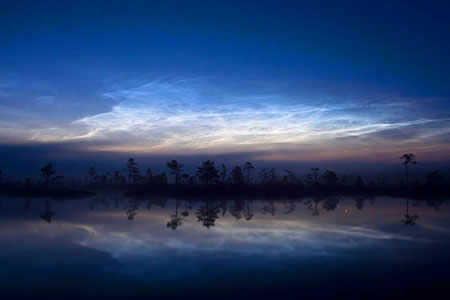 Night clouds or noctilucent clouds are tenuous cloud-like phenomena that are the “ragged-edge” of a much brighter and pervasive polar cloud layer called polar mesospheric clouds in the upper atmosphere, visible in a deep twilight. They are made of crystals of water ice. The name means roughly night shining in Latin. They are most commonly observed in the summer months at latitudes between 50° and 70° north and south of the equator.

They are the highest clouds in the Earth’s atmosphere, located in the mesosphere at altitudes of around 76 to 85 kilometres (47 to 53 mi). They are normally too faint to be seen, and are visible only when illuminated by sunlight from below the horizon while the lower layers of the atmosphere are in the Earth’s shadow. 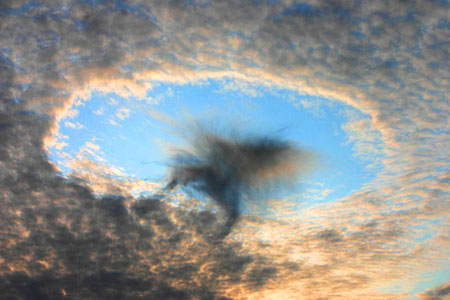 A fallstreak hole, also known as a hole punch cloud, punch hole cloud, canal cloud or cloud hole, is a large circular gap that can appear in cirrocumulus or altocumulus clouds. Such holes are formed when the water temperature in the clouds is below freezing but the water has not frozen yet due to the lack of ice nucleation particles. When a portion of the water does start to freeze it will set off a domino effect, due to the Bergeron process, causing the water vapor around it to freeze and fall to the earth as well.

This leaves a large, often circular, hole in the cloud. It is believed that a disruption in the stability of the cloud layer, such as that caused by a passing jet, may induce the domino process of evaporation which creates the hole. Such clouds are not unique to any one geographic area and have been photographed from the United States to Russia. Because of their rarity and unusual appearance, fallstreak holes are often mistaken for or attributed to unidentified flying objects. 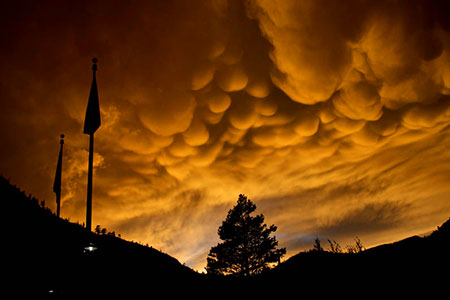 Mammatus, also known as mammatocumulus (meaning “mammary cloud” or “breast cloud”), is a meteorological term applied to a cellular pattern of pouches hanging underneath the base of a cloud. The name mammatus, derived from the Latin mamma (meaning “udder” or “breast”), refers to a resemblance between the characteristic shape of these clouds and the breast of a woman.

Mammatus are most often associated with the anvil cloud and also severe thunderstorms. They often extend from the base of a cumulonimbus, but may also be found under altocumulus, altostratus, stratocumulus, and cirrus clouds, as well as volcanic ash clouds.